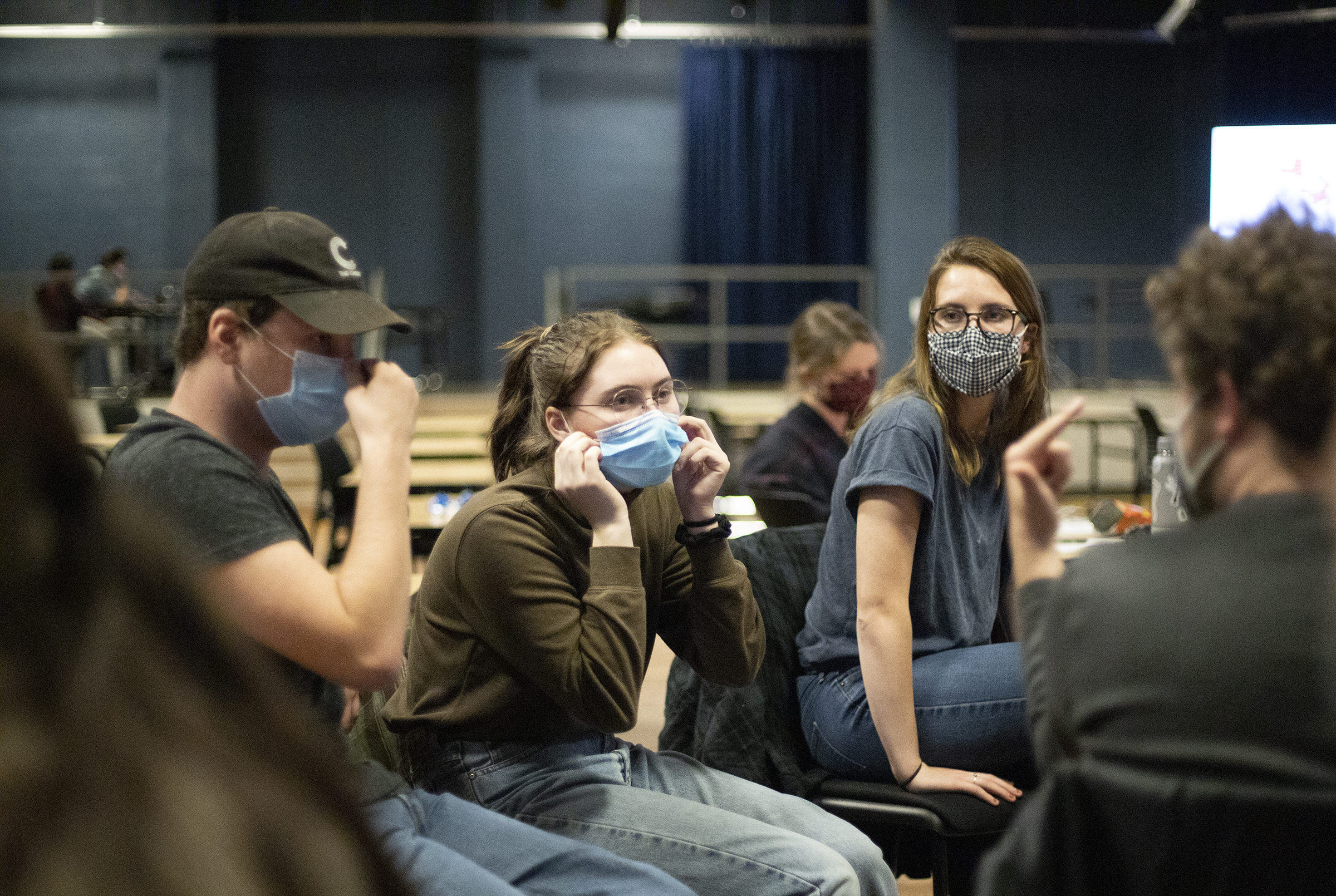 Christopher Moore went to his professor’s home and joined his fellow students on couches and chairs for a watch party for the 1996 presidential election when he was a freshman in college. Now, as an Associate Professor of Political Science at Bethel, he is helping to host a watch party with other political science professors Andy Bramsen and Matthew Kuchem. Although it is difficult to match the hospitable warmth of home, the desolate halls of the Brushaber Commons echo with the distant chatter, laughing, and ABC news coverage stemming from The Underground.

Bethel students gathered in the underground Nov. 3 for the Election Shock Therapy watch party. Attendees wheeled the chairs into circles with their friends as others popped up and down the stairs shouting to their friends as they arrived at the party or return from grabbing some cling-wrapped cookies from the snack table at the entrance. As America becomes more polarized, Bethel still offers a united community with groups supporting both parties coming to the party to enjoy each other’s company and talk politics.

“An American bonfire” is how Bethel Junior Michael Judd described the event. “You get together with your friends and talk about the things that matter.”

Gratitude seemed to flow throughout the event as the party was able to occur despite any Covid-19 restrictions which have been preventing social gatherings.

“I’m grateful that we have this space on campus,” Professor Moore said. “This is a tense moment so the turnout is very encouraging.”

The idea of the watch party starts with tradition and ends with a podcast.

“It’s sort of tradition,” Moore explained Tuesday night. “We’ve been doing election watch parties as least as far back as 2008, and maybe before that. So, we kind of have a tradition and even in this weird COVID world of social-distancing and mask-wearing, we still want people together to mark this momentous time, but also hopefully be a service to the university, and answer students’ questions as they’re happening in real time.”

Moore went on to explain that he, Assistant Professor of Political Science Matthew Kuchem and Associate Professor of Political Science Andrew Bramsen host a regular podcast entitled, “Election Shock Therapy,” and during the watch party, they planned to do some “micro-pods” live during the proceedings and field questions from the audience and commentate on what was going on on the screen.

The large screen on the front stage of the Underground played ABC News’ Election Coverage. At 6 p.m. when the event began, everyone was trying to be patient.

“This election is one that is extremely contentious and there’s a lot of concern floating around about the legitimacy of the election, and whether or not the results will be valid and a lot of Americans are worried about that,” said Kuchem, who explained the exorbitant amount of mail-in ballots will cause the election results to likely take longer.

Sophie Hoffer is an upperclassman in Bethel’s political science department.

Both said the party was a good experience.

“Being a club leader for Model UN, it’s important to be informed about politics in America and also being an upperclassmen in the political science department, it’s also important to come and show up and support, and also like being informed …,” Hoffer said.

“I just came ‘cause, I mean, politics is, like, pretty new to me,” Stoll said. “It’s my first presidential election and all, and I don’t know very much, so I just want to see like how this unfolds and how it’s, like, different from other elections and, I mean, I know I’m here and it’s, like, 6:45, but I’m like eager to see what it ends up being even though I don’t know if they’ll know tonight.”

Moore said the event was to draw to both these audiences.

Grace Jacobs sat at a desk in the Underground Tuesday night next to roommate and close friend Greta Meleen. Both freshmen sipped strawberry smoothies and discussed live election results, engaging in friendly conversation despite their differing political affiliations.

Jacobs, an elementary education major, cast her ballot for Joe Biden because her political beliefs aligned more with his, while Meleen cast her vote for Donald Trump for the same reason. Despite their political differences, Jacobs and Meleen are best friends.

“I love her,” Jacobs said about Meleen. “She is a kindhearted, genuine person who is just able to brighten up the world.”

Jacobs and Meleen say they have never allowed politics to negatively affect their friendship, instead using their differences as a form of enlightenment and learning from each others’ viewpoints and opinions.

Jacobs believes faith ties into politics in several ways. She is a firm believer in doing what Jesus would do, putting an emphasis on making sure everyone feels loved and is not being subjected to negativity or racism.

“Jesus went to the Gentiles,” Jacobs said, “and he went to the Jews, and he didn’t discriminate on what you believe or what you look like … He went to you because he loved you, and I believe that everyone is loved.”

Jacobs hopes Bethel’s environment will remain respectful following the election and that students will be able to make responsible, Christ-driven decisions. She says she is not worried because of the positive messages Bethel faculty has been spreading.

“Christ is your number one identifier,” said Jacobs, echoing a recent “Faith and Politics” sermon. “And I expect and hope that everyone upholds that.”

Early in the night, Political Science Professor Andy Bramsen said Biden was a likely winner of the presidency but expects votes to be tight. According to Bramsen, unexpected results bring tension, but Bethel has been calm regarding election aftermaths in the past. He emphasized the importance of keeping language in political dialogue respectful rather than inflammatory and encouraged students to think about rebuilding a community, not just at Bethel, but beyond.

“How do we live together and acknowledge that difference,” Bramsen asked, “and still then say, ‘What are the things that unite us that can draw us together?’ ”

“If you’re able to respect each other aside from every possible difference,” Jacobs said, “the world will just be more Christ-like. You’re going to become a community that is united rather than divided.”