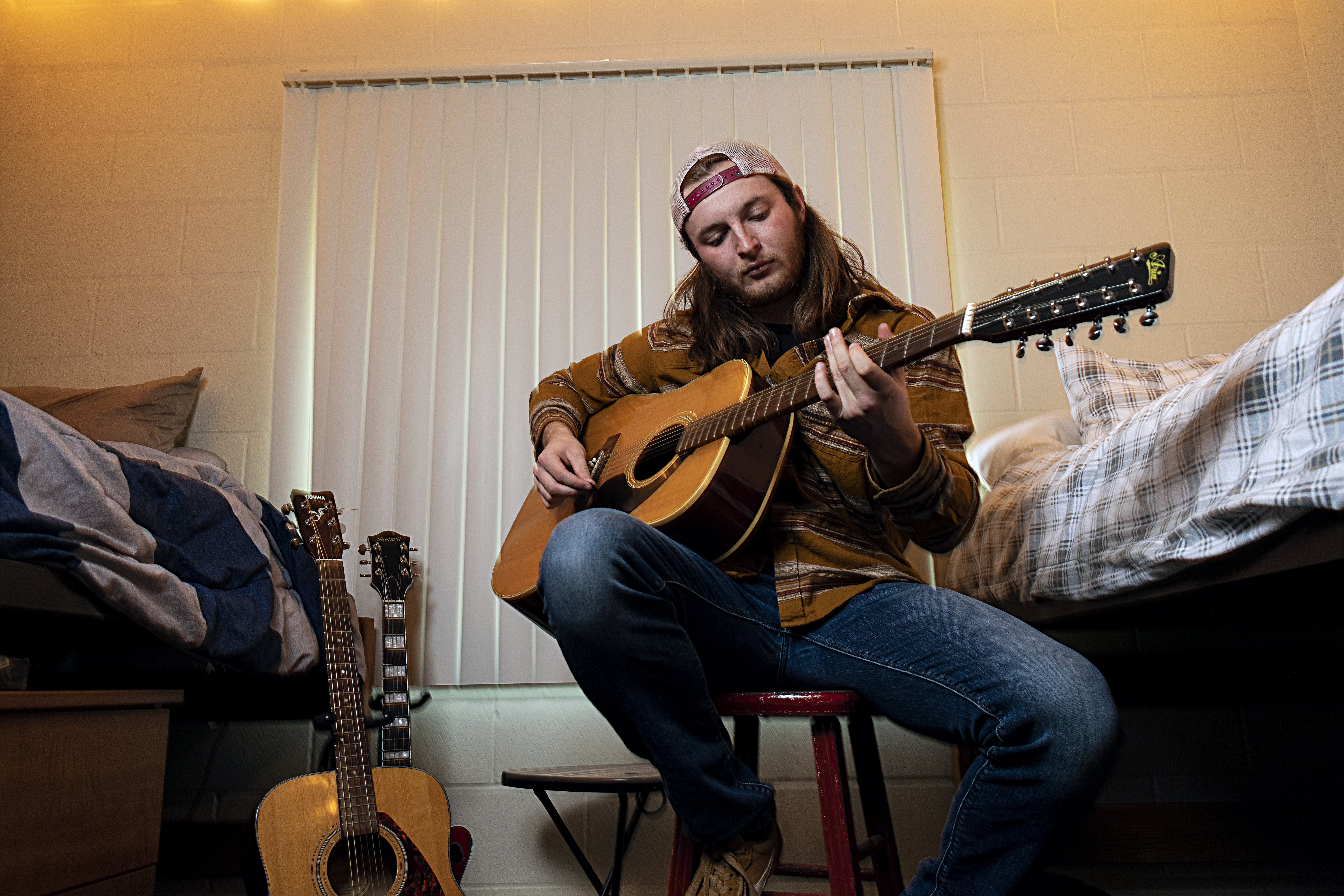 Seniors Kiernan Tollefson, Weston Wold and Landon Conrath make a name for themselves on streaming platforms and in concert.

Bethel University is home to vocalists and instrumentalists alike who have been working to establish themselves in the music industry. According to three of these artists, none of whom are music majors, a degree is not crucial to pursuing music as a career.

Kiernan Tollefson grew up playing an old Kawai piano in his living room, well worn from the hands of his mom and siblings before him. Five years ago, severe illness bound him to the couch for three wintry months, so he decided to teach himself guitar. He would listen to rock songs and play along on a Yamaha F325.

Tollefson is not currently in a band, but it is a part of his future plan. Last year, his band chose to take a break to focus on individual music, but Tollefson loved the improvisation and collaboration that came with being in a group. A band member would show up with a riff or a song structure in mind and engage in a cycle of playing and feedback.

All of Tollefson’s songs are original. A few of his friends help out with production and Tollefson said they have been a large part of figuring out the nuances of recording.

COVID-19 halted what were supposed to be Tollefson’s debut performances this year, but he hopes to start playing shows this spring or early summer.

“Music is an escape,” Tollefson said. “I have had a lot of difficult things happen in my life and music, both listening and playing, was one of my main outlets. You can really create your own world and pretend that everything is going to be alright when you escape into it.”

Tollefson’s six-song album,“The Wandering,” is available for streaming. He plans to release two or three singles this winter and another album in the spring.

Weston Wold enrolled at Bethel as a double major in communications and music. While he remains a part of the Bethel Choir, he has since dropped his music major to pursue building relationships in a professional setting. He plays guitar, piano and ukulele but considers his voice his main instrument.

Wold aims to use his music to reach those who do not yet know Christ. He wants his lyrics to invoke questions about faith. In addition to being on a Vespers worship team, he performs at Emmanuel Christian Center in Spring Lake Park, where he met producer Mark Alan Schoolmeester, who has written for Hillsong and worked with Owl City.

His songwriting process begins with lyrics before he sits down at a piano to write out chords and instrumentation. He finds a song’s melody, direction and message, which he thinks is the most important step. Written songs are sent to production, where Wold bounces around ideas for improvements. He describes his vision and sound and his producers take care of the rest.

Wold has released seven songs, five of which are in an EP he released his sophomore year, but he has written around 300 songs. He says nine out of 10 songs will be garbage, but one in 10 has a potential to be something greater.

His next release will be in February 2021. An acoustic version of his newest song “Shimmer” dropped Oct. 30. Wold calls “Shimmer” his favorite because of how personal it is. He intended it to be a love song about the start of a relationship, but became stuck after writing the first half of the song.

“I figured out it’s not a love song,” Wold said. “It’s a story starting and a story ending in a relationship. The second half is the relationship falling apart and the two people realizing that they need to work on themselves before they actually go after pursuing each other.”

Two of Wold’s shows were canceled due to COVID-19, but he has performed live twice in Minneapolis and once in Brooklyn Park.

“They’re just so much fun,” Wold said of his concerts. “They’re just on another level. Just having people there that know your songs and who are also just wanting to have a fun night, and just the energy that’s created, is awesome.”

Landon Conrath started piano lessons at age five, and he hated every second of it. In eighth grade, he quit piano and learned to play drums. But, after being hit by a car while biking and breaking his wrist, he couldn’t drum, so he resorted to playing piano and singing. He would sit at the piano, listening to his favorite songs and trying to recreate them by ear.

At age 17, Conrath spent two summer months in a van with a band called Harbor & Home and played drums at festivals across the nation.

“In that context, I definitely prefer group music,” Conrath said. “Playing music by yourself is just not one percent as fun as playing it with your best friends.”

Conrath, a senior Vespers team lead, has been doing worship music at church since age 14. He performs frequently at Eagle Brook Church, where he sometimes feels conflicted about the authenticity of worship and his paycheck.

“I think I always am going to write through the lens of a Christian person, but none of the songs are super overtly about faith,” Conrath said. “I think living as a holistic Christian taps into every aspect of your life, so some of the themes that I’m writing about have to do with that.”

For Conrath, the production process begins by creating a sound bed and bringing it to his co-producer Alex Kimball to work on melodies and lyrics. Conrath believes that melody is the most important part of a song because it’s what people remember. Lyrics come last, often using a website called RhymeZone, on which users enter a word and are provided with a number of rhyme options sorted by syllables.

Conrath’s latest song, “Jericho,” was repackaged with his other three singles as an EP titled “Paperbacks and Perfume” and released Oct. 30. Conrath looks forward to dropping eight more songs after New Year’s.

According to Conrath, music has the power to turn a horrible day into a good one or the power to accentuate whatever he is feeling in the moment. His former drum instructor always told him, “Good music accompanies your mood, but great music hijacks it.”

Conrath’s most popular song,“Acetone,” focuses on a character trying to convince himself that he no longer misses a former lover. Conrath plans on releasing an acoustic version on Spotify in the near future.

He also loves the community that music builds. “The people I’ve met playing music are some of the best in the entire world,” he said. “I would never ask for anything else other than just like playing music with my best friends. That’s my favorite thing to do.”

While the three artists see music as a viable option, they acknowledge that having a Plan B is necessary while working toward their goals.

Tollefson would love to do music full-time in a band. In the meantime, he will use his degrees in history and digital humanities to get a job. Wold also aims to pursue music, but is otherwise looking into human resources with his degrees in relational and organizational communications.

According to Conrath, in contemporary music, musicians are hired for talent rather than content of a resume. His computer science degree may lead to some web development on the side of his musical career.

“Success, for me, looks like paying rent and eating food every month and paying for it with music,” Conrath said. “That’s kind of the goal, just survive. But do it playing music, because I can’t see myself really doing anything else.”

0 comments on “Bethel artists on the rise”