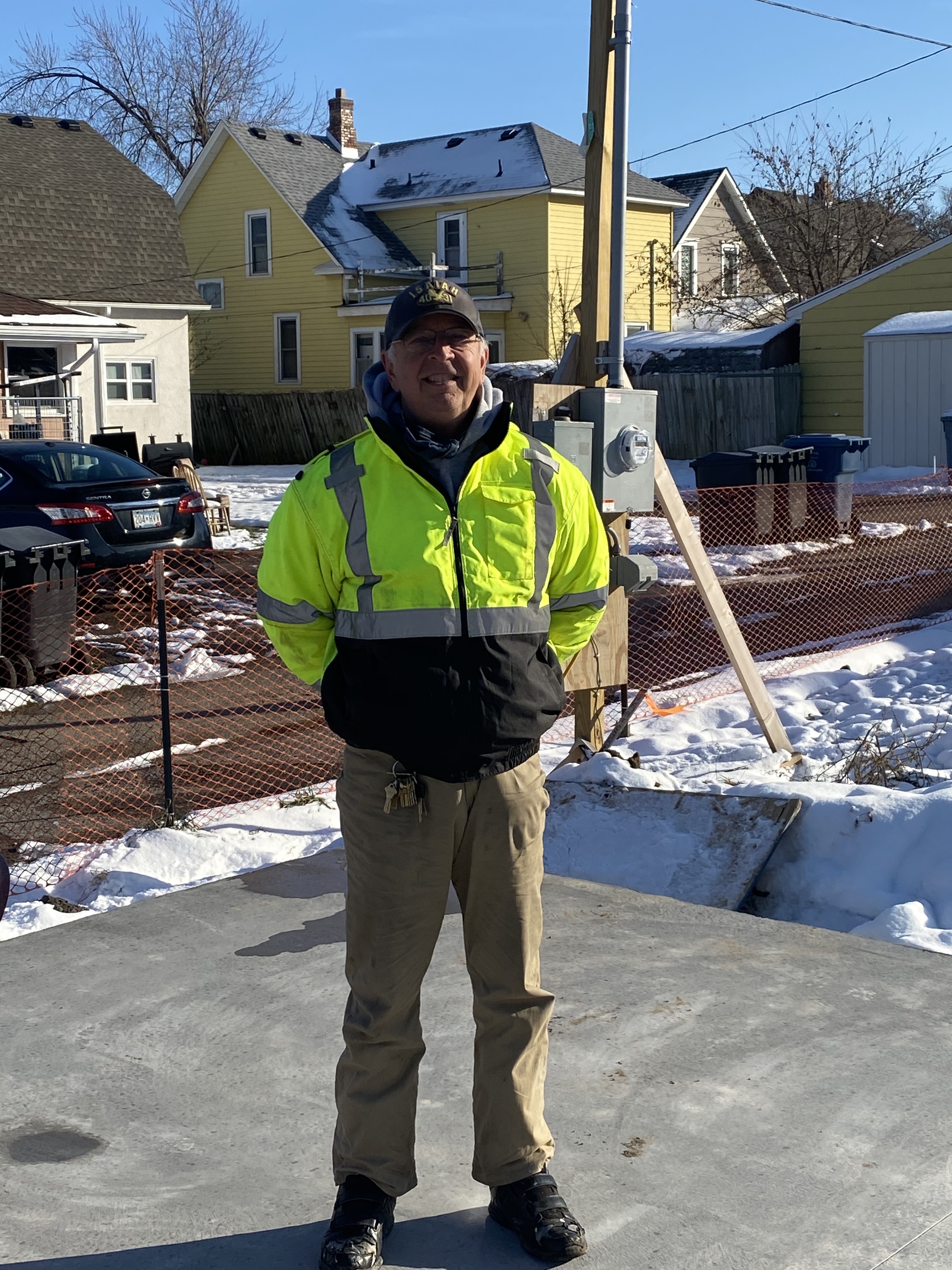 The Twin Cities chapter of Habitat for Humanity pushes through a pandemic and a social injustice movement to provide affordable housing for the next generation.

By Rachel Blood and Glasha Hovey

Tony Beckstrom woke up at 6 a.m. Nov. 13 and noticed the 13-degree reading on the thermometer. “What am I gonna do?” he wondered, thinking of the empty lot of land on which a house needed to be built. But there was no need to worry, his regular group of volunteers, retired men who have been with Habitat for Humanity for 20 years, always show up.

“[It] is just crazy to me that that’s how they would spend their retirement time,” said Construction Volunteer Facilitator and 2020 Bethel graduate Maddie Christy, who began her work for Habitat in September. “That’s been pretty impactful for me, I think, just seeing people give up their time like that and care so much about a mission.”

Beckstrom volunteered when the Twin Cities chapter of Habitat for Humanity was formed in 1985 until becoming staff in 1990. He said no other builder in town can provide affordable housing quite like Habitat, partially due to volunteer labor and donated materials from corporations. Those savings can be passed along to clients, which resonates with the organizations that donate materials and teams to Habitat.

Habitat is scaling back operations to prevent the spread of COVID-19. Beckstrom expects a slow, quiet winter without a lot of the usual volunteer groups. Saturdays, a popular volunteer day in the winter for Habitat, often draw in church or groups or people who normally spend nicer weekends up at a cabin or doing yard work.

Beckstrom’s boss suspended all volunteers aside from the group of retired men referred to as “regulars.” From a medical standpoint, their age makes them “high risk,” but Beckstrom points out that everyone over 60 has underlying health conditions.

“You don’t live this long without having something go wrong,” he said. But in his industry, it’s the younger generations that pose a higher risk due to their behavioral tendencies of going out, while older, retired generations stay home after work.

While Beckstrom and his wife, a Methods Hospital employee, believe that they had COVID-19 in February, the skeleton crew working on Habitat projects is scared. Beckstrom hopes a vaccine is around the corner that will allow operations to return to normal.

Habitat shut operations down in March for a few months before slowly reintroducing staff and volunteers to the build sites. The organization was returning to a relative normal in August and September, but is now regressing with the rise in cases.

When Beckstrom was a building inspector in the southwestern suburb of Edina, he heard there was an organization that was going to start an operation building houses with volunteers. “That’s the dumbest thing I’ve ever heard,” he thought. Then he decided to volunteer.

Thirty years, one month and 1653 houses later, Beckstrom likes to think everybody has heard of Habitat and its good reputation.

Over the course of a few hours, a ring of chairs serving as the volunteer dining room is replaced with a concrete slab as the basis of a soon-to-be home.

“Everybody comes together with a common cause trying to do the right thing, and I think that’s kept us alive and well for 35 years,” Beckstrom said.

Beckstrom primarily works on the north side of Minneapolis, in what he considers a rough neighborhood. He wonders sometimes whether Habitat and other initiatives are bailing water out of the boat faster than it’s coming in.

The recent civil unrest has been disheartening for him. One of Beckstrom’s projects on the south side was trashed during the peak of the riots. The home was close to being finished. He spent most of the summer alone or in pairs trying to repair the damage. Losing volunteers between the riots and the pandemic took away most of Habitat’s labor force.

Vandalism is nothing new to Habitat, and Beckstrom learned long ago not to take it personally. But this time was different in the midst of a social injustice movement and a pandemic.

Whenever Beckstrom drives through the north side neighborhoods of Minneapolis, he gets to see the houses his teams have built. Years ago, it didn’t seem like Habitat could have a big impact

on the affordable housing situation. The scope of the issue was and still is massive.

A large part of the volunteer force consists of retirees, who often lose their identity upon retiring. Without the need to go to work, retirees want to do something meaningful and have an impact on the next generation. No construction skills are needed to learn how to help.

Habitat tries to meet the needs of families in desperate need of a home, like families with five kids living in an overpriced one bedroom apartment. According to Christy, some Twin Cities apartments are so overpriced that families could be paying the same price in mortgage for more space, a yard, a garage and a driveway.

Families are often selected prior to the start of house construction. Parents help build the house as part of their down payment, allowing Habitat staff and volunteers to form relationships with clients. Beckstrom still joins a family with five kids for barbecues a few years after construction.

A man once approached Beckstrom in a Target, shook his hand and greeted him. The man proceeded to thank Beckstrom and Habitat, attributing his success in the University of Minnesota honors program to affordable housing. Beckstrom recognized him as the son of a couple whose house he worked on in 1991.

“It was always our theory that over time, it would benefit the next generation of children to have stable housing,” Beckstrom said, “but to see it come full circle was pretty special.”

0 comments on “From house to home”