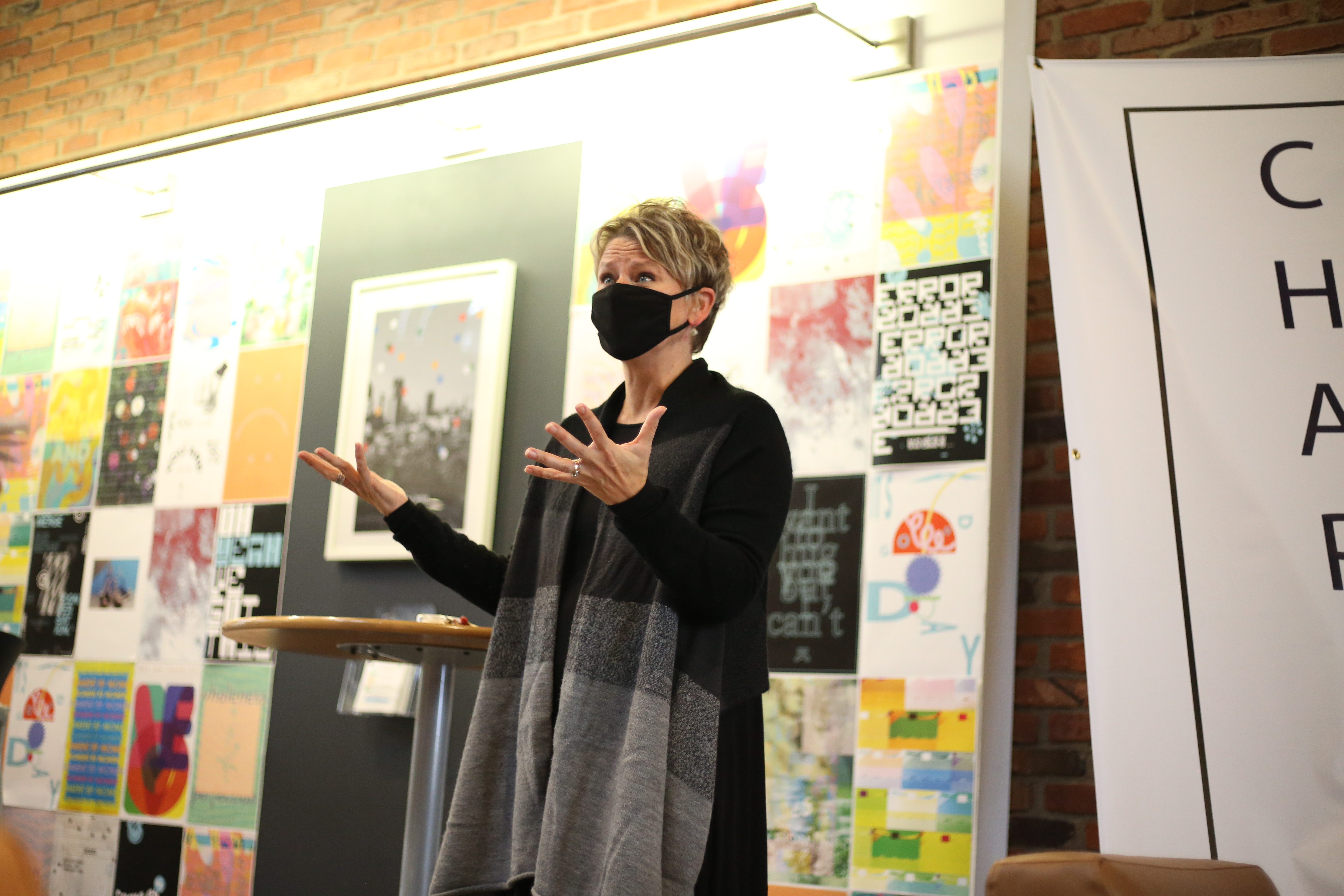 Students share how COVID-19 has affected their mental health, and how the stigma on a Christian campus can make it more difficult for them to seek help.

When a student walks into Brushaber Commons, past Royal Grounds, and to the Egg stairs, they can turn to the left and see a colorful spread of posters littering the wall that say, “I want to hug you, but I can’t,” or “Life is weird, but so are we.”

Introduction to Wellbeing professor Dr. Christine Osgood knew that when students came back on campus this fall, many posters would be COVID-related. She asked herself, “What can I do to shape the environment for good?”

Osgood reached out to design professor Jessica Henderson to see if any of her graphic design students could create posters that would be accurate to the abnormality of this school year. Osgood and Henderson gave the students free reign on their designs, wanting them to reflect some of the hardships students may be going through.

“I didn’t want it to be ‘Pollyanna’ or ‘suck it up,’ but to really help students think things through of what it’s like to go through school during a pandemic,” Osgood said.

Some students revealed that the spring and summer quarantine, wherever they were, was beneficial for their mental health, giving them time to reflect and take a break.

Zach Brunner, a junior business major who lived in North Village over the summer, said he took advantage of the separation from people.

“It gave me some time to say, ‘You know, maybe a break from all the people is a good thing,’ and it didn’t put as much social pressure or strain on me to be this person that maybe I’m not,” Brunner said.

While some students, like Brunner, were looking forward to the extended break, other students feared losing routines and connections.

Trinity Butroff, sophomore elementary education major, went home to her family first, but later nannied for her young cousins in Wisconsin over the summer. Butroff said she was very hopeful in the beginning of her quarantine, excited for school to start in the fall, but her optimism quickly soured when she realized things she had been looking forward to like a study abroad experience or fun Student Life activities wouldn’t be happening.

“It was a downward spiral that started in April or Mary,” Butroff said, “It became really hard to maintain a positive outlook, and in the midst of all of that I was doing homework, writing papers and studying for finals.”

A fall 2020 survey done by the Active Minds’ organization found that 88% of current college students are experiencing increased stress or anxiety due to  COVID-19, and one in four students reported their depression has significantly increased. While some students were looking forward to the extended break, many students found themselves feeling like a hamster stuck in a wheel during quarantine.

“I felt like I was repeating the same day over and over,” senior psychology major Elijah Rollerson said.

Rollerson noticed his mental health being affected by the lack of routine he once had while being on campus. Sitting in classes, working out at the Wellness Center and being surrounded by people who encouraged his faith were things he felt were missing during his time away from campus.

Not being able to sit down with a friend for coffee or visit a mentor in their office revealed itself to be a stressful circumstance – but once students were allowed back on campus, many noticed their mental health improved.

According to the Mental Health Foundation of the U.K., nine out of 10 people with a mental illness said that stigma and discrimination have negative effects on their lives. While there is a societal stigma, several students say this stigma isn’t necessarily on campus; it is more of an internalized version, a connotation that they cannot admit they need help.

“Especially because we are Bethel and we are a faith-based community, a lot of times people think that they can’t have these mental health issues,” Butroff said. “They say, ‘I don’t have these issues because I have God,’ but sometimes that’s not the whole story.”

For many, getting over that hill of internalized stigma means taking the step of reaching out, but that’s not always an easy thing to do – especially for those with anxiety about admitting their weaknesses or struggles.

“There’s a lot of fear of being seen, of being the person that needs help,” Rollerson said of the anxiety he once felt about seeking counseling.

“I’ve gone to the counseling offices, and there’s no problem with just walking in and wanting to talk to people…there’s no shame anymore in talking about what’s going on,” Brunner said.

To contact the counseling service or schedule an appointment, a student can email counseling-services@bethel.edu or call their office phone number, 651-635-8540, between the weekday hours of 8 a.m. and 5 p.m. All appointments are currently via telehealth.

When contacting the counseling office, Hill suggests that students include as much information possible about their availability, as the office is busy this season. While the counseling services and staff of 11 counselors do not provide diagnostic services, they do offer confidential specialized counseling.

“College is a place where you are still growing and finding your identity…it’s okay to have struggles,” Rollerson said. “We don’t need to feel less than just because we are struggling in one way or another.”

0 comments on “Isolation: A different kind of health crisis”