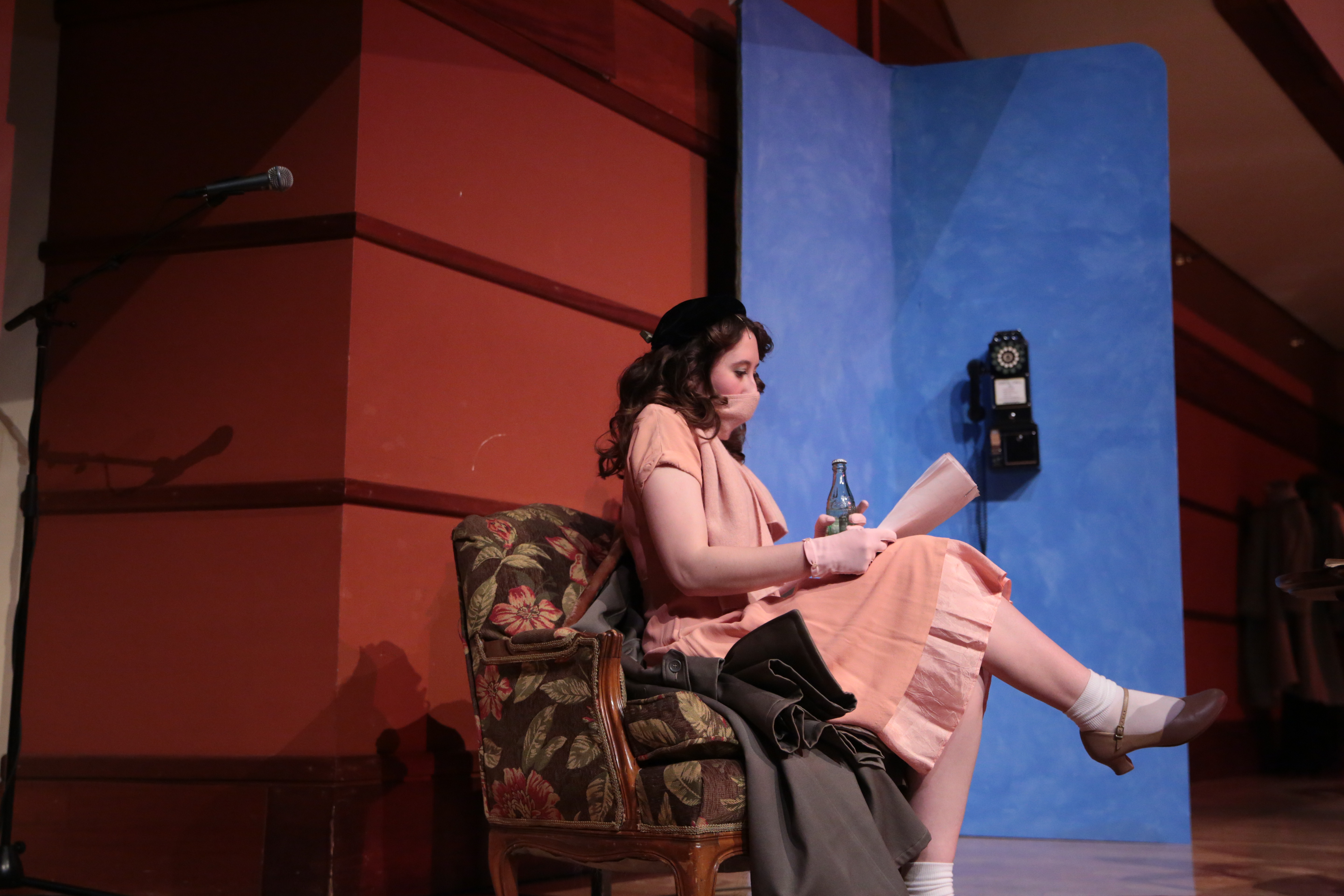 A year after the Theatre Department’s last live production, the show went on with the socially-distanced 1940s Radio Hour musical.

Director Meg Zauner cued the start of dress rehearsal for the department’s first live show in a year. The actors wore scarves, puffy sleeves and suits and ties. Feb. 4 was their last night of performing for an empty house.

After rehearsing three hours every weeknight during interim and some afternoons, the play premiered at 7:30 Feb. 5. The three performances brought in about 530 people to Benson Great Hall during the weekend.

Junior Theresa Drexler crossed Benson’s stage in a pink dress-scarf combo with her dark hair curled loosely. She carried a script and a coke bottle. Behind her, an “On Air” sign glowed in red, signifying “Radio Hour” was live just like the theatre department.

Music filled the hall once again with a band sitting on risers behind the actors and multiple musical numbers sung by the performers. Even with mask and scarf-covered faces, the performers stayed in character.

The cast couldn’t be happier to be acting in front of an audience since the last performance was the “Pride and Prejudice” musical one year ago.

“This may sound morbid, but it’s like the gap in my soul is filled,” Theresa Drexler said.

Drexler, who graduates in spring of 2022, aspires to become an actor and director working with professional theatre companies such as Theatre Latte Da and The Chanhassen Dinner Theatre.

She collaborated with Student Body Vice President David Jankowski on a musical number called “How About You?” where the duo tried out their dance moves. She sings another number in pig Latin and tries out her east coast accent for a skit. Drexler isn’t playing around.

She said one struggle was hearing the other actors because of the masks and distance, but despite the challenges, she was thrilled with the result.

“This show is a testament to the quality of education of our department,” Drexler said.

She began her theatre career in sixth grade as Chip in the production of “Beauty and the Beast, Jr.” and has been in more than 20 shows since then.

Not only did Bethel President Ross Allen come to the show, Drexler’s parents attended the Saturday night performance. Her parents, with only slight bias, deemed it an “entirely wonderful experience.” Rebecca Drexler remembers taking her daughter to high school plays and musicals where she was inspired to start theatre.

“Radio Hour” consisted of love ballads from the 40s that tugged at heartstrings and sultry numbers for comic relief. The time was set when soldiers went to fight in World War II, leaving behind friends and family who longed for the day they’d be reunited. Zauner thought the play was timely because of what the country is experiencing now as we have all been socially distanced for the past year.

Director Zauner said music of the 40s included “tight harmonies and usually four to five people grouped around the mic.” This made the performance all the more challenging. Her and stage manager Amanda Ripley had to enforce social distancing throughout rehearsals so the show could go on.

“They are my friends so I don’t want to yell at them for being too close,” Ripley said. “But I also had to think about what was best for the whole show.”  She is one of three theatre majors  taking  “Producing and Performing the Musical.” The stage is where Ripley feels closest to God and where she aspires to be after graduating this May.

“It is truly by the grace of God that we were able to do this production without anyone getting sick or having to be shut down.” Ripley said.

The future of theatre

Actors are looking forward to more live productions coming this spring with “Antigone” and “How to Achieve in Business.” These shows were canceled one year ago due to the campus shutdown.

The theatre department will collaborate with the music department from now on and the J-term musical class will continue as the theatre minor keeps going. Dr. Steven Thompson played trumpet for the “Radio Hour” and led the musical directing. The 3-credit class also included marketing, set building and painting.

While staying six-feet apart and wearing scarves, the theatre group prayed before each rehearsal thanking God that the show was happening.

The show, which was presented by arrangement with Concord Theatricals, also received recognition from Channel 5 news and an article was written by the Star Tribune about theatre being creative during this pandemic.

“We are one of very few institutions that have been able to safely perform live theatre during this year,” Drexler said. “I think that speaks volumes to our department’s commitment to giving its student’s the same quality of education we would get in a normal year.”

0 comments on “Live and on the air”