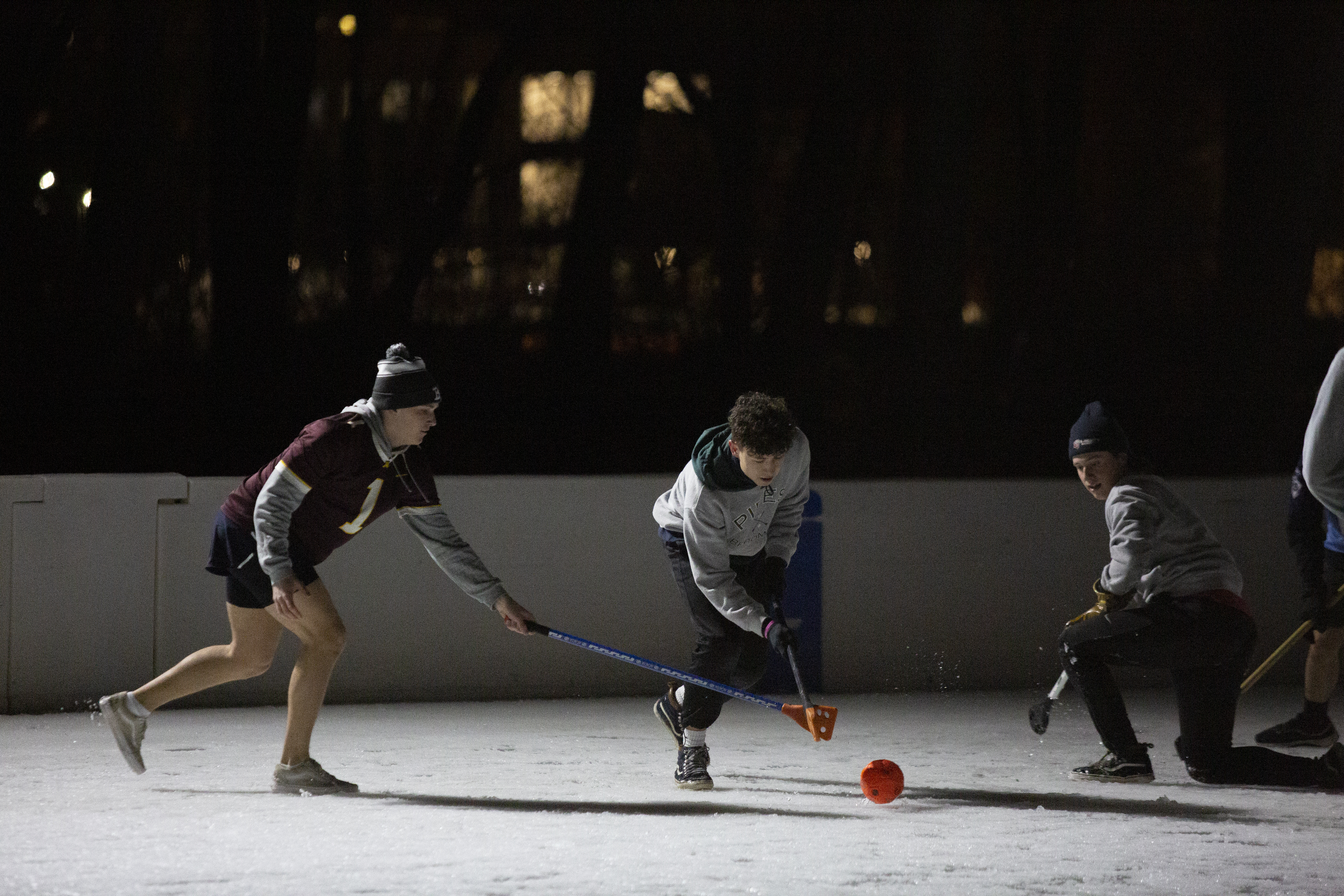 Bethel students and alumni reflect on how the annual broomball season fosters competition, excitement and community.

Students creep out of their dorms after sundown, bundled up in layers upon layers of warm clothing. They grab their battered, dented sticks and prepare to face the bitter cold. Numb fingers, toes and faces are expected as subzero temperatures seem to have no effect on the size of the crowds at the ice rink, as it’s been for decades. At Bethel University, January is the time for broomball.

Senior Ben Richburg has played every January since he arrived at Bethel as a freshman and looks forward to the season every year, which runs from January through the end of February.

“The months can get long and cold, but playing broomball with so many teams is such a blast and creates something for us all to look forward to and get excited about,” Richburg said.

Teams range from playing just for fun to holding weekly practices and designing plays. No matter the end of the spectrum on which a team falls, Richburg says players can expect to have fun.

“[Broomball] creates unlikely friendships and it is hard to not have a great time while playing,” Richburg said.

Students in the BUILD program, Bethel’s two-year academic experience for students with intellectual disabilities, participated in this year’s season, facing off against teams from across campus. For first-year BUILD student Ryan Hunt, the sport was something new.

“My favorite part was playing the game and having social interactions with people,” Hunt said. “I didn’t care if we won or lost. The only thing I cared about was to have fun and meet people.”

Hunt played on a team with both BUILD students and four-year undergraduates. Although the team ended the season with a losing record, Hunt said he wants to play again next year.

The Bethel broomball tradition extends beyond the years students spend on campus. Alumni remember their time playing broomball and the friendships they formed, some of which have become lifelong.

1997 Bethel graduate Lisa Horsager played in the Bethel tournament three of her four years as a student, opting out one year to study abroad. Horsager’s team was led by Jon Wicklund, also a 1997 alumnus, and they both remember the sport consuming the month of January.

“The whole point of interim was to play broomball,” said Horsager. “It’s a terribly fun sport and something fun to do in the middle of winter.”

Called “The Great 8,” Horsager’s team made sweatshirts to wear around campus, and the team even won the championship one year. Horsager said, outside the rink, teammates would often get together to watch movies and chat in a residence hall.

“Our team had epic battles with [Wicklund’s] team,” said Bryant. “Although we were very competitive, it was also very inclusive.”

Sometimes, the lengths to which teams would go to to play were extreme.

Johnson remembers a day when the outside temperature was so cold the Governor of Minnesota closed public schools and Bethel put a halt on classes for several days, but come nightfall, students were on the ice.

“I remember taking the battery out of my car and storing it in my townhouse in [Arden Village] East just so I could make sure [the car] was ready to drive to broomball,” Johnson said.

More than two decades later, the alumni recall broomball memories as some of their most treasured from Bethel. This winter sport of which most people outside Minnesota have never heard continues to have an effect on alumni today.

“Broomball is a time honored and cherished tradition at Bethel. Some people might not realize that the little things like intramural sports and broomball actually make a significant difference in the lives of so many students,” Johnson said. “No matter the athletic background or familiarity with sports, broomball is a connection point that brings people together, and those relationships have proven to be lifelong in so many cases.”

0 comments on “Decades on the ice”