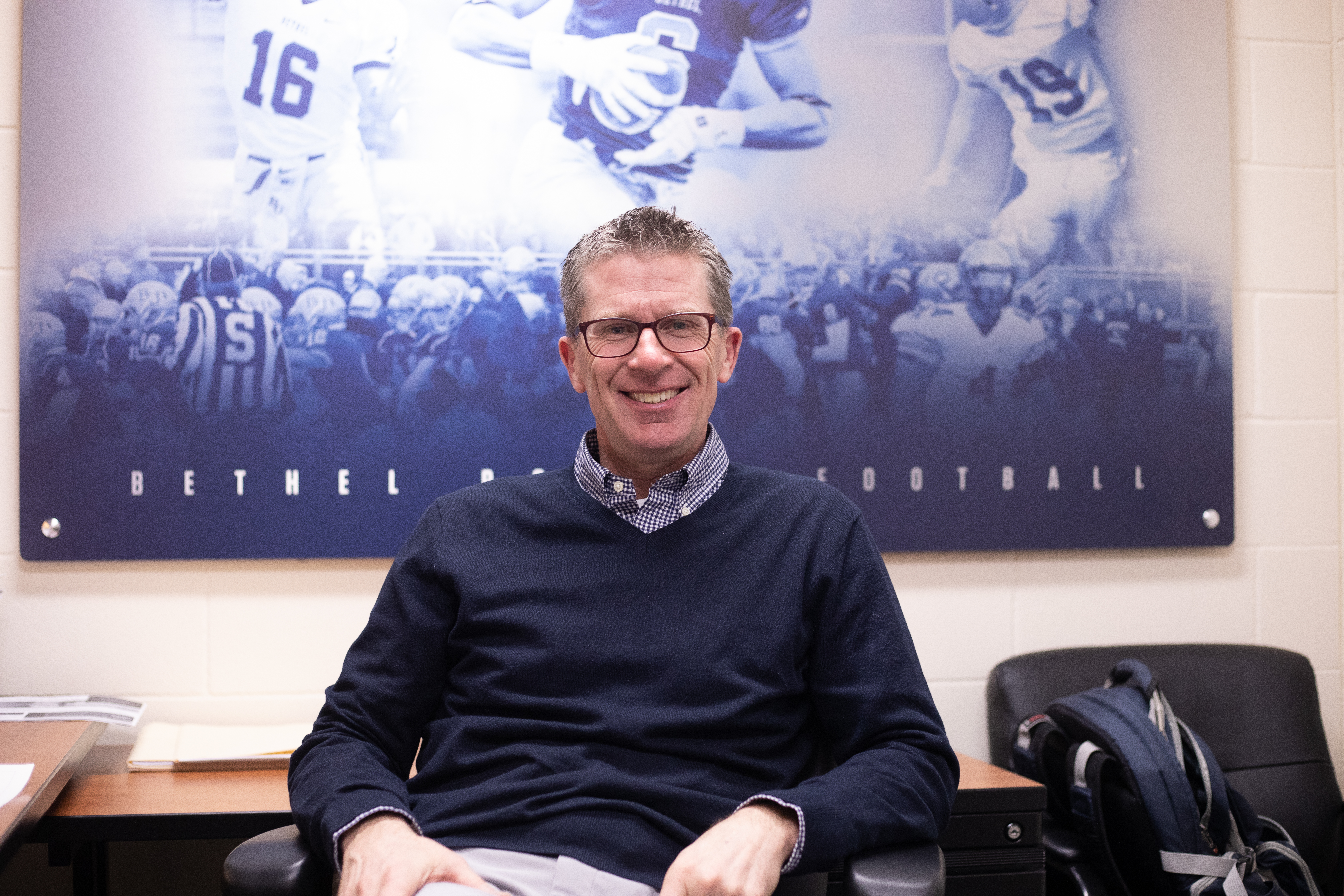 Greg Peterson discusses how he is adjusting to his new job, his Bethel experience, and plans for the future.

Greg Peterson sat at his desk in his office RC210. Down the hallway from him are the offices of soccer and football coaches, as well as various other members of the athletics department. Across from him sat a freshman football player, sharing about his student-athlete experience so far at Bethel. As Peterson listened, he realized just how much Bethel had changed since his time as a student-athlete almost 30 years ago. To be fair, he had changed a lot too. Most recently, in his official title at Bethel, but also in his personal development spanning his 29 years at Bethel, both as a student and an employee.

“Greg has worked full time at Bethel for the last 23 years and brings an in-depth understanding of Bethel athletics, a passion for Christ, and a desire to support and serve student athletes to his new role,” Addleman said.

Peterson is taking over the job from Bob Bjorklund, who has held the position since 2004. Bjorklund will officially retire in May, and during the overlap period from February 15 to June 1, Bjorklund will help Peterson transition into the role.

“I am thrilled that Greg Peterson has been chosen as the next Director of Athletics at BU,” Bjorklund said. “I know firsthand from working alongside Petie for 24 years that he is a man of exceptional character and competence.”

Peterson was a student-athlete at Bethel from 1988 to 1992. During that time, he was a member of the Royals’ football offense and basketball team. Peterson spoke about the positive effect Bethel had on him, and how he sees this same effect continue to transform lives today.

“Being a student-athlete here was absolutely life transformational for me,” Peterson said. “The influence of coaches on my life, my relationships with peers, that was huge.”

In his role as assistant football coach, Peterson was an offensive coordinator and quarterbacks coach. He produced the MIAC’s top passing offense in 2013, and was Top 4 in the MIAC in total offense in 13 of 17 years as offensive coordinator, including first in 2013. Peterson detailed how he would often spend two to three hours a day at his desk, planning out practice and scripting plays for practice.

“Sometimes it seemed like that’s the only thing I did,” Peterson jokes.

Peterson’s learned to value the unique perspective each student brings to the collective Bethel experience, especially in regards to the football team where he has had the most experience. He realized that of the 103 players on the football roster, there were more players from Florida, Texas, Colorado, and Washington than were from Wisconsin. Peterson notes how much Bethel has extended its reach, in terms of its student body, since his days as a student-athlete and how striking this is for him as a coach and member of the athletics department.

“Those 103 student-athletes have 103 different life experiences that brought them to this point at Bethel,” Peterson said. “That was really eye-opening to me.”

He also described how one of his biggest tasks as a football coach was recruiting incoming players, a solitary task of connecting with recruits via texting, phone calls and campus visits. He discussed how one of the biggest changes in his new position is how he connects with other coaches in the athletic department. He has started to meet with coaches from an array of different sports, and he described how different this is from his work for the football team, because of how intentional he now tries to be in connecting with other coaches.

Peterson also noted how the recruitment process has changed as a result of COVID-19.  He explains how seeing less students on campus during the pandemic, specifically in the time period from Thanksgiving to Christmas, influenced him personally.

“I was pretty discouraged then,” Peterson said. “It became really evident to me, seeing how I was affected by it and knowing how our students are affected by it.”

Peterson recounted when Bethel President Ross Allen spoke to the athletic department over the summer about how to move forward with sports for the upcoming school year. Peterson remembers how President Allen stressed the importance of overall wellness for student-athletes.

“Our student-athletes are dealing with a lot of stuff, and we need to think about how the decisions we’re making are going to affect their mental health,” Peterson said.

As Peterson reflects on his time as an assistant coach coming to a close, he wrestles with  the emotions that come with no longer being able to help coach the football team. He detailed how interactions with coaches and players for the team have been meaningful to him.

“It has been profoundly sad, and it’s been emotional for me in a lot of ways,” Peterson said. “I don’t like the idea of that changing.”

Next fall, he hopefully plans to schedule his days so that from 3 p.m. until the end of the work day he is free to go watch Royals football, soccer or volleyball practices.

“It is impactful and it is life-giving for me to be out there,” Peterson said. “I won’t sugarcoat it and say that it’s been easy. It’s been hard, but also I feel this incredible peace in the midst of it.”