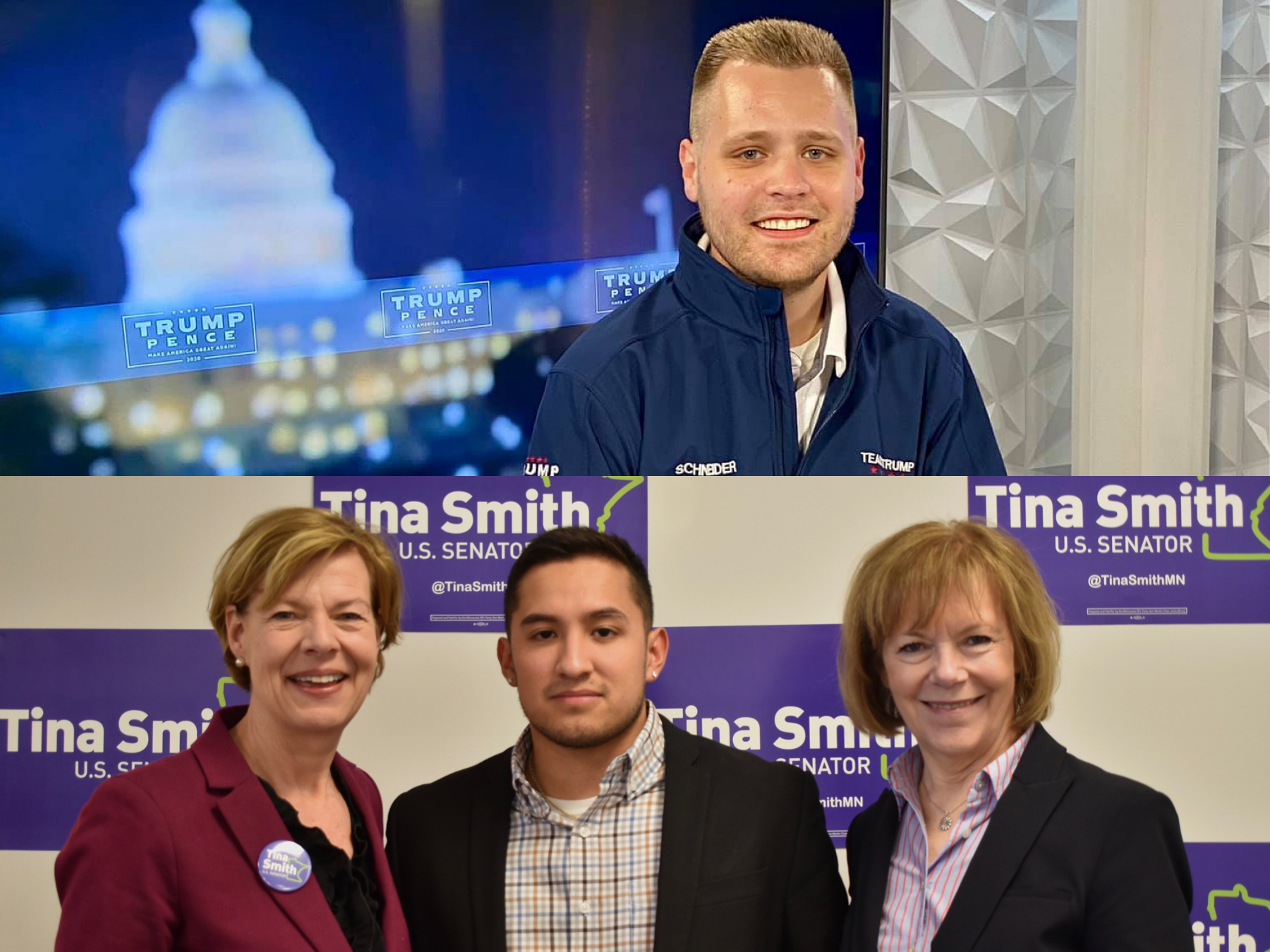 Bethel University alum Jake Schneider and senior Matthew Ramirez reflect on how Bethel influenced the way they see the world and work in a political environment.

Cameras. Emails. Video marketing and internal communications. Bethel alum Jake Schneider and senior Matthew Ramirez are no strangers to the pressure of quick turnarounds in a high-stakes political setting and have used all of these skills and more to their advantage in the political field, working on opposite ends of the political spectrum but coming from a place of shared compassion and faith.

Writing speeches. Taking photos. Social media. Anything and everything communications related, Schneider has got it covered. His normal nine to five workday is often encroached on to accommodate committee meetings and the passing of congressional legislation. It’s normal for him to see Speaker of the House Nancy Pelosi walking through the halls of D.C. government buildings alongside him.

“Government matters for real people,” Schneider said, “and it’s cool to see that in action.”

Schneider has always had a passion for politics. Growing up in rural Minnesota with limited political opportunities, he tried to get involved as much as possible through participating in parades, handing out flyers and educating himself on the political state of his country.

At Bethel University, Schneider double majored in political science and communications. He then joined Bethel Student Government and eventually led the College Republicans. Studying at Bethel also allowed Schneider to hear different perspectives from the conservative background he grew up in. In his political science classes, students would debate institutional and ideological issues.

“It was always respectful. It was always challenging,” Schneider said. “Being able to think critically and analyze issues from a different world view is a skill that I learned at Bethel.”

As he matured, Schneider tended to lean more conservative, and for that reason he has sought out jobs working for Republican politicians since graduating from Bethel, including positions in legislation, communications and response teams.

One way to educate the general population on political issues is through social media, but Schneider thinks it is a horrible place for political discourse.

According to Schneider, Twitter battles in limited characters can explain what someone believes, but not why they believe it. Full experiences cannot be shared in an environment without body language and human interaction.

“It’s so important to understand the humanity behind the person that’s saying something to you,” Schneider said. “And you don’t get that on social media at all.”

Schneider’s faith has allowed him to understand issues and their place in his life while allowing him to take his own stance on common areas of political discourse.

“Faith is really important in politics because it gives you a moral foundation,” Schneider said, “but it also can’t be the case where your politics become your God.”

Ramirez, who also has minors in  history and media production, connected with a Smith campaign TV producer at the Twin Cities Film Festival. Ramirez first worked on a digital marketing team, creating video content for the campaign. On his first day on the job, Ramirez interviewed Smith herself.

The campaign was split into spring, summer and fall terms for which employees could be rotated or rehired. Following the summer 2020 term, during which Ramirez was forced to work from home due to the pandemic, he was recruited to the Latinx-Hispanic political outreach campaign team, where he set up interviews and calls between his crew and local businesses and was extended once again to the next term.

Because his father was in the Navy and couldn’t openly express his political opinions, Ramirez didn’t have many political influences to shape his views growing up.

“In all of the advising I do with students, I encourage them to take advantage of the general education requirements as an opportunity to take classes that they might enjoy,” said Kooistra. “One of my former colleagues, Kevin Cragg, once told me that it was important to remember that sometimes God calls us to our joy –meaning that finding joy in something can be a way of ascertaining that we could be called to that something.”

Ramirez, who will graduate in May, aims to pursue a career in digital marketing, political science or business. He’d like to go back to his home in Washington state eventually, but will explore his options in Minnesota as well.

Ramirez says that his Bethel education, incorporating faith and the liberal arts, has helped him learn about and understand both ends of the political spectrum, whether that be social issues or policies. It has also helped him to see the bigger picture and gain a deep understanding of the workings of the world.

On the Smith campaign’s digital marketing team, Ramirez single-handedly worked on 50 to 60 videos that were published to Tina Smith’s Twitter and Instagram pages over the course of three to four months. Social media was a large part of the campaign process.

According to Ramirez, social media is ultimately a positive tool. Political discourse can get out of hand, but social media presents a platform for idea sharing from multiple perspectives.

“It’s good to see what the other side thinks, to better understand them,” said Ramirez, “because if you only believe in one side, you’ll never really, truly understand it.”

Working on a Democratic campaign allowed Ramirez to interact with people from different religious backgrounds. He had to learn what it meant to him to use his Catholic faith in the decisions he made and policies he implemented while considering the effect it had on his colleagues.

“To some, faith is their political beliefs,” Ramirez said, “but I think that my relationship with my faith is really personal.”

0 comments on “Shaping political views with a liberal arts education”