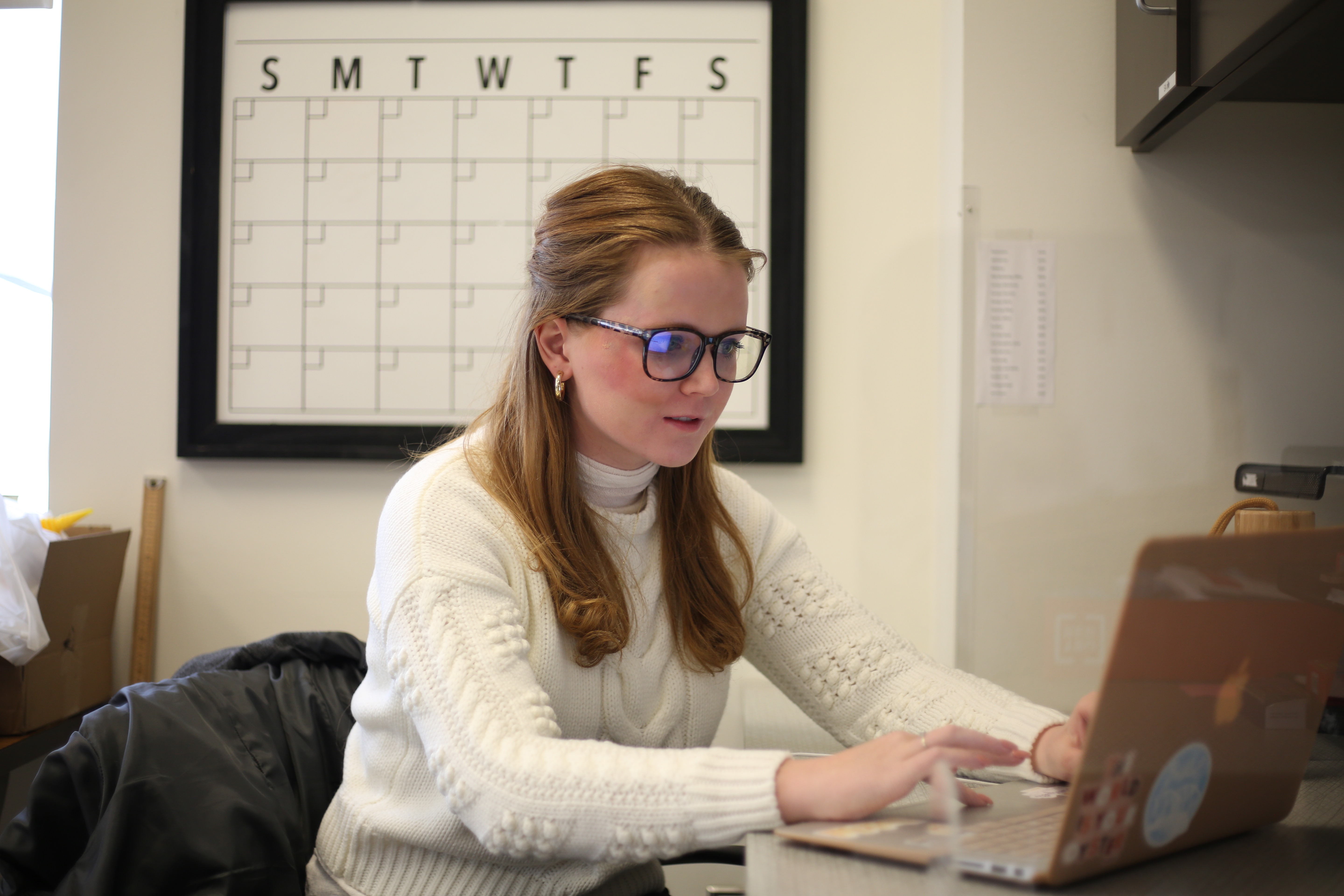 Kjeirstin Carlson shut her eyes. Under her bed covers in Bodien Hall, she tried to fall asleep, exhausted after another busy day as a Bethel freshman.

But her heart wouldn’t let her.

As she lay there, she felt her heart pulse with a powerful, irregular beat, like her heart was working harder than it should. She waited for it to stop, and it refused. She grabbed her phone and dialed home, despite it being close to 11 p.m. She noticed panic in her mother’s voice. This was serious.

After several hospital trips, she learned the heart palpitations were a sign of heart arrhythmias, or abnormal beating in the heart. Arrhythmias can range from being slightly bothersome to life threatening. One more serious type of arrhythmia is called atrial fibrillation, and occurs when the electrical activity in the heart is unstable instead of regular, so blood is not as easily transported through the body and less likely to reach the brain.

But the doctors said it couldn’t be this. AFib, as the heart condition is commonly called, is only seen in elderly patients, not 18year-olds who make it to the gym almost every day. It had to be a minor arrhythmia, they said. Just an abnormal heart rhythm, but not life-threatening as long as the heart is still pumping blood forcefully. Nothing to be too afraid of.

Still, Carlson could feel that something more serious was going on. The palpitations became more frequent, occurring multiple times a day, and exhausted her. She found herself consistently more tired and having to muster up enough internal motivation just to make it through the day. The drugs and exercises doctors prescribed only made her more sick by giving her headaches, double vision, and severe nausea. Since her heart was working extra hard to pump blood throughout her body, it required extra rest, which isn’t compatible with being a college student who strives for A’s, participates in multiple clubs, and values having time with friends. She knew something had to change if she didn’t want to give up her lifestyle.

After more hospital visits where more doctors told her more of the same information, she turned to her grandfather’s cardiologist at the Minneapolis Heart Institute located at Abbott Northwestern Hospital. In the waiting room, she was the only patient under 60.

It was here that she was officially diagnosed with atrial fibrillation.

Walking back to the examination room, Carlson thought she was again about to hear more of the same information. But this cardiologist specialized in AFib, and would be able to spot the disease where other doctors wouldn’t on her echocardiogram, a test done to see heart rhythms.

After one look at the echocardiogram, the doctor knew. She had AFib.

Her mother, who was in the room with her, burst into tears. Saying she needed to take a walk, she left the room, leaving Carlson alone with the doctor who had just officially diagnosed her. He said they could wait until she returned to talk about her options. Carlson filled those five long minutes by reading a packet the doctor handed her that explained what AFib was.

When her mother returned, they began to talk about options. The doctor told them the illness was incurable. Manageable, yes, with medication and good sleep and food, but stubborn. Sometimes drugs work to sustain a normal rhythm, but sometimes it doesn’t and surgery is required. The next few months would be a process of trying different techniques to calm her heart down.

Having AFib doesn’t just mean having a weak heart, it also greatly increases the risk of stroke. According to the Centers for Disease Control and Prevention, approximately nine percent of adults over 65 are eventually diagnosed with the condition, with only two percent of adults under 65 hearing the same news. For people under 20, that percentage is even lower.

Most people who live with AFib are diagnosed not when they are 18, but when they have 18 years left to live.

“It was very emotional,” Carlson said. “A real shock to the system.”

At the start of her journey with AFib, she was forced to slow down for a time in order to focus on her health. Not only did she have less time to commit to the activities and people she loved, but more time at the hospital meant more time to ruminate on what was happening to her.

Another difficulty Carlson found was learning how to explain her situation to others. It was especially hard with the people she knew best at school, like her friends and freshman floor. Sometimes she didn’t have the right words to say it or felt the need to act like she was okay, even though she wasn’t. Struggling with an “invisible illness,” as she calls it, was very tough mentally for Carlson at the beginning of this journey, simply because she couldn’t find the words to tell people what was going on. Though this social aspect was difficult for Carlson, she views it now with a different mindset.

“Now I’m able to look back on it [and see] it was an example [that] sometimes you need to ask for help and clue people in,” Carlson said.

As episodes continued to worsen, doctors suggested that Carlson receive surgery to help ease the symptoms and reduce her risk of stroke. On May 1st, 2019, surgeons at Abbott performed a dangerous and invasive procedure called an ablation that charred some of her heart so as to stop extra electrical activity. Doctors entered her body with a catheter through the veins of her leg and threaded it all the way up to her heart. They sent waves of extreme heat through the tube to burn pieces of her heart so that they are no longer functional in sending and receiving electrical signals that cause a heart beat. The purpose of such a procedure is to stop extra electrical activity and unify the beats into a more regular pattern.

Carlson says her symptoms reduced 80 to 90 percent after the surgery. Palpitations were less common and less powerful, allowing her life to be less interrupted by the symptoms that came with them.

Even now, as a senior planning to graduate this fall, she says her symptoms are mostly manageable. She can still experience palpitations some days, but can also go weeks without them. She says it can vary, but it’s much better than before her surgery when she experienced them multiple times a day. Time has been good in allowing her to distinguish what triggers these episodes, and she does her best to mostly avoid them now. Things like sudden temperature shifts, eating fatty foods and not getting enough sleep tend to be common culprits.

“I feel like I can kind of tie it to my lifestyle,” said Carlson. “Whereas freshman year it was just kinda out of control.”

Carlson’s sister, Britta, a Bethel sophomore, says witnessing this whole situation made her appreciate the strength and determination of her sister. Britta tells of how the day after heart surgery, Kjeirstin was studying for a French test, and told Britta she planned to return to campus just three days later to take it.

“She was so determined to not let this take too much of her life,” Britta Carlson said. “If it would’ve been me, I would have taken lots of time off.”

In the year and a half since the surgery, Carlson has learned to work with her body, not against it. She has accepted AFib as a part of her and knows how to manage it by taking a low-dose aspirin every day as a precaution and watching for triggers in her environment. This way, she can still attend classes and stay involved with her clubs on campus. She can see friends and family without having to worry if her heart will randomly sabotage her. She can even move to New York City to do an internship this summer and graduate in the fall with a business marketing degree.

“If I didn’t have this way of my body telling me [to stop]… I wouldn’t focus so much on having a balance,” Carlson said.

Carlson serves as the president of Bethel’s chapter of DECA, a club that competes nationally in solving business problems, and she is the BSG Director of Banquets and Dances. She also is involved in Bethel Biz, a mentorship program for business majors.

Anyone over 65 who lives with AFib would look at Carlson’s life and warn her to slow down. Doctors have told her. Her parents have implored her, but Carlson has dreams of making it big in the business world, and wants to see that come to fruition as soon as possible.

“They told me to hit pause on college, but I’m stubborn, so I didn’t,” Carlson said. “At the end of the day, something is making me feel normal and involved… which is good from a mental perspective.”

Carlson also thanks her heart condition for strengthening her faith and offering a fresh perspective. Before the condition, Carlson said her life was fairly comfortable and it was easy for her to think she could do everything on her own. She explains how AFib brought that to a screeching halt and reminded her to rely on God for everything. She found herself desperately praying during those episodes of intense palpitations for immediate physical relief and says this practice of prayer and reliance on God has continued even now, two years after the first time her heart wouldn’t let her fall asleep.

“[Life] can be harder [sometimes],” Carlson said. “[But this is] the most crucial part of my faith story and my testimony.”

0 comments on “Finding a new rhythm”