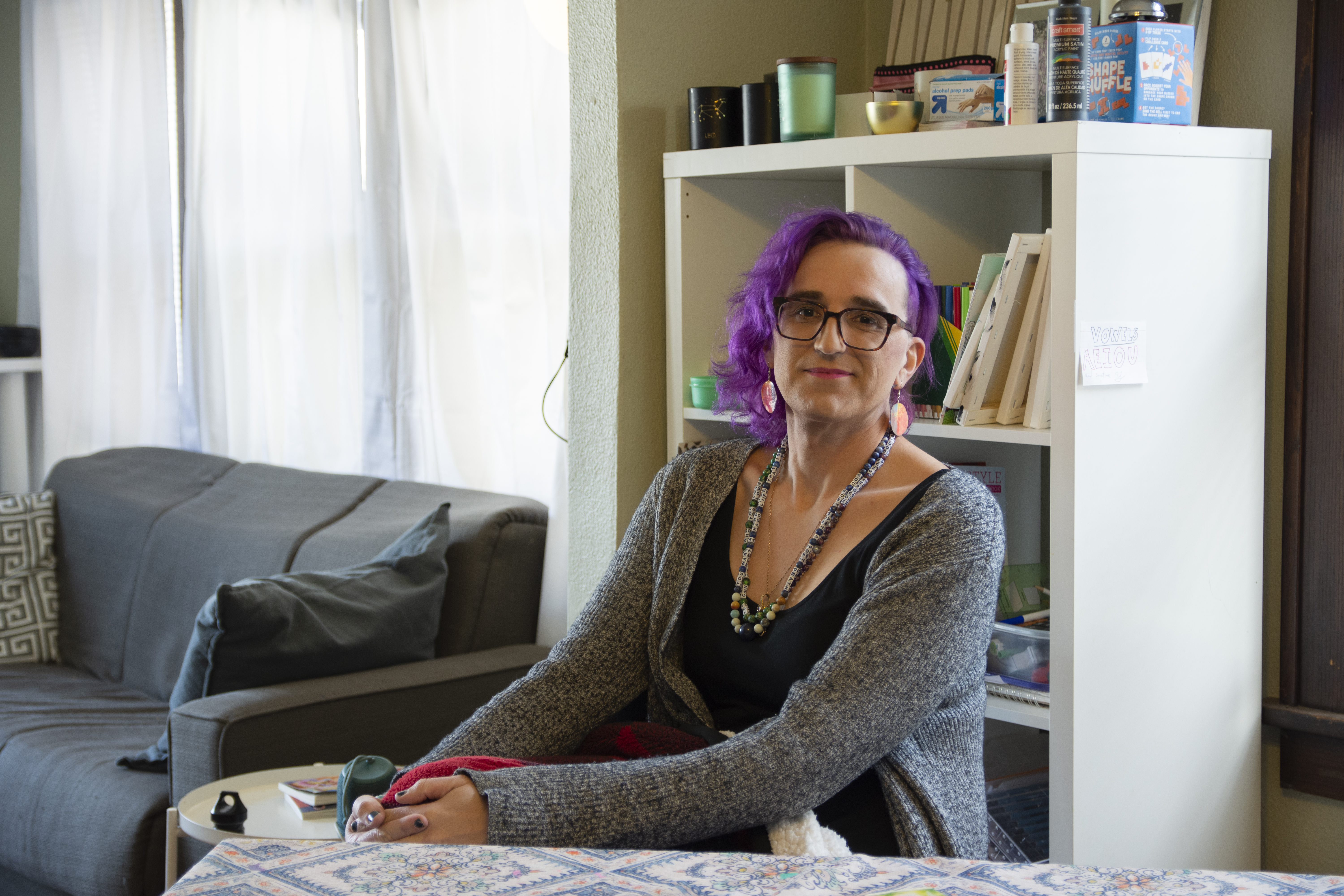 Bethel alumna Leigh Finke examines how religion and culture intersect with the lives of queer people and inspires others to work toward inclusivity, such as the creation of Bethel’s LGBTQ+ student group, Prism.

By Emma Eidsvoog and Makenzi Johnson

At 15 years old, Leigh Finke asked herself a question that took almost 20 years to unravel: Am I gay?

Instead of finding an answer she became an Evangelical Christian. Finke didn’t grow up in a Christian environment but decided it would be easier than coming out. She decided going to church would keep her from having to address what she felt but couldn’t quite explain.

Twenty years later she chose a life that felt right to her.

In her late 30s, she first came out as bisexual but realized it wasn’t quite right. Three years ago, Finke started transitioning to a woman.

“Those fears were the same ones. I was just older and more capable of answering those questions emotionally and rationally,” Finke said.

She and her ex-wife are on good terms, raising their two kids in separate St. Paul homes just a few blocks away from each other with the daycare in between. Finke’s parents didn’t react well.

Now, using her platform as a queer woman and a former Christian, Finke produces film and stories centered around the queer experience.

“I heard this all the time, ‘I just don’t get this,’” Finke said. “You don’t have to get it. I don’t expect you to understand it and get it. That’s just a reason to not do the work.”

After leaving Christianity, which she considered her closet, Finke now views the church as simply her workplace. She teaches leaders how to support LGBTQ youth with her book Welcoming and Affirming: A Guide to Supporting and Working with LGBTQ Christian Youth. Throughout the pages, Finke highlighted statistics from organizations like The Trevor Project, which studies the effects of societal pressure on LGBTQ youth.

“My life’s work is to protect young people from killing themselves,” she said.

Finke started her writing career as an English literature and writing major at Bethel University, graduating in 2003 before attending DePaul University for her master’s degree in Shakespeare. While at Bethel, she wrote for The Clarion, protested the Iraq war and realized she was more progressive than others at the university.

In August 2020, Finke published two books through 1517 Media, where Finke works as a Senior Media Producer. She also started her own video production company called Totally Gay Productions, which works with organizations, companies, churches and non-profits in the Midwest.

Finke’s second book, Queerfully and Wonderfully Made: A Guide for LGBTQ Christian Teens, was also published last August. She worked with contributors which included a counselor, school teacher, pastor and others knowledgeable on the issues teens face. She wrote it with the writing voice of a “sassy, older sister” and thought about what she had needed to hear at 15 years old.

“The purpose of the book was twofold,” Finke said. “One was to get people confident and back into security and emotionally ready to come out if they felt like they could come out. Part two of the book is how do you even be a queer. What does that mean? What does life look like?”

She wants her books to be at public libraries where youth can learn about themselves if they can’t openly talk or ask questions at home.

Finke avoided discussion on theology in her books. She believes there’s no discussion to be had.

“You either affirm or not affirm,” she said. “You either change that it’s sin or not.”

In 2013, Finke started a Facebook group to connect LGBTQ Bethel alumni. John Mark Shields, a 2020 Bethel graduate who now works as a facilities management custodian at Bethel, joined the Facebook group in February 2020.

Shields, whose pronouns are they/them, said they began working at Bethel University to heal from past wounds. Shields says they experienced backlash from students after hanging a pride flag from their window in Nelson Hall.

“I felt really alone in my first semester and I needed to connect with other people like me,” Shields said. “It was like my own SOS in the window.”

During their freshman year, Shields and a few other students decided that a space needed to be created for LGBTQ students to feel safe. In 2016, those students began to form Prism, Bethel’s LGBTQ discipleship group.

“It felt like I could finally breathe on this campus as a student. As soon as everyone walked in and shut the door, it felt like you could breathe.”

Shields remembers the day the group was announced in Chapel. As they sat in Benson Great Hall, tears fell down their face. Posters appeared around the stairwells and a group of about 30 students began to meet with former Campus Pastor Jason Steffenhagen, who served as the group’s first adviser.

“I just sat bawling because it meant they weren’t ashamed anymore,” Shields said. “It felt like Bethel didn’t pretend we were no longer on this campus.”

The club was required to have an adviser and wasn’t allowed to make theological statements, but Shields hopes the club lasts in order for LGBTQ students to have a safe space in the Bethel community.

“It felt like I could finally breathe on this campus as a student,” Shields said. “As soon as everyone walked in and shut the door, it felt like you could breathe.”

Without the support of staff and professors, Shields said they wouldn’t have stayed at Bethel.

According to Shields, Campus Pastor Laurel Bunker was someone who didn’t follow the same theology as them, but made an impact on them by creating a space to be LGBTQ.

As a graduate of Reconciliation Studies, Shields wants to work to reconcile queer people and the church.

“We’re not here to change Bethel,” Shields said. “We’re here to say, ‘Hey, can we go here too? Can we feel comfortable here too?’”

During the formation of Prism, an on-campus “discipleship group” for LGBTQ+ students, Shields named Bethel’s core values as one of the reasons for the group to be supported.

According to Bethel’s website, the purpose of Prism is to provide “a caring and supportive community for students who identify as LGBTQ+ and same-sex attracted.” The group began after Shields, along with other LGBTQ+ students, the CFCR office and the Board of Trustees saw a need for a safe space. The group allows students to be more honest and open than they would in a group like Shift, the freshman discipleship group.

“Regardless of where you land on Biblical interpretation or on philosophy of education, whatever the sticky categories are here, it’s important to make decisions like this with care and love that goes beyond difference,” Prism adviser Pastor Matt Runion said.

The group has been active for almost three years now, with Runion taking the role of adviser after Jason Steffenhagen resigned from his pastoral position at Bethel in January.

“It is a place for honest engagement in scripture, for authentic community and ultimately a loving place,” Runion said.

“We want people to be able to come and be who they feel that they are to their fullest extent,” Utech said. “Who God created them to be.”

Utech believes that Prism can help foster healthy and helpful conversations throughout campus.

“It should be somewhere you can come and feel safe,” Utech said. “And that’s what I want Bethel to be for everyone, and everyone includes LGBTQ+.”

0 comments on “Places to breathe”