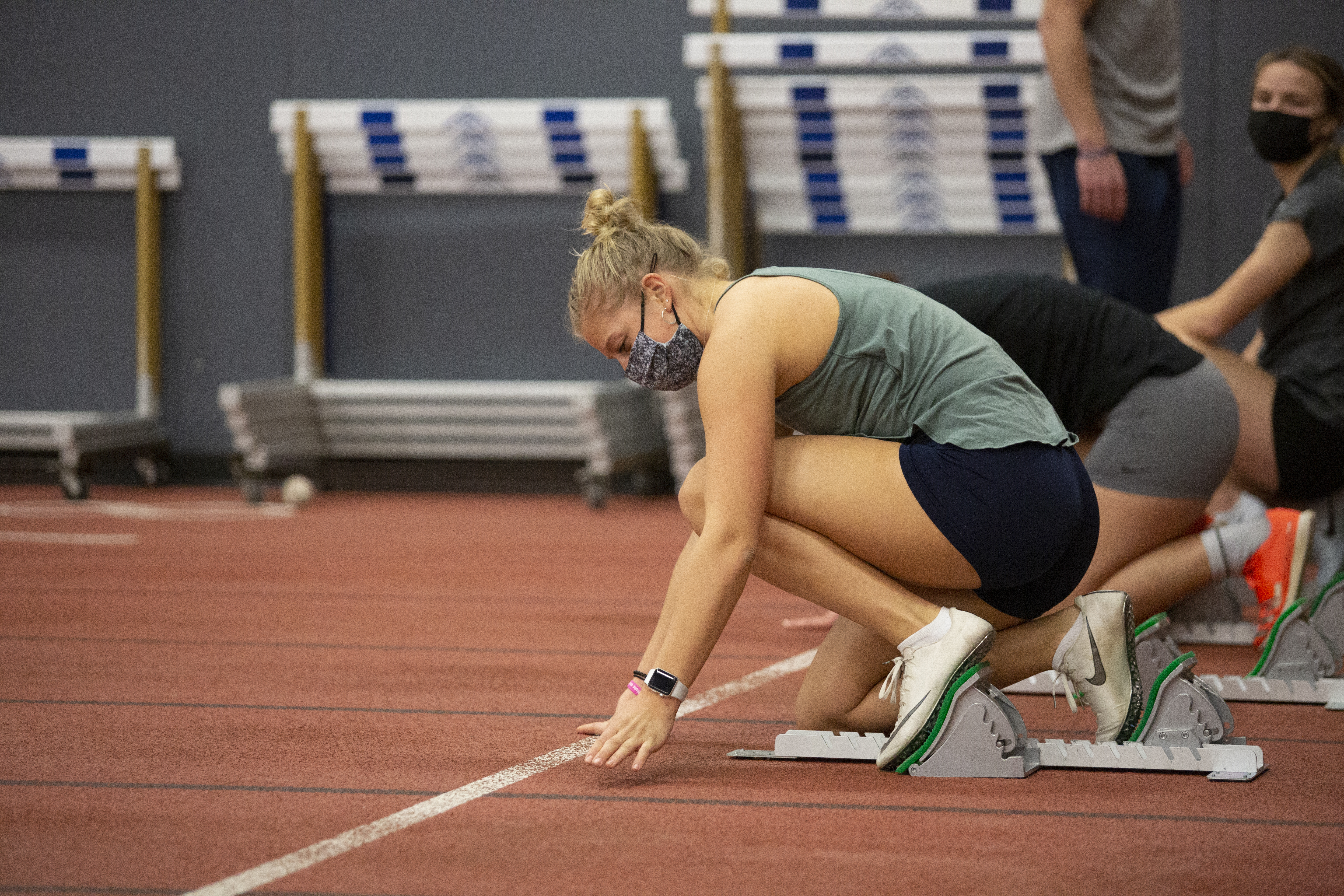 Winter sport athletes deal with the letdown due to the cancellation of NCAA Division III national championships.

Disappointed and deeply saddened. These are the words that come to mind for sophomore track athlete Kelsie Sealock when thinking about the recent cancellation of the upcoming indoor track and field national championship. Athletes in other sports are also facing the same letdown from yet another event being cancelled as a result of the pandemic. This time, it’s the finale to the season and competing at a national level for athletes like Sealock.

Sealock was looking forward to another opportunity to represent Bethel at the championship this year after coming in first place for the women’s 60-meter hurdles last year at the MIAC indoor track and field championship, which qualified her for nationals. She was ready to compete for a national title, along with seven other Bethel track and field athletes, who were all told nationals were canceled as soon as they arrived in North Carolina last March.

On Feb. 3, the NCAA Division III Administrative Committee made the decision to cancel all winter championships this year. This decision came just a few weeks after the Minnesota Intercollegiate Athletic Conference (MIAC) voted to move forward with holding conference winter championships. The cancellation of a national championship is due to a low number of participating schools, according to the NCAA.

At Bethel, athletes in basketball, hockey and indoor track and field are affected by this decision. Gretchen Hunt, an associate athletic director in charge of  NCAA compliance at Bethel, gives some insight into the controversy around this decision.

“Even though only around 50% of NCAA schools ‘opted in’ to the championships, in basketball and track that would be over 200 schools still wanting to try,” said Hunt. According to her, this means there were still thousands of athletes that were hoping to compete at a national level and no longer have the opportunity to do so.

Despite the loss of the national championships, hockey and basketball athletes will still have a chance to play in reduced conference schedules under the MIAC guidelines; though they will not have MIAC conference playoffs or championships.

For indoor track and field, the MIAC had already decided to cancel all meets, which normally host about six different schools. However, there are some track coaches, including Bethel’s head track coach Andrew Rock, who have organized dual meets in order to give athletes a chance to participate in track competitions. These meets are between just two schools to accommodate for indoor restrictions and reducing the virus transmission.

“We don’t want to look like we’ve been doing nothing,” said Rock. “We’re trying to push [the athletes] to their best.”

Bethel has hosted four meets since January; two against Hamline University, one against Gustavus Adolphus College, and one three-team meet against both St. John’s University and Augsburg University.

Sealock is grateful for the work her coaches have put in to give both her and her teammates as much of a season as possible.

“Coach Rock has given us every opportunity to compete with other schools and [have] healthy competitions against our teammates,” Sealock said.

In these dual meets, Sealock continues to set records, with a Division III hurdles record during a dual meet against Gustavus Adolphus College on Feb. 6. Triumphs like this are what keeps the team moving forward and motivated.

“The team atmosphere has been contagious because everyone is still upbeat, lively, fun, and selfless,” Sealock said.

There has been no announcement yet canceling the outdoor track and field championships for both the MIAC and the NCAA. Rock believes that it should be easier to hold these events since they are outdoors and the open air reduces the chance of the virus spreading as easily. Overall, he remains optimistic for the remainder of the track season, regardless of what it will look like.

“In the last 12 months, I feel like I’ve learned as much from them as anything…just on how to face disappointment and continue on, keep fighting and keep going,” Rock said.

At a national level, the NCAA is also trying to give athletes future chances to continue competing in order to make up for lost opportunities. Normally, athletes have five years to play four seasons of their sport but due to the ongoing pandemic, the Division III Presidents Council made the decision in October of 2020 to allow athletes to utilize a “blanket waiver” The NCAA website defines this as a statement that any athlete participating during the 2020-21 school year will not be required to count this year as one of their four seasons of competition. Both Division I and II have made similar decisions. Sealock says she does not plan on staying an extra year to compete another season.

Rock says that he does not anticipate there will be many, if any, athletes that choose to stay longer at Bethel for track and field because of the many factors to consider, such as the cost to remain enrolled and delaying graduation.

Athletes from the 2019-20 school year were given the same opportunity to participate in their sport for another season. Baseball pitcher Connor Malcolm is one of just a few athletes that is taking advantage of this new rule at Bethel.

Prior to the pandmeic, Malcolm planned to stay at Bethel as a graduate student studying special education. He said that he didn’t have to change any plans to be eligible for an extra season of baseball.

“Once the MIAC passed the rule that students in grad school could play, it was pretty much set up for me already,” said Malcolm.

Malcolm has been on the team since his freshman year at Bethel and was with the team in Florida in March of 2020 when the season was abruptly cut short. Malcolm says the team was devastated, but this didn’t stop their community and closeness. The night before they all flew home from Florida, the seniors got together to process the shock of having no final season.

“We were able to have some final moments with all of us together […] which was super cool,” said Malcolm.

Now, nearly a full year later, winter sport athletes have also felt the same devastation of not having a clear end to their season. Still battling the uncertainty surrounding attempts to compete, athletes persevere and continue to put in their maximum effort despite not knowing what the final result will be.

“It’s remarkable, inspiring, heart-warming, and also heart-wrenching that our athletes continue to show up for 7 a.m. COVID testing day after day, for what might be a handful of competitions in their sport,” said Hunt. “If there was evidence needed about the passion they have, the discipline they display, the gratefulness that fills them, and their loyalty to each other and this place—well, I can’t think of better evidence.”

0 comments on “Not mad, just disappointed”