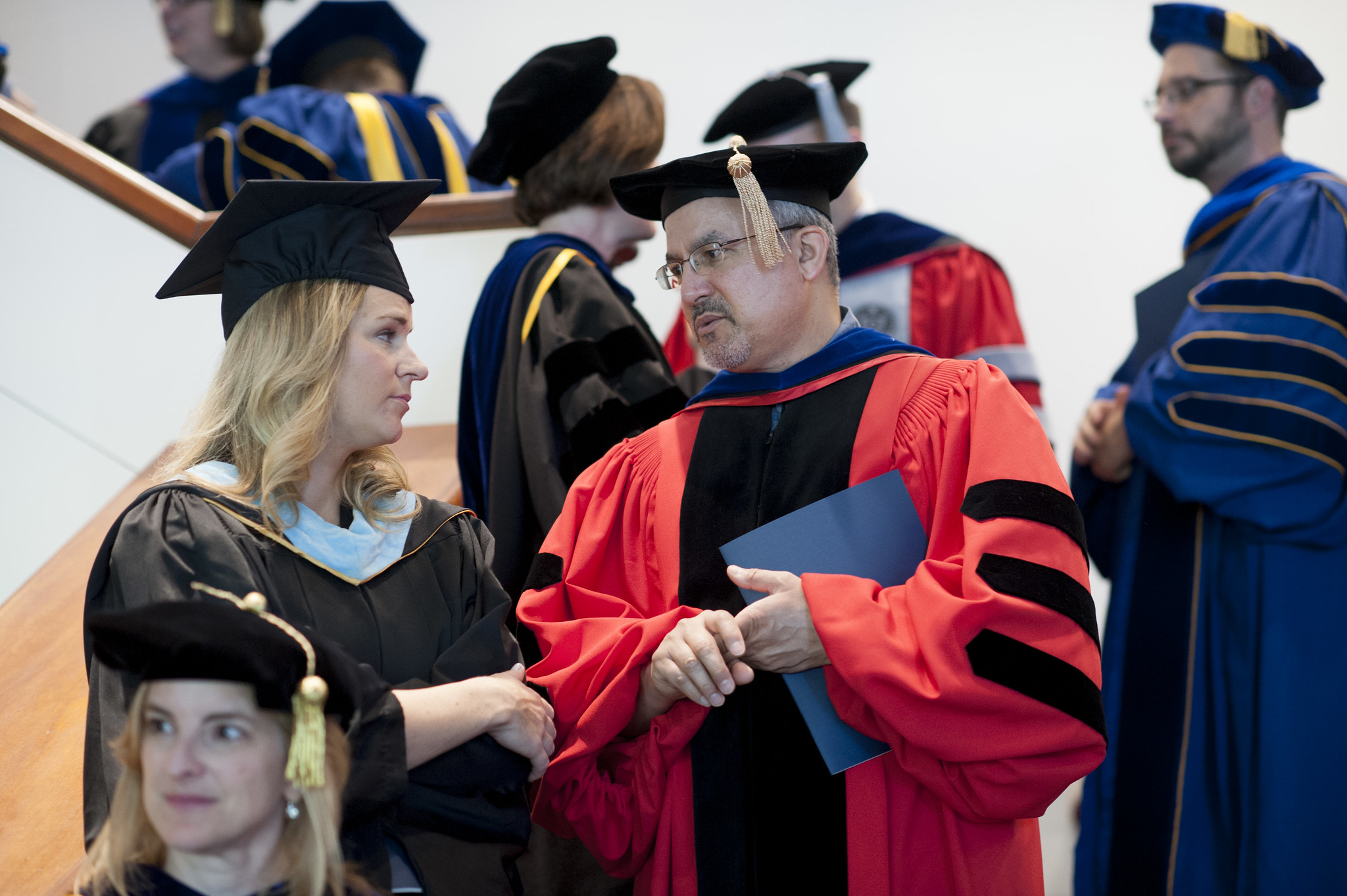 Bethel launched a nationwide search March 1 to find a replacement for the Vice President of Diversity, Equity and Inclusion position formerly held by Ruben Rivera.

As a Latino person of color in Los Angeles, he never saw anyone who looked like him represented in the most prominent circles of society. He didn’t see himself in the public school curriculum, television, politics or even church. The only person in the media bearing his resemblance was a sidekick named Tonto on The Lone Ranger, whose Spanish name translated to “dummy.”

Later, as Vice President of Diversity, Equity and Inclusion (DE&I) at Bethel from 2014 to 2020, Rivera’s goals were to increase diversity to honor the global reach of God’s redemption, reflect the demographic complexity of the world and to make Bethel live up to its namesake as the “House of God.”

Rivera aimed to create an environment in which people of color are surrounded by people who look like them, a university culture reflected in the curriculum, social life and spiritual life of the school. While Rivera said that simply having diversity does not solve problems, creating the capacity for it to thrive makes all the difference.

Following high school, one of Rivera’s friends, David, invited him to attend La Casa de Mi Amigo, a church in Whittier, California founded by Latino former gang members. The church had grown rapidly and done ministerial work with local youth, and there, Rivera was finally introduced to the idea that God loved him. For the first time, he felt that the Bible was talking to people like him, too.

Rivera aimed to be a peacemaker as a result of the violence and misunderstanding around which he grew up.

“I just wanted to be a mentor, because I never had one,” Rivera said. “I wanted to get an education that was biblically grounded.”

Rivera attended Vanguard University in Costa Mesa, California, a Christian liberal arts school where Rivera could count the students of color on one hand. Two or three of them were from his own church, and they would drive to class together.

“How come we’re the only people of color around?” his friend Pete would ask. “Why are we always by ourselves?”

Rivera recalls that not a single academic mentor looked like him. Not in kindergarten, not in grade school, not as an undergraduate or even a PhD student.

Today, Vanguard is made up of 50 to 60 percent students of color.

All around him, Rivera saw people defined by their political affiliations, gangs and races rather than religion. It was the leadership at his church and professors at his university who led him to understand Christianity.

“They loved the Lord and they really cared about me, and that kind of woke me up,” Rivera said. “I realized, ‘Oh, being a Christian really can change your heart.’”

After graduating Vanguard with a bachelor’s degree, Rivera attended Gordon-Conwell Theological Seminary for his master’s and Boston University for his doctorate before teaching at Bethel; coast to coast with various churches in between.

“The journey helped me to see how ingroup and culturally captive Christians and churches can be,” said Rivera.

Six years ago, former Bethel President Jay Barnes asked Rivera to move from his role as a history professor to the Vice President of DE&I. Initially, Rivera didn’t want it. Two teaching assistants begged him not to take the position, saying that his work in the classroom was more impactful than anything administration could accomplish.

He ultimately decided to take the job – but only for a year while still teaching classes, allowing the administration to search for a permanent hire. But after eight months, Rivera realized God was calling him to the position.

Health issues forced Rivera into what he called an early retirement December 31, and Bethel Campus Pastor Laurel Bunker took over his role in addition to serving as Vice President of Christian Formation and Church Relations.

Rivera said a necessary operation and leave of absence, as well as a strong retirement package offered to his wife, Anita, contributed largely to this decision.

“Perhaps the biggest reason is that I have wanted to slow down and focus on my writing and spend more time with my family,” Rivera said.

Bunker now works with faculty and staff to address cultural responsiveness in the classroom, curriculum instruction and groups designed to facilitate conversations on anti-racism and peace-making. Bunker is also working on the Diversity, Equity and Inclusion Plan that Rivera started prior to his retirement.

“Caring well for our students is of primary concern to me,” said Bunker, who now spends additional time working with students of color and on issues that impact them.

While Bunker serves as Interim VP of DE&I, President Ross Allen and his Cabinet are engaged in a national search for a new employee to fill the position.

In an email announcing the launch of the search, Allen addressed Bethel’s commitment to striving toward a future that is equitable, just and hopeful. He has been encouraged to see the university engaging in efforts like the Take Action group and Micah 6:8 training, two faculty and staff initiatives to seek racial reconciliation through dialogue.

According to Bunker, the national search for the next person to fill the position has only just begun. She hopes whoever fills the position is not only a strong academic, but is also personable and works well with students and staff alike. The position should be filled by a visionary, Bunker said, who can spur Bethel’s growth forward in its ability to live out justice in a biblical sense and improve retention of staff, faculty and students of color.

“I recognize that I stand on the shoulders of people who have broken barriers and battled issues long before I have,” Bunker said. “Those people have mentored me and taught me to love others while not compromising my spiritual or cultural values. It has not always been easy; in fact, it has been painful and isolating at times.”

Part of Rivera’s most lasting legacy is a poem titled “Heaven is Other People” on display in Bethel’s Cultural Connection Center, a space for engaging in dialogue about diversity and providing education opportunities to strengthen multicultural relationships across campus.

“I was a young man who grew up inside his own head,” Rivera said. “I try to use poetry as a way of engaging in some of these really challenging issues that our society faces.”

Rivera read “Heaven is Other People” at one of the faculty meetings following George Floyd’s death. Many people reached out to him asking for a copy after the meeting, saying that for the first time, they were recognizing that their Christianity was an in-group concept.

Rivera drew inspiration from a theatre line that read, “hell is other people.” Aside from its meaning in the context of the play, Rivera took it to mean that the worst thing that could happen in Hell is being stuck with people he didn’t like. He took that concept and turned it on its head, claiming, “Heaven is other people, and you need to get ready for it.”

Rivera aims to get people to recognize that their own in-group Christianity and view of heaven is unremarkable. Heaven will not consist entirely of English-speakers, one culture or one color, he says.

“I just wanted to get people to start thinking a little bit differently about the values they claim that they hold,” Rivera said. “American Christanity is incredibly materialistic and sometimes unwilling to change.”

Over and over, Rivera has witnessed Christians withholding love, patience and understanding from those who are different from themselves.

“One significant problem is that sincere White Christian leaders in churches and schools assumed they would always be the gatekeepers,” he said. “They might open doors to diversity, but resistance arose when ‘diversity’ did not follow what they thought things should look like.”

While Rivera knows some great Christians, he also knows some who haven’t grown. He knows people who claim to be Christian but still hate people. He is baffled by the reality that a person who walks with Jesus for 50 years can turn around and engage in racial discrimination against Asians because of the “kung flu.”

“Christians are sometimes the hardest people to reach, because they’ve already found the truth, the way and the light,” Rivera said. “What they don’t know is that they can still be very prejudiced. This isn’t a White or a Black thing. This is a human thing.”

Nowadays, Rivera writes poetry in his Twin Cities home, meeting in a poetry group via Zoom with his wife regularly. He hopes to publish his work in the future. He also continues work on “Remarkable Christianity,” a work expanding on the Shalom Seminar he created for Bethel employees.

Rivera hopes to see Bethel continue its growth in terms of demographic diversity, not only in students but in faculty and leadership. While he credits a number of White employees who work hard to make Bethel a welcoming environment, he acknowledges that many students of color turn away from Bethel because it notably lacks diversity.

“Let’s just say that history is not through with Bethel, any more than the country as a whole.” Rivera said.

0 comments on “‘Heaven is other people’”