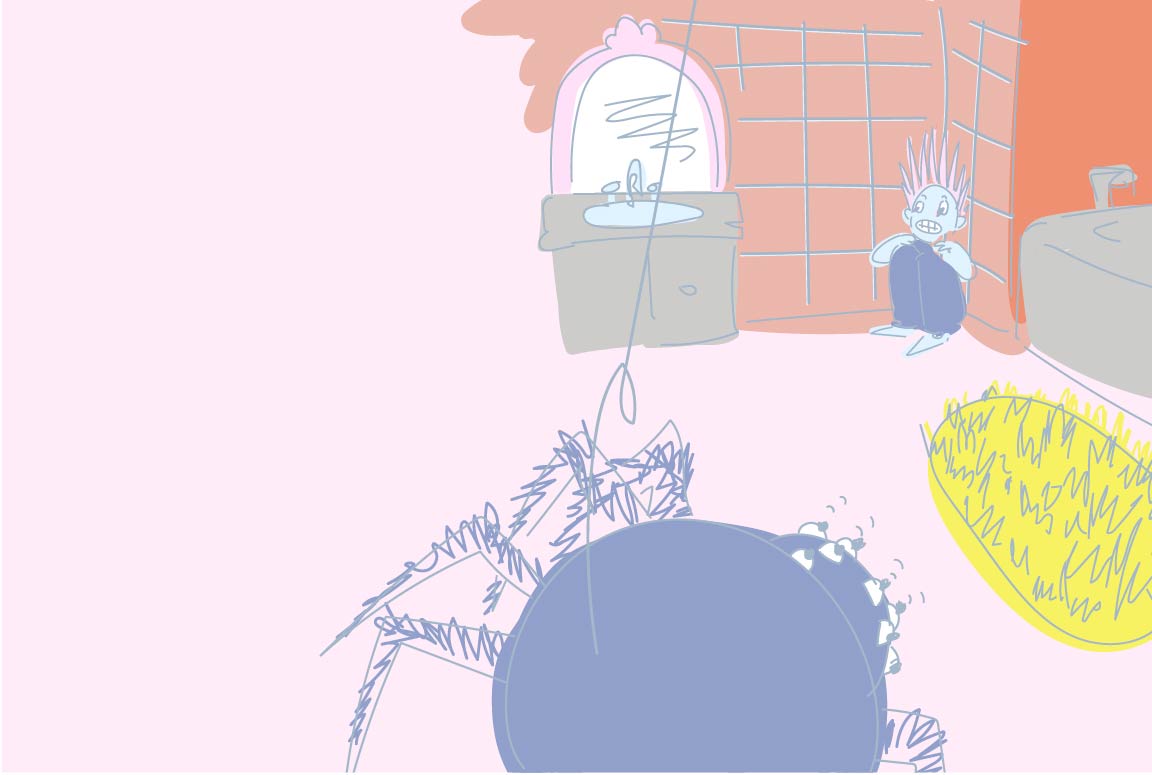 I must have looked ridiculous, crouching there on the cold basement bathroom tile with a fistful of Kleenex. I didn’t care. I was determined. I stared hard at my target and it stared back, waving one of its eight slender, hair-like legs at me.

It wasn’t really about the spider. At least not entirely. It was more about proving to myself that I wasn’t afraid anymore — of spiders, of people, of the future in front of me. So I crouched there, poised to kill. And I watched the tiny black arachnid spinning webs in the corner of my bathroom transform into the anxieties and fears and frustrations that dwelled in the darkest corners of my brain.

I thought back to middle school, when the chaos seemed to start. When I went into survival mode rummaging through my older sister’s closet to steal American Eagle T-shirts that would impress girls with highlighted hair and hyena laughter. When I allowed thick gel eyeliner to settle into the creases under my eyes because I thought it made me cool and pretty and mature.

But I had odd fears I couldn’t explain. I hid in fruit-scented locker-room stalls and calculated the time it would take Mrs. Wilhelm to call everyone to the gym, just so I could avoid making conversation with someone for those dreaded 15 minutes before playing indoor kickball. In class I couldn’t pay attention to what my teacher was saying; I was too busy obsessing over whether impromptu group work was part of that day’s lesson and whether I had friends in that class to join a group with.

My mother told me that when I was four years old, my preschool teacher was concerned I had selective mutism, a severe anxiety disorder in which a person is unable to speak in certain social situations. But my mother wasn’t worried. When adults at church made jokes about my “shyness” or tried to get me to talk, she simply said, “Emma will talk to you when she’s ready.”

Fifteen years later, I came to Bethel and majored in communication. I brushed my teeth alongside 20 other girls on a communal floor, worked at a call center and joined the student newspaper. By senior year, I became editor-in-chief. People who knew me from childhood took one look at me and said, “Wow, you’ve grown so much!” I thought I was cured.

But those habitual fears never fully went away. They lingered and wrapped around my body like a sticky spider web. They looked straight at me as if to say, “I could kill you if you let me.”

I recently drove to Valvoline for a long-overdue oil change, and I saw a group of mechanics standing outside the garage smoking cigarettes, yelling and cackling at one another. Without thinking, I zipped past the entrance and into an adjacent neighborhood. I was back on the bathroom tile, paralyzed with a wad of Kleenex in my hand.

As I drove past rows of manicured lawns, I realized I’d been treating my hairy, eight-legged fear like a dear old friend. I’d been pulling up a chair for it at my dining room table and hand-feeding it pieces of myself, pieces that weren’t even left for me to give. I had fallen into a core belief that I was fundamentally different from everyone around me. They were normal. I was not.

But parked in front of a big yellow house, I cornered that arrogant intruder inside of me and squashed it. Hard. I threw its crumpled body on asphalt and watched it fall into a dizzied panic, each of its eight legs slowly disintegrating to dust and mixing with the bits of gravel below.

Then I reached a cul-de-sac, turned around and steered my car into the Valvoline.

A few nights later I lay on my musty gray carpet with a sleeve of saltines and decided I didn’t need normal. We all hide things about ourselves that give us fright; we all know what it’s like to feel inadequate next to shinier, prettier, more accomplished people. So if normal existed, I didn’t need it anymore.

I was ready, just as my mother always knew I would be.

0 comments on “Fear has eight legs”