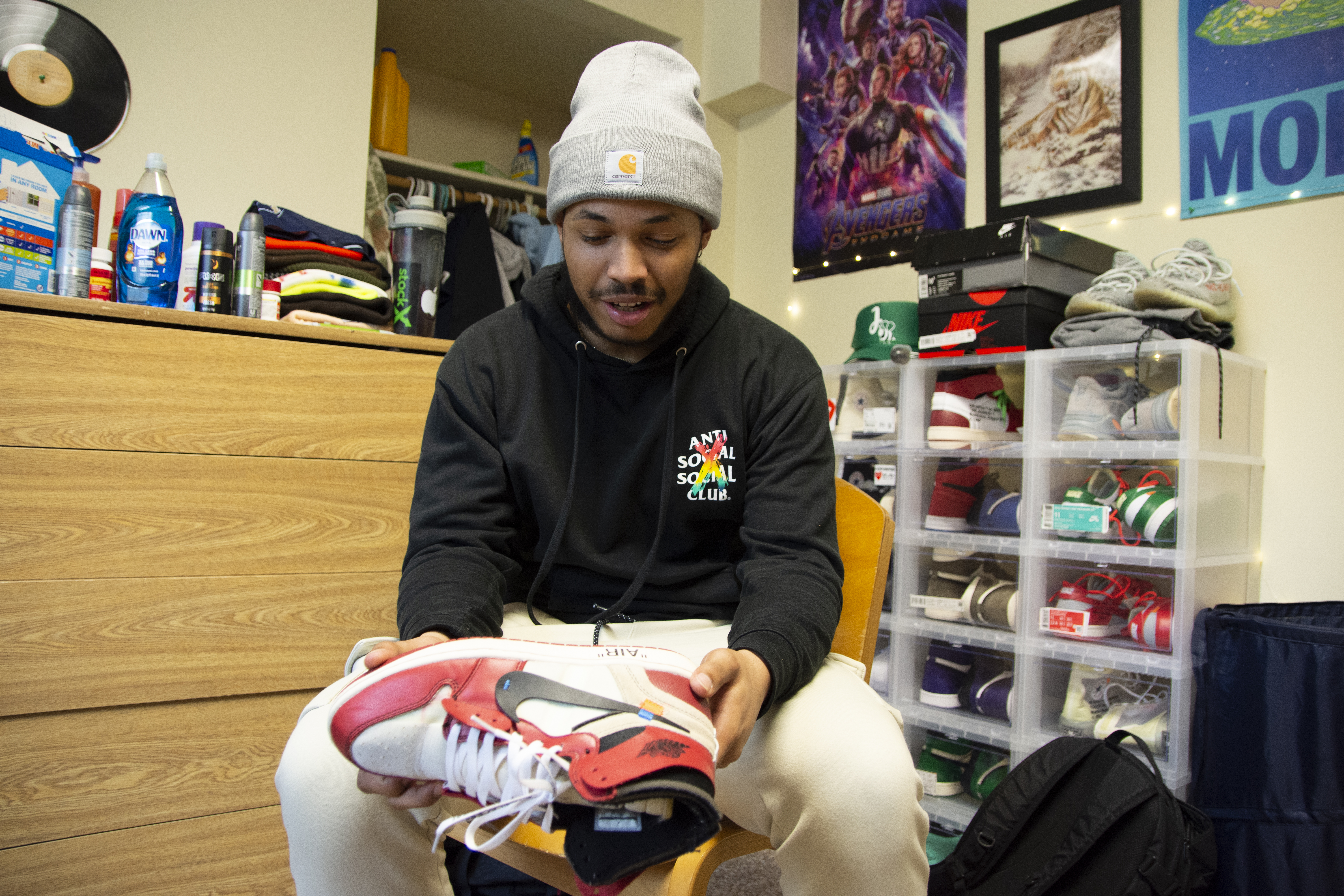 Finding comfort and success playing Bethel football and starting a shoe-selling business, Bronson Pe’a dreams of living a life far from the tragedy, violence and homelessness that marked his childhood.

Sophomore Bronson Pe’a holds a pair of red, black and white Air Jordans in his hands, what he hopes is a ticket out of the life he grew up with.

Pe’a grew up in the Logan Heights neighborhood in San Diego, Calif. where his mother struggled to keep up with house payments. Pe’a, his mother and three siblings grew up moving from home to home, sometimes using a car for shelter. Pe’a never knew his dad.

He remembers receiving an Xbox for his 14th birthday, but otherwise didn’t expect much with so little money to be spent.

After living in a grey Volvo for six months, his mother, Lehua, decided to stay at a homeless shelter for a night where they’d be given a cot to sleep on and a hot meal. During this stay, Pe’a remembers eating half a bag of Cheez-Its and laying down on a bed for the first time in months. When he awoke, a man near his cot was holding the bag of crackers. Pe’a decided then that he would never be in a position in life to be that desperate. He would work for a financially stable life.

“From that point on, I knew I couldn’t be homeless,” Pe’a said. “I knew I had to get out of there; to figure out a way to make my family’s life better.”

For him, that meant focusing on school, starting football and working at fast-food restaurants while growing up. These things would lead him away from the neighborhood where he witnessed the death of his friend.

At 7 years old, Pe’a walked to school with his friend, the same route he took every day. On a cloudy Tuesday in Logan Heights, a black car, the kind that makes you tense up as it drives by, pulled up to the curb. A man got out of the car, pulled out a gun and shot Pe’a’s friend.

As quickly as he came, the man hopped back in the car and drove away, never to be found. He left Pe’a be.

He ran home to tell someone, then went to school and on with his day. Looking back, he doesn’t know how he did that.

“My friend and I grew up in the same area but he partook in some of the things I didn’t partake in, so that was the difference,” Pe’a said.

Such violence wasn’t a rare occurrence where he grew up. Even today, Pe’a has four friends with 20-plus year prison sentences and another friend who was shot a few weeks ago in the neighborhood he grew up in. Pe’a’s loss has followed him to Bethel, but he knows college is where he needs to be to have the stability he dreams of.

At 16, Pe’a made a big move. After finding out his mother had missed four months of house payments, he moved to Washington state to live with his sister and brother-in-law, who were financially stable.

That’s when he played football for Lakes High School in Lakewood, Wash. The coaches threw him in, realizing he played for a highly-ranked team in California. But Pe’a had barely played back home. His coaches weren’t easy on him, but he stuck with it.

Pe’a met Jaydon McMillon, now a freshman business major at Bethel, in the weight room at Lakes High School. They were both on the football team and instantly got along. The two spent everyday together between class, football and playing Madden at each other’s houses. In November of his senior year, Pe’a moved into the two-bedroom apartment McMillon’s family lived in.

“They accepted me as their own and I never had that before,” Pe’a said. “When [home life] was more stable, school went a lot better and there was a lot of weight lifted off my shoulders.”

McMillon heard Pe’a’s story and could somewhat empathize with having an absent father – his father is in the military and was stationed during much of his high school career.

“We were able to talk through it and use it as momentum,” McMillon said. “We want to be able to do better for ourselves so we’re able to support our families. We want to make sure we’re an influence in our childrens’ lives. We want the things we didn’t, in a sense, have growing up.”

A future he can rely on

As a sophomore marketing and human resources major, Pe’a isn’t sure what he wants to do after graduating. All he knows is school and perhaps a shoe business will lead him to the life he wants.

“Until I was 12 and really understood what jobs were like, I wanted school to take me to be a trash truck driver,” Pe’a said.

He started making money in seventh grade when his mother bought him Jordan Retro Maroon 6’s that he resold to people who were willing to spend $1000 on a pair of shoes. Once he started working at KFC, he bought more and more shoes and has now sold about 350 pairs. He uses his Instagram page, Schoolboy Kickz, to market his shoe finds.

When McMillon started looking at colleges, Pe’a told him to consider Bethel. After he stayed with Pe’a during a visit, McMillon knew that Bethel was for him. The Lakes High graduate started Bethel this fall and said Pe’a makes being far from home easier.

“We always talk, ‘We can’t go back to that.’ Whenever we touch the field, we’re like, ‘Hey, remember why we do what we do,’” McMillon said.

Football has made it easier for Pe’a to be far from familiarity. The defensive line and special teams coach A.J. Parnell became a father figure to Pe’a, bringing him home to see what a healthy home life could look like. He also shows Pe’a support by going with him to doctor’s appointments.

“He wanted me to experience life raising a solid family in a nice neighborhood,” Pe’a said.

For now, Pe’a is okay with being 1,990 miles away – but he thinks about moving back to San Diego where the temperature doesn’t dip below zero. Although his relationship with his mother is distant, he’s hopeful it will get better. He calls once a month to update her on how school is going. She also tells him about school, as she attends a community college to work in business administration.

“Communication is getting better and I can understand things as I get older,” he said.

As an older brother, Pe’a’s motivation partly stems from the desire to be a positive example for his siblings.

“Now that I see them following in my footsteps, there’s pressure to keep going because they only have me as an example. I’m kinda leading the way now, figuring it out for myself while they’re watching and seeing what I’m doing.”

Pe’a holds his future in his hands. The sneakers are just a symbol of the life he wants, a life where he doesn’t need to worry about where he’s going to lay his head at night.