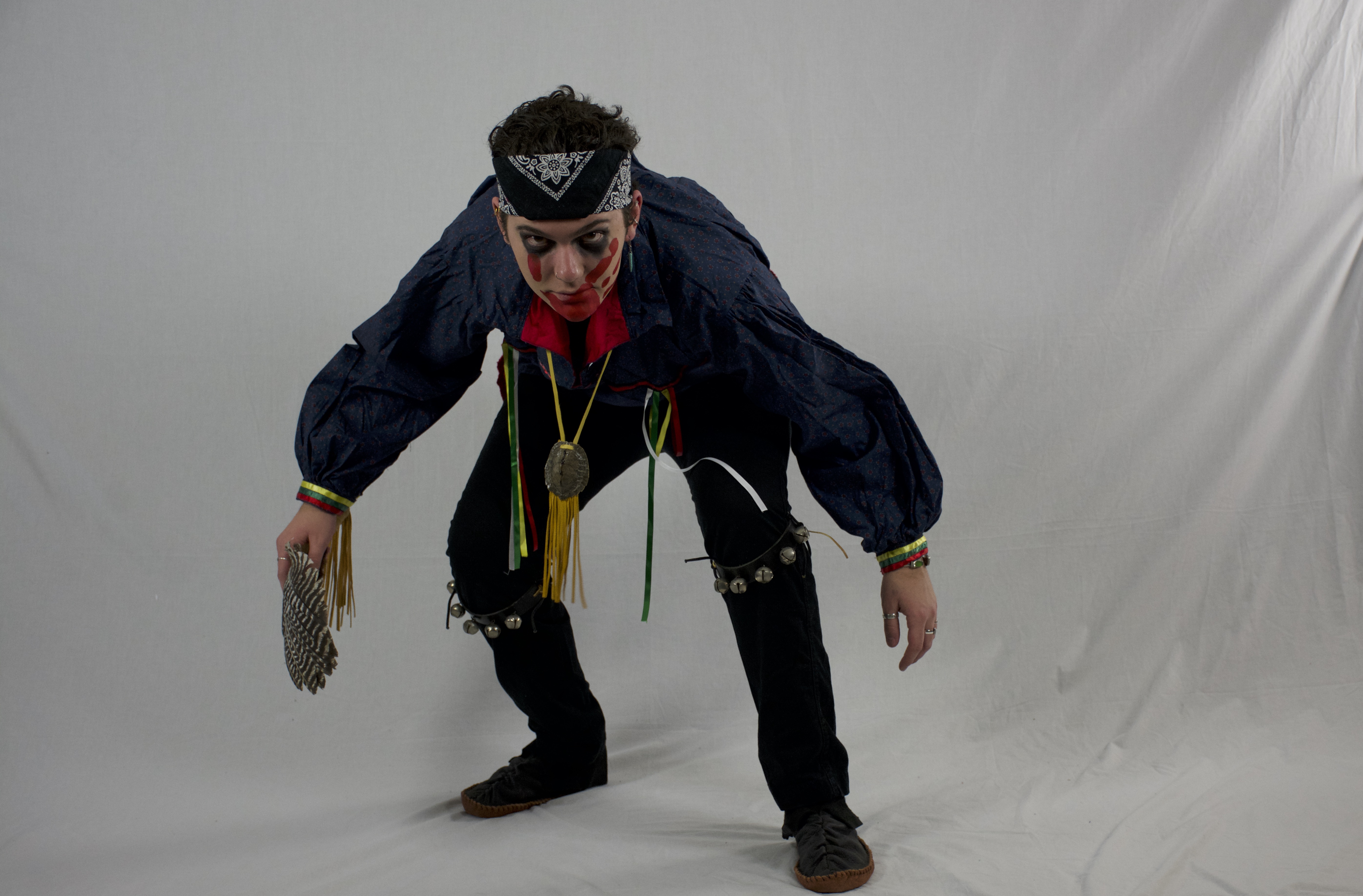 Although emphasized as a part of America’s past, Indigenous Americans at Bethel are working towards increasing awareness and representation of their cultures.

Bridger Foster feels free when he dances in the annual powwow on the Red Cliff Reservation in Bayfield, WI. Eagle feathers in his hand, red paint on his face, bells on his legs and dressed in the regalia of a classically trained dancer, Foster follows the crowd clockwise around the gazebo as drummers beat out the rhythm. The beat of which represents the Anishinaabe people’s connection to the earth. Although hundreds of people come to watch and participate, Foster barely notices that.

“It’s very euphoric and very just in the moment,” Foster said. “Like nothing else matters. I feel very connected to my ancestors and I feel very at home.”

Foster, a junior nursing student at Bethel, is a card-carrying member of the Métis tribal nation in Ontario. This means that he holds official tribal membership with the Métis. He also has Huron and Wyandotte heritage and grew up surrounded by the culture of the Anishinaabe Ojibwe people in Northern Wisconsin. Foster is the director of the First Nations subgroup of United Cultures of Bethel and helps plan events throughout the year highlighting Indigenous American culture.

The de facto advisor for the First Nations subgroup of United Cultures of Bethel is Associate Professor of Communication Studies Dr. Scott Sochay. Originally from Northern Michigan, Sochay is a card-carrying member of the Little Traverse Bay Band of Odawa Indians. Unlike Foster, Sochay did not grow up surrounded by his native culture. Sochay’s father wanted to distance himself from the tribe after witnessing and experiencing discrimination because his mother, Sochay’s grandmother who was an Indigenous tribal member, married a white man.

“I grew up knowing I was Indian but not really knowing a whole lot about what that meant,” Sochay said.

It wasn’t until college when Sochay was really able to explore his heritage. Sochay received a scholarship to Michigan State University through the 1971 Native American Tuition Act because his grandmother was listed in the 1908 Michigan tribal census.

“Knowing that my native heritage was going to pay for my college education, I said, even though my dad really wasn’t all that interested in passing on his heritage, I want to learn what it means to be native now that it’s paying for my schooling.” Sochay said. “That really in a sense was the catalyst for me really starting to ask that question: What does it mean to be native?”

From this point on, Sochay dove into the culture and history of his ancestors when he got involved with the North American Indian Student Organization at Michigan State. By listening to speakers, participating in campus powwows and reading up on his specific tribal history, Sochay soon realized that the way he saw the world was “more native than that of mainstream Western culture.”

“In Western culture we tend to separate faith from reason, religion from science, the natural from the supernatural,” Sochay said. “In native cultures there are no walls of separation or distinctions. Spiritually, Native Americans see the world as far more alive.”

Because of this, he sees all aspects of the natural world as sacred.

Growing up in Northern Wisconsin, Foster and his tribal community hunted, fished and gathered only what was necessary for food and natural herbal remedies. With these practices he gained a deep respect for nature.

One way that Foster tries to emulate this respect is by living with zero waste. Back home, the Anishinaabe are very conscious of the resources they use. For example, if an animal is hunted and killed for food, the community uses every part of the animal, not just the parts they want to eat.

Foster crochets old t-shirts and plastic bags into blankets and sleeping mats for the homeless. He is also working with Bethel grounds crew to set up a compost pile on campus.

“I believe very much that God created everything we see and loves everything that he created,” Foster said. “So, for us to go around destroying what he created is disrespectful to Him.”

Respect for the earth has also led both Foster and Sochay to resist the replacement of the Line 3 Pipeline in Northern Minnesota.

Line 3 is a pipeline created by Enbridge, a multinational energy transportation company, to transport tar sands crude oil from Alberta, Canada to Superior, Wisconsin. Enbridge has plans to replace the pipeline with a new route. Both the current and future pipelines run through tribal lands, which are sovereign nations and protected under treaties with the U.S. government.

Environmental groups, tribal nations and their allies have staged regular protests for six years in order to prevent Enbridge from building a new pipeline.

“The Native American perspective is we are trying to protect our water because we consider it sacred,” Sochay said.

Activists also resist the pipeline because if a spill occurs, it would negatively affect the ecosystems of Northern Minnesota. Polluted water would hurt the fishing and wild rice harvesting that is essential to the culture of Indigenous tribes across Minnesota. However, this pollution would affect more than just Minnesota as spills would flow into the Mississippi River headwaters and the Lake Superior watershed, depositing tar sands into the Mississippi River and Gulf of Mexico.

This is a nightmare for many Native Americans that has already started to play out. 30 years ago, Line 3 ruptured, spilling 1.7 million gallons of tar sands and oil into the water system.

“So, it’s happened before. It’s not like the oil companies can say, ‘Oh this’ll never happen,’” Sochay said. “It has. And it’s happened in a big way.”

Line 3 is not unique in its controversy. Sochay’s tribe is dealing with a lawsuit of its own against the Line 5 pipeline in Michigan, and Foster’s family has been involved in the Dakota Access Pipeline protests throughout the past few years.

Sochay hopes that the treaties created years ago with many tribes across the United States will be upheld and that pipeline construction will stop.

“Native tribes that are recognized by the federal government are considered sovereign nations. You don’t enter into a treaty with anyone other than a sovereign nation,” Sochay said. “And so, when we don’t want pipelines through our tribal lands or potentially impacting the waters that we use to fish and grow wild rice, we are asserting our sovereignty.”

Foster hopes to better educate the Bethel community not only on the effects of a new pipeline, but about Indigenous cultures as a whole. He is talking with Bethel professors about how to accurately represent Indigenous Americans as not just a thing of the past. Not just as people only mentioned in chapters on colonialism in American history textbooks. According to the United States Census Bureau there are more than 2.9 million Indigenous people living in America to this day. Foster is also working on restructuring the Bethel Covenant for Life Together so that it is more culturally inclusive.

“Because there has never been in a sense what you would call a critical mass of native students here on campus, it’s very difficult to help develop a native community,” Sochay said. “As a Bethel faculty member, I often feel isolated at times because whenever anything here on campus happens that involves Native American culture in some way, shape or form, I know I am going to be called on whether I want to be or not. And sometimes that can be a little bit tiring or weary.”

Although both Foster and Sochay wish that Bethel would do more regarding Indigenous American representation, they realize that Bethel isn’t always the one to blame.

He wishes that Indigenous American culture and rights were less overlooked and forgotten.

“As Native Americans we tend to get tired of issues related to diversity and civil rights [being] almost always framed exclusively in a Black-White context,” Sochay said. “We often feel like we are just left out of the discussion.”