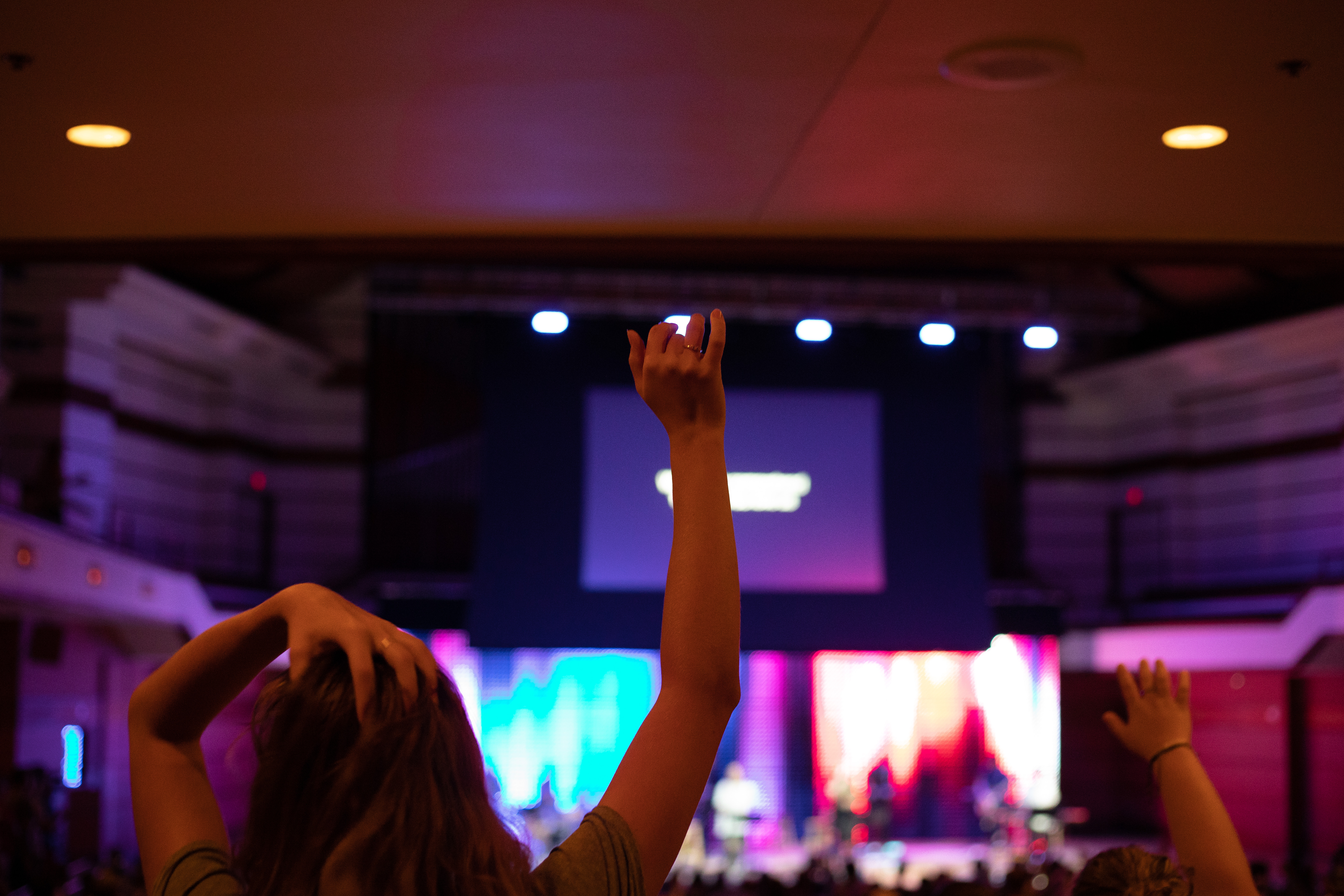 Koinonia acts as the first Vespers service of the year, providing students with a time of worship, inspiration and communion.

For the first time since Bethel shut its doors in March 2020, the Bethel University community came together to worship. No masks. No social distancing. Bass pumping as the United Worship band opened the service with “Ready or Not” by Hillsong UNITED.

The band quieted down as junior Josh Sampson took the stage to introduce the speakers for the night. The first was Lissner RA Noah Meissner.

The sophomore missional ministries major talked about a decision he made in October of his freshman year. One which hurt some of the people around him. He realized he had no idea how to handle the consequences.

“I didn’t know who to go to. I found myself feeling very alone. I also knew the situation was my fault, so I let myself feel alone as a punishment,” Meissner admits. “Since I chose to react that way, there were many nights I found myself lost in emotions. Crying in my dorm room begging God to send someone to open the door.”

Meissner knows there were many people God could have sent, only no one came. He was forced into a new realization, one he wants to pass onto the incoming class of 2025—God was with him the entire time.

“It sounds Sunday school simple… but once I found that out, it really changed things for me,” Missner said. “The same God that comforted me through my worst is the same God that will comfort you through your life.”

Once Meissner walked off stage his place was taken by Malakai Holloway. She talked about how she spent quarantine being consumed by bitter, jealous emotions.

“Why are we sitting in our rooms when all I want to do is be with my friends? Why are so many of my people, who look like me, being killed when all we want to do is live?” Holloway asked.

Holloway continued to look at other people’s lives and see only green grass. For a while, even though she wanted to change that, she couldn’t.

She then remembered something her mother used to tell her: don’t expect a different answer from the same formula.

So Holloway changed the formula by changing how she saw her situation. She then challenged the freshman to change this as well.

“When I look at you guys and I look at all of you freshman and your new faces: change your formulas as you go to this new season of your life, okay? Because it is not enough to just understand and see with your eyes, you have to go out and have a base around you,” Holloway said. “So, the funny thing I would love to leave you with is don’t worry about the greener grass in someone else’s pasture, because, let’s be real here, they probably spray painted it.”

The last speaker was Track and Field Coach Andrew Rock. He told the story of his adoptive daughter, Ophelia.

Three years after marriage Rock and his wife Missy decided they wanted to adopt. In that process, Missy came across a girl from India with special needs. From the start, Missy knew she was the perfect first child for their family. It took Rock a little longer to realize that.

Three times he went to Missy to say they could not adopt her. The third time was over the phone. He told her they couldn’t do it and needed to tell the adoption agency the same. He then hung up.

“Within two or three minutes, I felt this incredible loss. I felt like I had just made the biggest mistake of my life and I had just given my daughter away,” Rock said.

That was 11 years ago. Through the many trials and joys since then, Rock is grateful for God’s patience with him. While he recognizes that the freshman class won’t be adopting children any time soon, he does know they will still find themselves in hard times.

“No matter how inadequate or unprepared you feel [God] will walk with you and prepare you,” Rock said.

Once Rock had finished the band stood up and once again played a few songs. Then, Pastor Dale Durie presented communion. When Durie was finished, the band played more upbeat songs so loud that the goblet being used for communion fell off the stool onto the stage and shattered. Pastor Matt Runion, who spoke last, noticed the glass when he walked on stage. When he pointed it out to the audience there was shock and laughter. Even those in the front rows hadn’t noticed the mess.

“I’ve been saying for a little bit that it feels so much sweeter because we didn’t have it last year,” guitarist Josh Hinrichs said. “The way everyone got to connect with God tonight was so tangible.”

0 comments on “Coming together in fellowship”