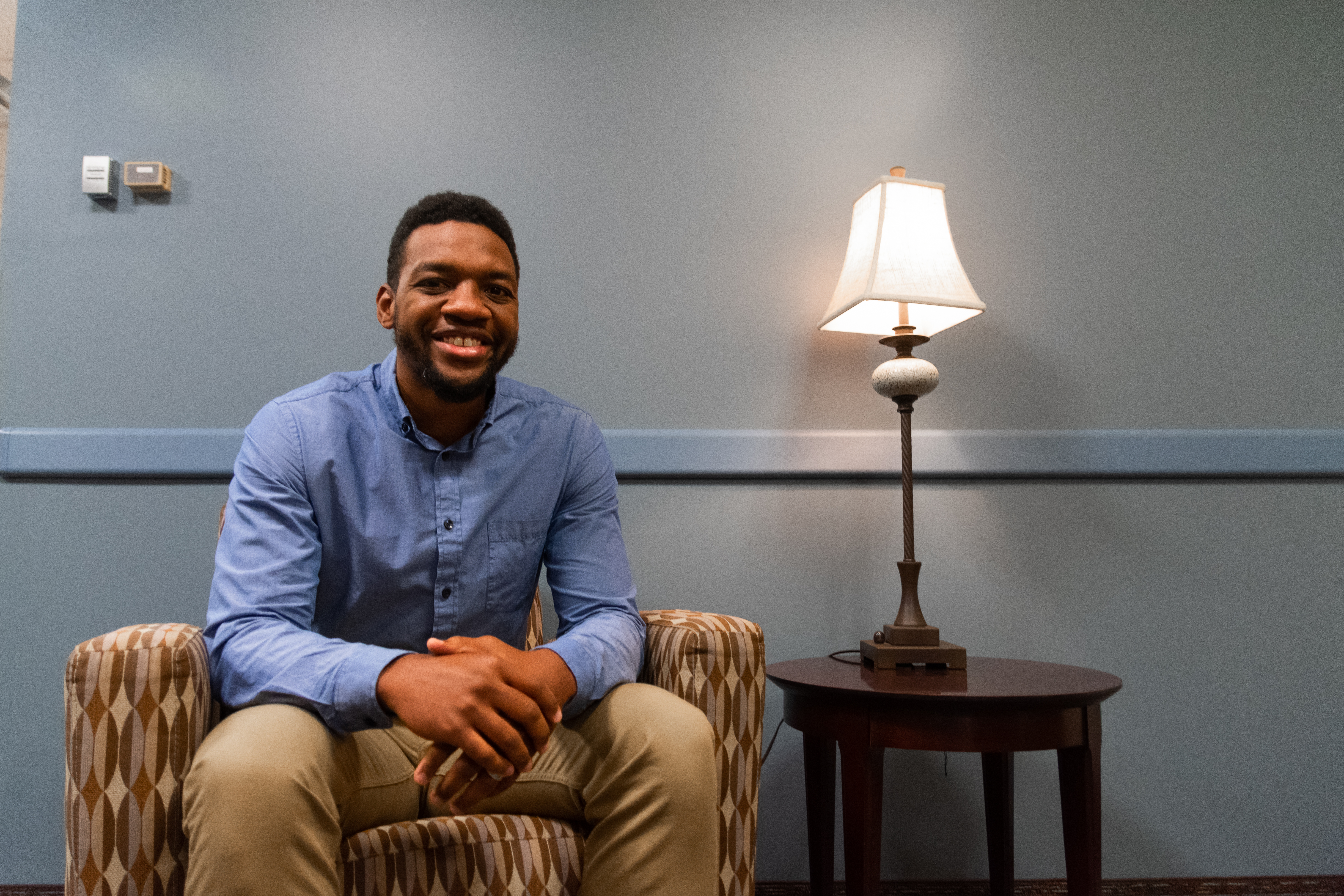 Rahn Franklin walked into the foyer of his Kansas City church and saw flags from countries  representing the diversity of his community.

Growing up in Missouri, Franklin says he was surrounded by people from a wide expanse of cultures, languages and lifestyles. He began his role as Bethel University’s new Vice President of Diversity, Equity and Inclusion Aug. 30, where the College of Arts and Sciences is made up of only 16.9% BIPOC students.

“My interest in this work is because of what I was exposed to as a youth through school, sanctuary and sports. Those three S’s were pretty significant for me,” he said.

Photographs of his high school sports teams show teammates from Sudan, Mexico, Ghana, the United States and other places. His church foyer served as a stark contrast to the single American flag inside the sanctuary of many Midwestern churches. Franklin’s classrooms were full of students who spoke multiple languages.

Franklin’s move to Iowa for college was shocking. The small town agrarian culture was unexpected in comparison to the cities Franklin was used to.

At BVU, Franklin studied sports and fitness management. The school of about 2,000 undergraduate students is located in Storm Lake, Iowa, which Franklin said is the most diverse city in the state. According to the 2020 Census, 90.02% of Iowa consists of white residents.

Franklin also earned a master’s degree in counseling from BVU before getting a PhD in Education and Organizational Leadership from North Central University in Minneapolis.

Franklin was in class during his counseling program with a woman named Chelsea Town, who was applying for the Director of Multicultural Student Development at Northwestern College in Orange City. The two got to know each other very well.

Town realized the position was perfect to Franklin. She withdrew her application and gave Franklin’s name to the university.

“[A] tremendous sacrifice,” Franklin said. “She changed my trajectory.”

When he landed the position, Franklin did work similar to his work at Bethel but operating at a higher level of the institution. He served there starting in 2011, ending a full 10-year stint with his move to Bethel.

“We learned a whole lot of things about life and how to do cross-cultural, intercultural work in a biblical perspective in that space,” Franklin said.

Northwestern College President Greg Christy, who will complete his 14th year at the university in December, was present for the entirety of Franklin’s 10 years as Director of Multicultural Student Development.

“Rahn was just a wonderful support for all of our students, but in particular our students of color,” Christy said. “He is a people person with a glass-half-full type of attitude and just a joy to be around and to work with.”

In Franklin’s time at Northwestern, he and Christy pioneered a program called Bridge Scholars, which focuses on leadership development for multicultural students.

Franklin worked closely with those students and helped them grow and develop leadership, reconciliation and cultural intelligence skills.

According to Christy, Northwestern’s diversity rate has stayed between 13 and 15% for the last few years. Bethel is only slightly more diverse.

“I’ll always be grateful for the work that he did in helping us to develop that vision for diversity and help us live it out,” Christy said. “Our loss is your gain.”

Franklin’s brother, Stephen Franklin, coaches football at Bethel, one of the many connections that drew Franklin to the role. The brothers, along with Franklin’s wife, Rachel and current BUILD Internship Supervisor Ryan Anderson, had lived together in 2014.

“The three of us together now working in the same place is unreal,” Franklin said.

Among a host of other Bethel connections, Franklin knew Frogtown’s Assistant Director of Community Engagement Tanden Brekke through a North Minneapolis leadership development program and former Campus Pastor Laurel Bunker through the Multi-Ethnic Leadership Development Institute through the Council for Christian Colleges & Universities.

“[Laurel and my] relationship is really what kind of sparked the chain to make this application process happen,” Franklin said. “God was telling me … to come, and I kept saying no. And then as the numbers kept stacking up, I was like, alright, maybe I should respond. And that’s a lot of connections.”

After witnessing last summer’s murder of George Floyd, Franklin began asking himself, “What does proximity look like for me?” He was used to doing the best he could with what he had down in Orange City.

“It’s kind of fascinating that this opportunity opened up not too long after asking that question,” Franklin said.

Vice President of People and Culture Cara Wald co-chaired the search with President Ross Allen, partnering with a national higher education search and evaluation company to find an individual focused on Christ, skilled in leadership and an excellent communicator.

“His unique giftings of collaboration, careful listening and genuine relationship development with and for all students and employees will advance us toward our mission in this work,” she said.

Franklin summarized his goals for Bethel in two words: “inclusive excellence,” the three areas of that excellence being scholastic, social and personal.

Franklin plans to focus his energy on four main areas, the first of which is access and equity.

“This isn’t just about the thriving of our students of color,” Franklin said. “The world will continue to change, which means we need to increase our capacities to function effectively in spaces characterized by cultural difference. And I think that speaks volumes to who God is.”

Access and equity involves not only looking at who is at Bethel, but who is able to get to Bethel.

“If Bethel is excellent, then everybody should be able to experience that excellence,” Franklin said.

The second element is learning and diversity, which Franklin aims to expand on to expose students to content by diverse speakers, authors and other educational figures.

Franklin explained that a large part of the Reformed tradition argues that “all truth is God’s truth,” meaning that exploring varying ideas and perspectives should not be looked down upon and instead be embraced, as the practice gives a more whole vision of God and His world.

The third aspect, research and scholarship, involves scientific contribution to the world.

“We can contribute to the world not only from a Christian worldview and perspective regarding our research, but we can be helping enhance and make the world a better place through using our minds and producing research and scholarship that enhances God’s redemptive work,” he said.

Diversity, equity and inclusion can connect to any field of study, he added.

The final aspect Franklin plans to focus on is a multicultural and inclusive campus climate.

“What does it feel like to be here, and what’s the climate like for people who are different than ourselves?” Franklin asked. “This is a really important question to be asking as a community.”

Franklin is beginning by looking at Bethel’s recruitment and hiring practices, making sure the candidates in question span a wide range of backgrounds and inviting people to be members of the Bethel community who can contribute their gifts to both Bethel and the greater world.

Franklin believes there is room to grow in terms of faculty, staff and student diversity.

Franklin explained that research shows random groupings of people who do not share a culture can actually have a difficult time working together. Building cultural intelligence in students can help combat this and help diverse groups live in harmony.

“Some of that starts also with changing the way that we look,” Franklin said. “If heaven is going to look and be and feel diverse, then our operations need to function in that way as well.”

Franklin wants to push the Bethel community members to love one another as brothers and sisters.

“At the end of the day, it’s about love and love is about shalom,” Franklin said,” and it’s the thriving and well being of all of creation.”