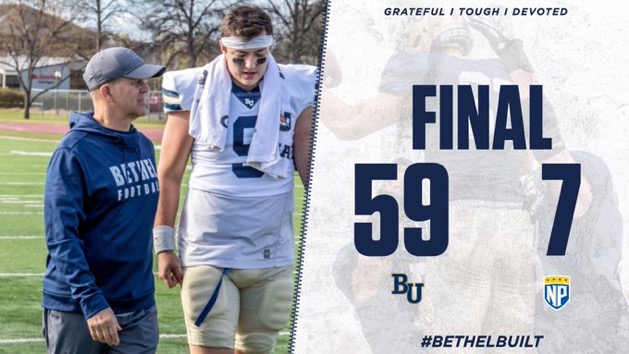 The Bethel Royals football team started the year off strong with an overwhelming victory in the Windy City.

After the MIAC conference suspended the 2020 football season due to the COVID-19 pandemic, the Bethel University football team started the 2021 season strong with a 59-7 victory over North Park University in Chicago, Illinois.

The Royals dominated on both sides of the football, racking up 417 total yards of offense while holding the Vikings to only 229 total yards. The offense ran a balanced attack as quarterback Jaran Roste threw for 169 yards and three touchdowns and the Royals combined for 244 yards on the ground, led by running back Bryce Kunkle with 80 yards. The defense was dominant, forcing both an interception in the first half and a fumble in the second half, both of which were returned for touchdowns.

In the midst of such a strong performance from the Royals in their season opener was sophomore wide receiver Joey Kidder, who made a leaping, one-handed catch on a 37 yard pass from Roste in the first quarter. The catch put the Royals in the red zone and set them up for their third touchdown of the day.

“It was a classic deep ball and I was just hoping to make a play on it,” said Kidder. “I just went for it with the one hand and next thing I knew I was reeling it in.”

Kidder followed up his highlight reel catch with a 21 yard touchdown in the second quarter, and ended the day with five catches for 84 yards in his first collegiate football game.

“Before the game I was definitely anxious,” said Kidder. “I really wanted to get out there and just get going, but I was definitely nervous just because it’s a whole new level of the sport.”

Despite some nerves leading up to the game, Kidder impressed with his performance and was a spark for the Royals on offense.

“Joey has got some great skills and feel for the game. He just gets it,” said head coach Steve Johnson. “He makes it look effortless.”

The Royals offense features four freshman wide receivers, but despite their inexperience, learning under the leadership of Roste has helped prepare them for the season to come.

“He’s been awesome. He’s been walking us through and taking it slow with us,” said Kidder. “As much as he’s been balling out, he’s also been a great leader between the younger guys and older guys.”

The Royals are back in action for the home opener at the newly renovated Royal Stadium on Sept. 11 against the University of Wisconsin-Platteville.