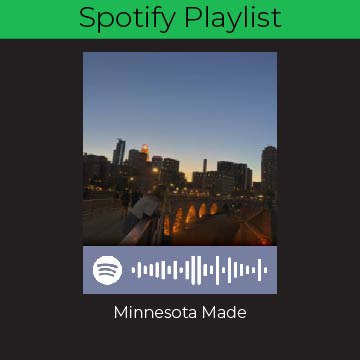 A playlist of songs made by Minnesota artists or about the wonderful state we call home to instill within you some state pride.

Girl from the North Country by Bob Dylan & Johnny Cash

Hippo Campus’ indie rock band tunes are perfect for dancing around your room at any given time of day. The fact that they are based in Minneapolis is like extra seasoning on your DC fries (aka the best thing ever).

All He Wants to Do Is Fish by the Replacements

I think that we should make this the official theme song for Minnesota boys. Why do they look more happy holding a fish than any other time in their life?

Duluth by Trampled by Turtles

Trampled by Turtles was created in Duluth, which makes this song even more epic. As they say at the end of this song, “there’s no place like home.”

OK, so Bon Iver is technically based just a short swim over the St. Croix River in Eau Claire, WI, but with Minnesota in the title I think its place in this playlist is justified. Plus, have you heard his voice? He can sing for both states.

The Wreck of the Edmund Fitzgerald by Gordon Lightfoot

Lake Superior borders much of Northern Minnesota, and that is the unfortunate resting place of the SS Edmund Fitzgerald. This song is a banger but has haunted me since I was a kid. Be careful out on the lake, folks!

This band gots its start on the University of Minnesota-Twin Cities campus in 2016, and their electrifying beats can brighten your mood any day.

Whatever It Is by Yam Haus

I speak on behalf of all students on campus last semester lucky enough to experience Yam Haus live at the spring banquet when I say that this is a band you don’t want to sleep on. One of the best live performances I have ever witnessed!

Prince is probably the most popular musical artist from Minnesota, so if I didn’t include him this list would be a complete joke.

Jeremy Messersmith is a Minneapolis based singer who gives off some of the best coffee-shop-studying vibes I have ever heard.

Waiting For The Sun by The Jayhawks

Too often, freezing Minnesota winters leave us waiting anxiously for joy to stream through the windows with the rare rays of sunlight. So right now go enjoy the summer weather! Do it!

And of course, a playlist about Minnesota artists wouldn’t be complete without a song from 2021 Bethel alum Landon Conrath. For more Minnesota-based music, check out 89.3 The Current on the radio!

0 comments on “Spotify Playlist: Minnesota made”