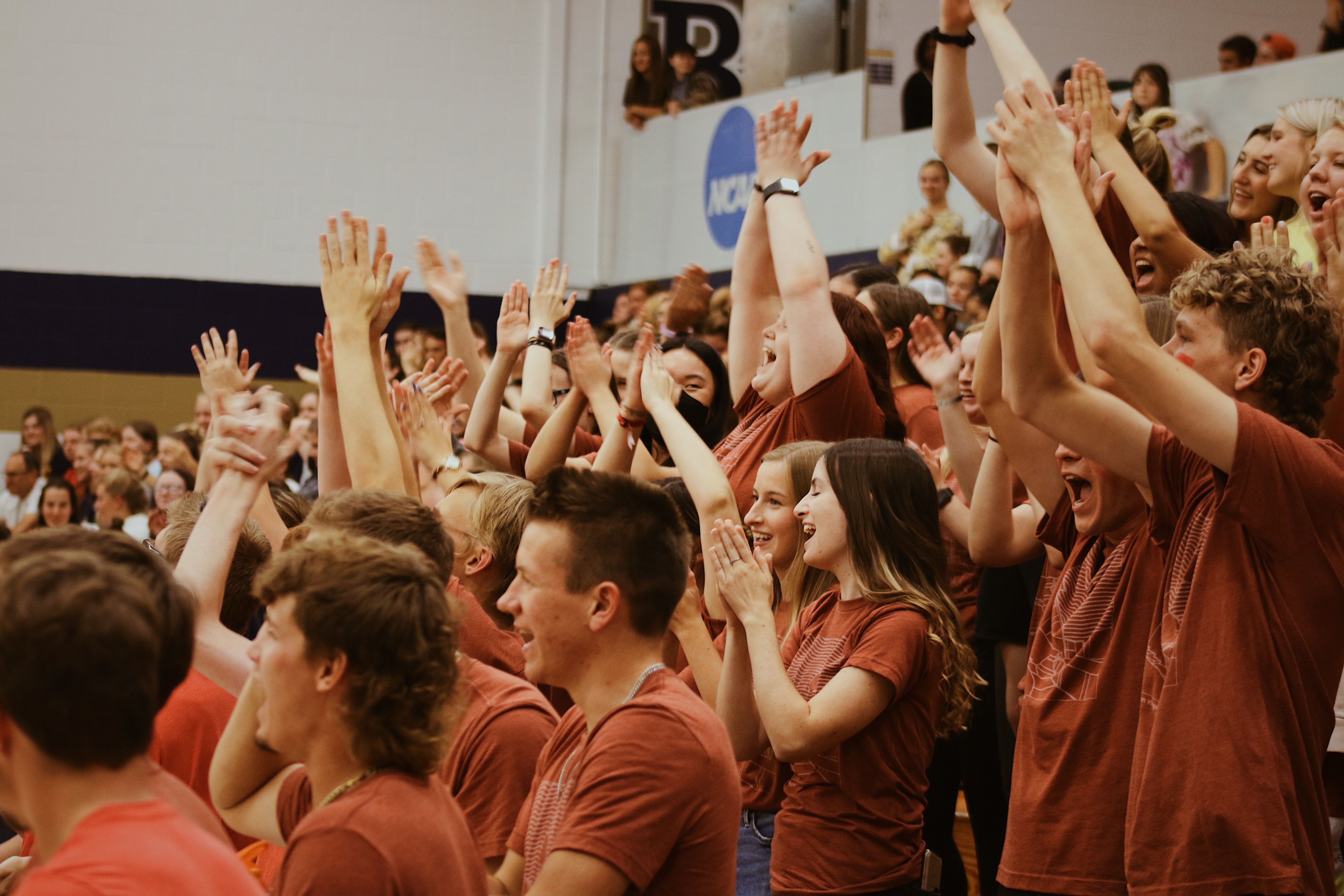 Bethel residence halls come together for a night of intense, friendly competition.

The Robertson Center gym thrummed as students filed in the double doors and found their spots in the wooden bleachers. Journey’s “Don’t Stop Believing” boomed through the speakers.

While waiting for the Men’s Dance event to begin, cheers rang out from the represented dorm halls, grouped by their matching shirts. Spectators watched and laughed as groups of students ran down from the stands to perform stunts, including a professional wrestling skit, working out with human weights and a dance-off between senior Michael Judd and President Ross Allen, which Allen won handedly by the crowd’s vote.

At 9:30 p.m., the Student Activities organizers took the floor with their microphones and introduced each hall with cringe-worthy puns. The tug of war followed the men’s dance competition. Each hall was allowed to compete with 15 girls and 15 boys. The remaining residents made themselves heard with chants and applause.

The halls heaved their way through a double-elimination style bracket, meaning a team had to be beaten twice to be eliminated. Nelson, Bodien and North Village lost both of their first two matches. Next to go were Lissner and Edgren, followed by Getsch and the Commuters.

The championship matchup was set between Arden Village and Heritage. The two halls had faced each other in the very first match of the tournament, which Heritage won, which meant its team had to beat Arden Village twice to win the championship. While Heritage stacked wins to continue their perfect record, Arden Village was fighting its way through the consolation bracket, winning five straight matches to send it to the final.

As the team members chalked up their hands, support for both halls rose from the stands. The Arden Village fans clapped over their heads as they chanted “A-V! A-V! A-V!” Heritage fans pumped their fists in the air as they cheered, “Her-i-tage! Heri-tage! Her-i-tage!” The audience was on its feet.

The air horn signaled the start of the match. Each team leaned in opposing directions. Heritage, in charcoal grey shirts, started to gain traction and the red tape around the middle of the rope inched ever closer to victory. Arden Village, wearing crimson, had no answer for the undefeated opponents, and consequently its Cinderella run was cut short by another sound of the air horn, signaling the end of the match.

Students from every hall poured out of the bleachers to jump and shout with the sweat-stained participants. Heritage: champions of the 2021 Bethel University Tug of War.

Sophomore Heritage Hall resident Sam Climaco anchored his team at the end of the rope. His strategy to tie the rope around his waist and bear-crawl toward the padded gym wall helped lead his team to victory.

“We just got in a rhythm,” Climaco said of his team’s success. “We trusted each other, and everybody knew their role.”

After having missed these activities last year due to the abnormal circumstances of COVID-19, students showed through their cheering that they were ready to come back to the excitement of homecoming events.

“[My favorite part is] being able to watch all the dorms come together and support each other,” senior commuter and Student Activities member Thomas Freed said.

He helped lead the night from the gym floor by projecting his voice through the microphone and out of the speakers.

“The energy is just electric,” he said. “It’s really what makes Bethel a community.”

0 comments on “Tug of War: Heritage Hall takes the championship”