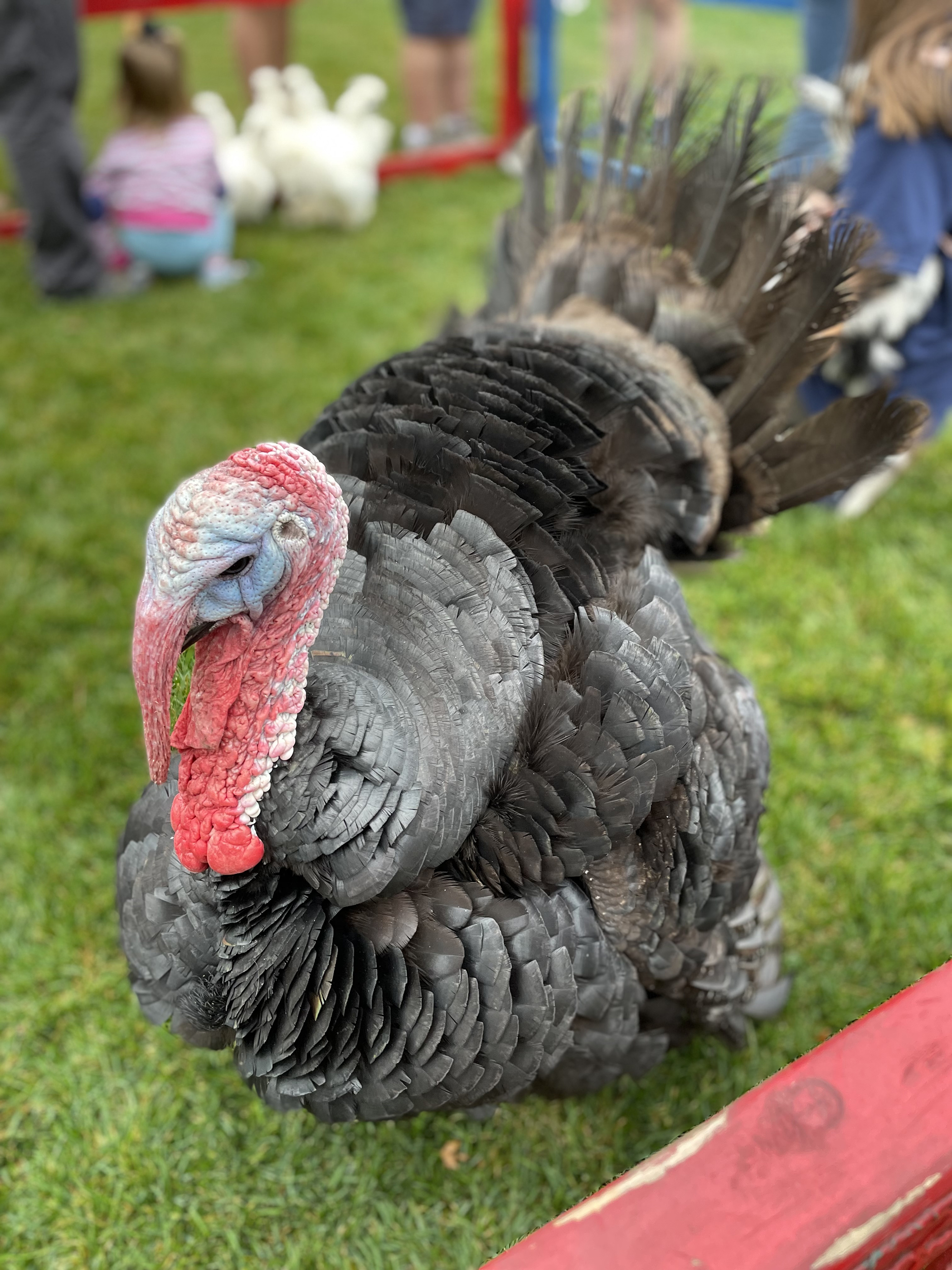 Guests at Bethel University’s homecoming enjoy themselves at a petting zoo event.

Cheryl Guyer scolded Dave the turkey with an aggressive slap and a word of discipline. He was roaming around inside the red and blue gates, asserting dominance over the softer, cuter animals that were more prone to be picked up by the guests. Cookies and Cream, the speckled twin goats, raised their heads to greet every new face that came near the gate. Monty the black and orange ball python made his rounds every few minutes, making an appearance as a new accessory on a new pair of shoulders. A soft mist descended over the plush green lawn, creating a chilly atmosphere for guests.

“Mom, can I hold one?” 3-year-old Ella asked with puppy dog eyes. She had her eyes on the snow white bunny, with a little black ring around his right eye, identical to that of a champion boxer.

Tommy’s Petting Zoo has been showcasing this odd arrangement of animals to Minnesotans of all ages since 2004. Based out of Anoka, the zoo began with one pony– a few Facebook and Craigslist searches later, Tommy purchased a pony ring.

“And then it just kept building up,” Cheryl said. Now, the zoo travels to multiple locations a day to share their love of animals, showcasing a llama, goats, alligators, and more. They made an appearance at Bethel University Saturday from 10:45 a.m. to 12:45 p.m. to welcome alumni and future generations of Bethel Royals to their homecoming festivities.

Class of 1957 alumni Bill Conrad and his wife Peggy returned to visit a campus they didn’t even recognize 64 years later. Among other events taking place around campus, they were pleasantly surprised by the strange variety of animals outside the Community Life Center.

“It was pretty neat to see,” Conrad said. The couple relayed stories about their time at Bethel, including fond memories of a Swedish janitor who Conrad befriended and helped to get his driver’s license. While at the zoo, Bill and Peggy observed the children crowding the palm-sized guinea pigs.

“I love baby things,” 4-year old Callie said while stroking the copper fur of one. She circled the perimeter, admiring the pets that Cheryl and Tommy had fostered.

“The llamas are our favorite,” said Ezra as Eden and Rosie agreed, three of the other young onlookers. “They’re funny and cute.”

“Hmmmmm-haw,” he whined. Although he didn’t have much to say, his droopy eyelids and pouted lips told all.

Despite the looming clouds, and the drizzly rain, the animals still attracted crowds of about 20 people at any given moment. The alumni that attended this past weekends’ events were pleased to see that there was entertainment available for all ages.

The animals’ charm resonated with many of the guests, but Dave the turkey was missing out. 5-year-old Ezra was enjoying himself at the zoo, but much like the other kids, he was intimidated by Dave’s hostile attitude.

0 comments on “Turkeys and bunnies and llamas, oh my: a Bethel homecoming for all ages”