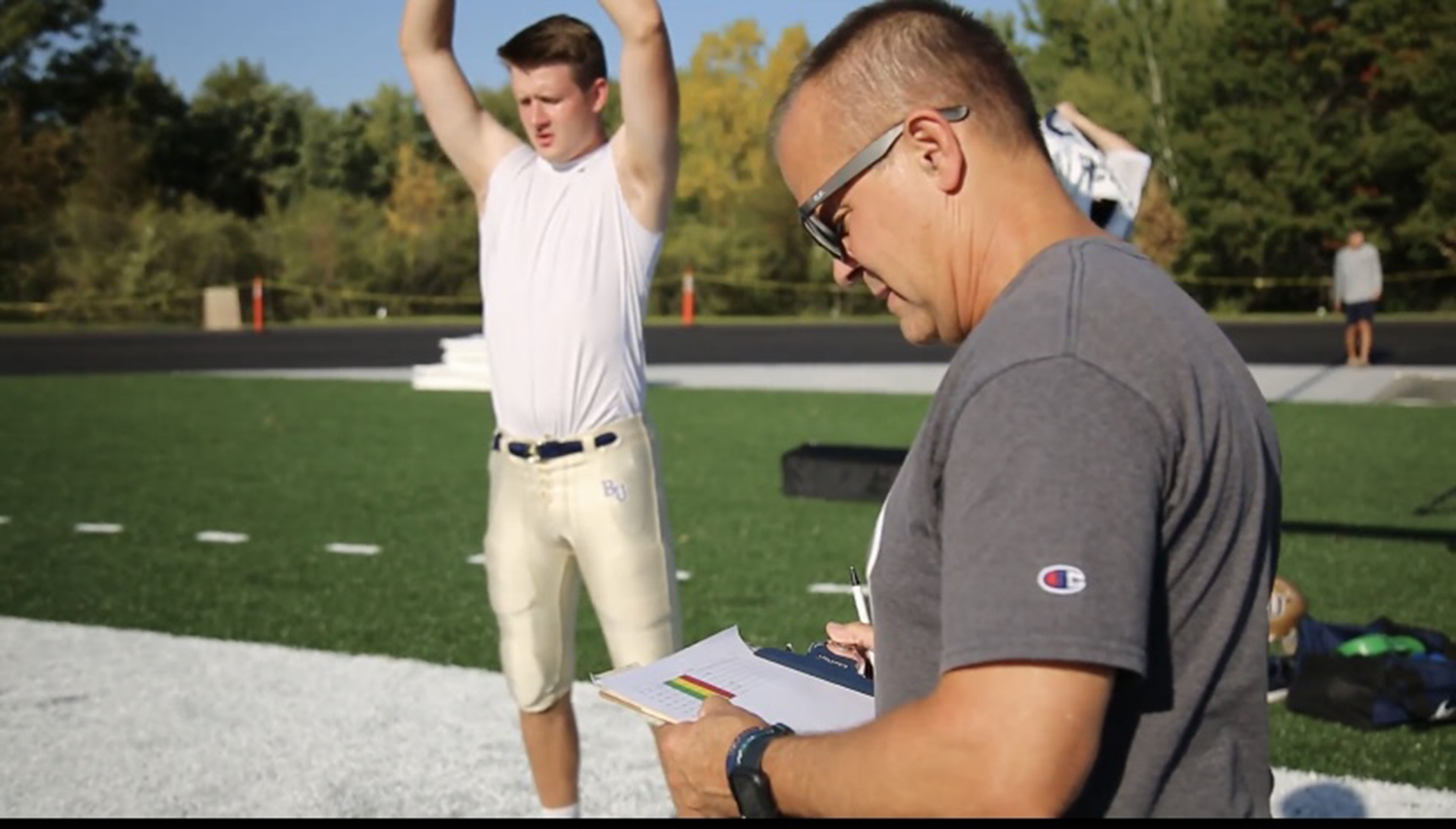 Bethel’s annual Tackle Cancer fundraiser brought community together for a cause.

The Bethel University Royals football team ran onto the field Saturday, Oct. 2 for the annual Tackle Cancer game, winning 34 to 9. Assistant Coach Larry Herm helped lead the team to victory on the field while organizing fundraising off the field. Enlisted by Herm, Bethel volleyball players passed a white bucket through crowds of white and navy blue t-shirts in the hopes of collecting money for the Randy Shaver Cancer Research and Community Fund.

“We love Larry and we love working with him. We would do anything to help serve him,” senior volleyball player Hannah Wilhite said.

Herm has led Bethel’s Tackle Cancer efforts for the past eight years because he believes men should be reminded their health is important. Herm has firsthand knowledge of the impact the Randy Shaver Cancer Research and Community Fund has had. At Bethel’s annual Tackle Cancer game, an initiative started by the Minnesota Football Coaches Association, fans can bring donations in collection pails located at the program tables throughout the game. Fans can also Venmo their donation at any time at Bethel.

Herm’s initial involvement with Tackle Cancer started when his father died of prostate and kidney cancer. Herm works alongside Dave Nelson, who works with all of Minnesota College teams in order to raise funds. For Herm, being involved in the foundation was simply a way to give back to the community. However, in the fall of 2017, Herm received life-changing news.

“I got cancer, and it became very real,” Herm said.

Herm was diagnosed with prostate cancer Aug. 17, 2017 during the first week of football practice. Not wanting to miss out, Herm had surgery to have the gland removed during the team’s bye week.

“I coached right through it. I tried to stay as normal as I could,” Herm said.

That January, during a checkup appointment, Larry got the news that the cancer had come back and spread. It was stage four.

Fall of 2018 rolled around and Herm went through radiation, but it didn’t work. Roseanne, Shaver’s wife, told Herm about the success she was having with her doctor. Suddenly, things started looking up. Herm began chemo with a port on his shoulder in the spring and into the summer at Mayo Clinic.

The radiation, chemo and the doctors that helped him only did part of the healing. Herm says prayer may have saved his life. Josh Sampson, a student at Bethel, prayed over Herm in the Monson Dining Center in 2018. Herm didn’t have hair at this point, but that didn’t matter. Sampson prayed out loud as he laid a hand on Herm.

“I’ll never, ever, ever forget that, because it was so powerful,” Herm said.

Over the years, Shaver and his foundation have raised more than $9 million across Minnesota. Herm takes pride in the money raised not for the doctor’s salary, but for equipment needed for research. On top of that, 94 cents of every dollar raised goes to cancer research and patient aid. The research money mainly travels to the hospital in Duluth, Mayo Clinic and the University of Minnesota.

“It doesn’t matter if it is an old lady in Iowa or some guy in the Twin Cities, because the goal is to reach as many people as we can,” Herm said.

Herm’s biggest lesson from his experience is that no one ever thinks it will happen to them. People get sick because they don’t go to the doctor to get checked.

“You simply don’t know what you don’t know,” Herm said. His hopes are that by sharing his story, he can bring awareness and encourage other men to get tested, saving their lives like it did his.

0 comments on “Coach Larry Herm battles more than the scoreboard”