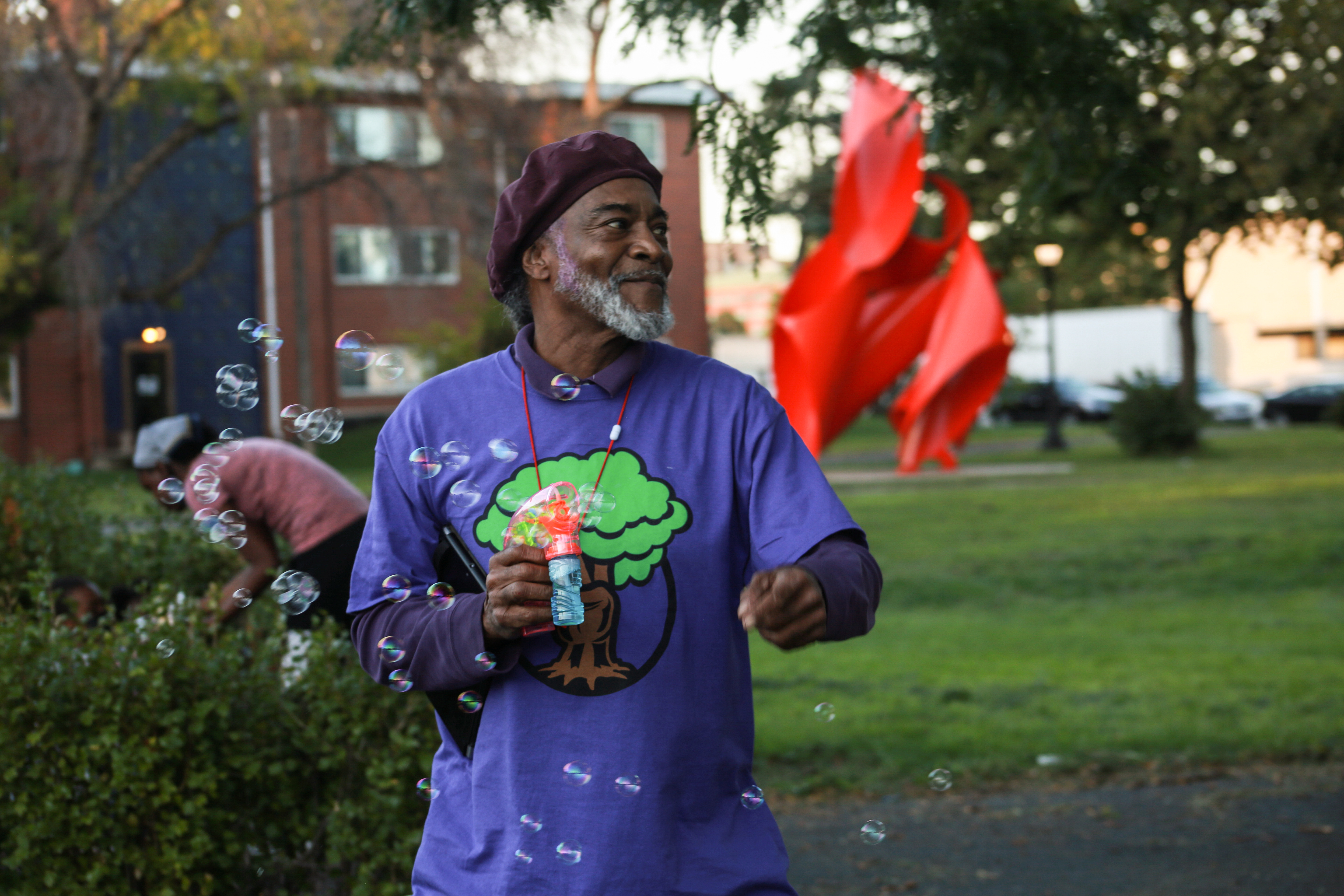 A collaborative effort between Bethel and St. Paul’s Frogtown and Summit-University neighborhoods fights for love over violence.

Armed with a pink plastic bubble gun, Melvin Giles weaves in and out of the crowd at Western Sculpture Garden, greeting both friends and strangers with a trail of bubbles in his wake. There is a live band, barbecue smoking on the grill and tables set up promoting local organizations. People from St. Paul’s Frogtown and Summit-University neighborhoods have gathered for the Harvesting Peace Community Peace Celebration. Giles, a community activist and co-facilitator of the Urban Farm and Garden Alliance, has helped plan the event in partnership with Bethel University for the past 25 years.

Since 1997, Bethel community members have worked with citizens of the FSU neighborhoods to create programs and learning experiences that benefit both communities through the Bethel/Frogtown and Summit-University Community Partnership.

Two seemingly different communities have come together to form beneficial, long-lasting and reciprocal relationships. This partnership 15 minutes southeast of Bethel has been kept alive for more than 20 years because of intentional people both on campus and in the neighborhoods.

And so every year, the peace celebrations continue. The celebration was originally created, Giles says, in response to senseless acts of violence occurring within his community. With its inception, Giles introduced the idea of “peace poles” into the neighborhoods. Peace poles are an internationally recognized symbol of peoples’ hope for a more harmonious world.The words May Peace Prevail on Earth decorate each side of the pole in different languages. English. Spanish. Arabic. Chinese.

“The peace poles and celebrations are an opportunity just to bring people together to start creating peace,” Giles said.

ComMUSICation, a local youth organization in St. Paul that hopes to close the achievement gap through community music programs, performed at the event decked out in yellow shirts.  After the seven children sang a song about love, Giles joined them in front of the crowd.

“Love can change the world!” Giles shouted above the children’s drumsticks.

Giles says love is at the core of his work in the community. It is also at the core of Bethel’s work in Frogtown and Summit-University, both racially and ethnically diverse neighborhoods in the 55104 zip code area of St. Paul. According to data from the 2018 Ramsey County Community Health Assessment, the median household income in this zip code is $52,382. African Americans make up 53% of the population, white people make up 31%, and Asian people, many of them Hmong, make up 10%. These demographics are very different from those of Bethel, where more than 80% of the population identifies as white.

A core part of the partnership is the Partnership Advisory Committee (PAC). Within the PAC, residents of the FSU neighborhood, FSU organizational leaders and Bethel community members come together to learn from each other and decide what’s best for all parties involved. The PAC builds relationships, provides opportunities for Bethel students to get involved and creates a pathway for members of the FSU neighborhoods to get involved in higher education.

Tanden Brekke serves as the main facilitator of community partnerships occurring within the FSU neighborhoods. As the Assistant Director for Service Learning and Community Engagement at Bethel, Brekke gets students involved with local organizations. Some students do so by fulfilling their work study requirement. They might work with the Rondo Community Library’s after-school program, act as a reading partner in Maxfield Elementary’s literacy program or tutor adults in English through the Hubbs Center.

Although Bethel student’s provide these services to the community, it is not a one-sided relationship. In contrast, Harley Schreck, Professor of Anthropology Emeritus and co-chair of the PAC, believes that Bethel receives far more than it gives.

“It’s just incredible, the gifts that the community has given Bethel,” Schreck said. “They really have been mentors, teachers and friends to so many students and faculty.”

These relationships are at the heart of the partnership, which is part of the reason why Brekke’s office is not housed on Bethel’s campus but in Camphor United Methodist Church, a historic church within the Summit-University neighborhood.

“Because my office is right here, we can build authentic relationships so much quicker,” Brekke said.

Being in the community allows Brekke to attend community events, relate to community members and get connected with local organizations.

Bethel has worked consistently with Giles’ UFGA, a collaboration of community gardens and backyard box gardeners that work to promote reconciliation, peace and justice through the growing and sharing of food in the FSU communities. Bethel students are able to work for UFGA, but it is more than just a service project.

“When students come to UFGA, we tell them that their assignment is to just do nothing,”  former UFGA co-facilitator and 2019 Bethel graduate Maricella Xiong said. “Just treat it as a relationship. These are peoples’ actual families, communities and lives that they’re entering into.”

From its beginning, Bethel has intended to focus on the relationships and let the positive work follow. Working with early Bethel partners, Giles reminded them to slow down and understand the various dynamics already at play in the neighborhoods. Systemic racism. Power dynamics. Infrastructure problems. But he also encouraged them to realize great things that are already happening in the neighborhood.

“We don’t want you to do charity work,” Giles said. “You need to be doing empowerment work here.”

“We don’t want you to do charity work. You need to be doing empowerment work.”

Melvin Giles, community activist and co-facilitator of the Urban Farm and Garden Alliance

Although Bethel has done empowerment work over the years, sometimes it has fallen short. In 1998 the King Family Foundation Childhood Development Center was opened out of the Ober Community Center, a building within the Summit-University neighborhood.

“The Childhood Development Center started at the Ober Center was probably one of our first big initiatives that we undertook while we were exploring some broader opportunities [within the community],” former Director of International Studies Darin Mather said.

Many families within the FSU neighborhoods relied on the center for childcare, including Mather, whose family lives one block south of University Avenue. The center was a major success of the partnership until it was unexpectedly shut down by Bethel in 2016 due to falling enrollment. The PAC was not involved in this decision-making process.

“It was really a one-sided decision based solely on finances and Bethel’s needs,” Schreck said. “It really violated the principles of the partnership.”

During the late 1950s, Interstate 94 was built right through the Rondo neighborhood, now known as the Summit-University neighborhood, of St. Paul. More than 500 homes and 300 businesses were destroyed to make room for it. Predominately white and high-income neighborhoods did not allow I-94 to be built through their homes. Rondo was given no say in the matter. One goal of the collaboration between Bethel and FSU is to break those toxic barriers down.

In 2015, former mayor of St. Paul Chris Coleman publicly addressed the city and said that the interstate that was developed, and the way it was developed, was a “sin” against the Rondo neighborhood.

“In theological language, that’s the strongest term we have to describe the harm that was done, and so there was that public acknowledgement,” Brekke said. “Now we’re in conversation of ‘Now that that happened, how do we repair that harm?’”

“Now we’re in conversation of ‘Now that that happened, how do we repair that harm?’.”

A local project championed by ReConnect Rondo, a local organization, aims to build a land bridge across I-94 to connect the two separated parts. In July, organizers of ReConnect Rondo confirmed that they had secured $6.2 million from the state to help fund their master plan. The vision is to have a large park built over the highway that allows the neighborhood to become one again. Many community members hope for the bridge to include greenhouses, a walking path and an outdoor theater. Giles even wants a lazy river.

In the end, the partnership’s vision is fueled by intentional relationships that have formed over the years when decisions are made together for the benefit of all people involved.

“It’s a really hard partnership to pull off, and the only reason it works, and when it’s worked well, is because Bethel has put aside its power,” Schreck said.

“It’s a really hard partnership to pull off, and the only reason it works, and when it’s worked well, is because Bethel has put aside its power.”

Harley Schreck, Professor of Anthropology Emeritus, Co-Chair of the PAC

0 comments on “‘May peace prevail on earth’”