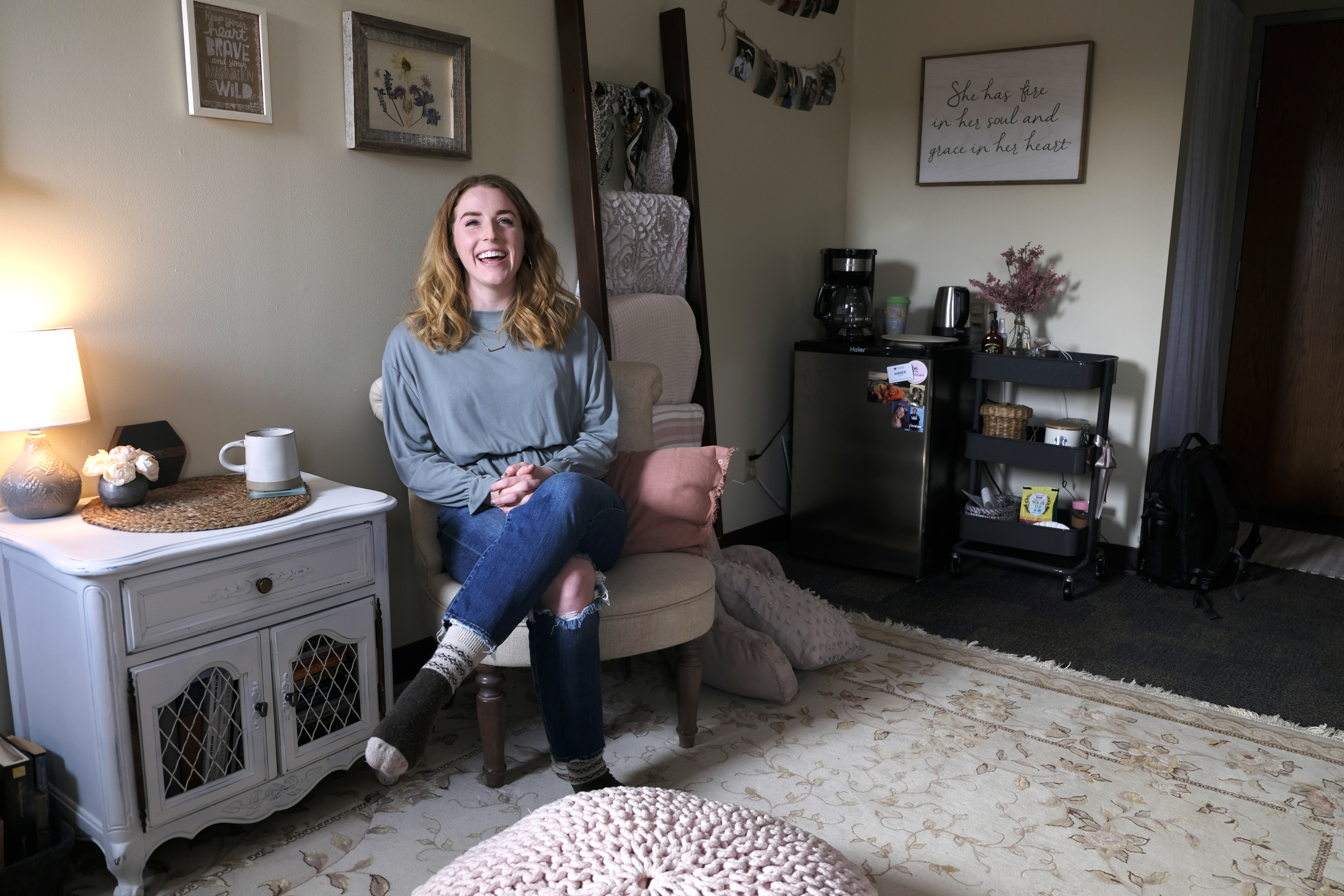 Senior Amber O’Brien stays busy while working both on and off campus jobs, all the while living out a conviction of helping others.

It gets cold in the lobby area of the small space, especially at night. Amber O’Brien wears sweatpants and a sweatshirt, doing homework on her laptop while occasionally yawning and blinking her eyes. Working the midnight to 4 a.m. shifts isn’t easy. It’s quiet, until the beep of the door scanner goes off.

Immediately shutting her laptop and shoving her personal belongings out of the way, O’Brien stands to greet the police officer and teenager as they walk down the short hallway to her. She tries to be warm and welcoming as the teen stands there while the officer fills out an informational form about the teen’s basic information. The teen keeps their head down, not being too receptive to O’Brien’s attempt at friendly conversation — but what teenager would be smiling and chatty after just getting picked up off the street for vandalism or theft?

O’Brien works at The Link Minneapolis’ Youth Connection Center Wednesdays, Thursdays and Fridays from midnight to 4 a.m., sometimes later depending on how quickly cases are wrapped up. The Link, founded in 1991 by former Minnesota Vikings football players Oscar Reed and Jim Marshall, offers many programs for the Minneapolis community. One of these programs, the YCC, serves as a safe and supervised space for youth ages 10 to 17 who have encountered law enforcement for low-level offenses.

“The program initially started as a truancy and curfew center… in 2008,” YCC Program Manager Josh Terrio said. “It’s kind of evolved… so things like runaway youth, homeless youth and other [low] status stuff like that.”

The officer finishes the paperwork and uncuffs the teen, passing them to O’Brien. As the officer leaves, O’Brien gently encourages the teen to go into one of the rooms where two couches, blankets and a TV with several DVDs lying below it await them. Taking a seat on the two couches, O’Brien starts the routine intake questionnaire about how they identify, their home situation, any disabilities and more.

Depending on each teen’s individual circumstances, O’Brien can either make a call to their parents, a shelter, a detention center or a hospital.

“If you call home, you have to say, ‘Hey, your kid was just picked up. We have them here, they are safe, but we’re not a shelter. Can you come get them?’” O’Brien said.

Sometimes parents will be there within a matter of minutes to pick up their child. Others don’t care.

“Some parents have said, ‘I don’t want my kid, I don’t care what you do with them.’ And then they hang up,” O’Brien said.

When home isn’t an option because of a lack of safety and security, Child Protective Services must be called. Those are the extreme cases – the cases O’Brien hopes she never has to deal with.

Growing up, she looked up to her mom, Kristi O’Brien, and was inspired by her work and attitude. Kristi worked in elementary schools in Rosemount, Minnesota as a paraprofessional for students with disabilities at the same time O’Brien went through kindergarten to fifth grade. Through helping students with daily in-class activities and assignments, O’Brien saw her mom as a great influence.

“I think from an early age, seeing the [act of helping] is important,” O’Brien said. “There are people that are otherwise ignored if somebody doesn’t say, ‘I want to help,’ and I think this instilled in me the idea that this is what [I] am called to do.”

When it came time to decide on a college and a major, O’Brien simply followed in the footsteps of her two older sisters, Allie and Amanda, majoring in nursing. After her first day of classes, she changed her major.

Originally wanting to be a nurse practitioner, she realized that she didn’t have to go down the traditional nursing route in order to work with the mind, so she switched her majors to psychology and neuroscience.

“I realized … I can just get right into it by doing psychology,” O’Brien said. “I’m where I’m meant to be and I’m learning what I am meant to learn.”

While a psychology degree teaches her the how of counseling, neuroscience helps to answer the why.

“Neuroscience offers that scientific background of … [understanding] maybe what happened in your past, but … on a biological level,” O’Brien said.

She had always known she wanted to work in trauma counseling, specifically with children who have experienced trauma.

“I love that stage of life, I love the hope that that stage … holds,” O’Brien said. “[A child] is still being shaped and molded. It’s such an encouraging time in someone’s life.”

Wanting to work in counseling for the purpose of forming connections and seeing progress being made is one of the reasons she loves working with the BUILD program on Bethel’s campus. After attending an on-campus job fair, she stumbled upon the BUILD department and was soon hooked. She worked her freshman and sophomore years as a classroom mentor for students before becoming a housing mentor in Bodien Hall her junior year. Now in her senior year, she serves as Assistant Residential Supervisor in Nelson Hall — a role which she says is similar to that of an Assistant Resident Director.

Residential Supervisor allows her to step into a leadership role that she has not experienced as a classroom and housing mentor.

“I went from being with [BUILD students] for one hour a day in a classroom setting to with them all the time, helping them through life and having really real conversations” O’Brien said. “It’s so beautiful.”

Unlike a housing mentor, O’Brien is never “on duty” in her current role. Instead, she’s “on call,” meaning that any phone call made to the BUILD office will be directed to her cell phone. Calls can range from an emergency or mental health situation to asking what the Dining Center is serving for dinner one night.

Monday nights, she coaches basketball for about 25 BUILD students.

Now an official club, United Sports, the Robertson Center Gym is reserved for BUILD students and mentors on Mondays. The gym fills with the sounds of sneakers squeaking and balls thumping on the floor as students form two lines to work on scrimmaging and free throws. Laughs and “nice tries” echo off the brick walls as students tease each other for a missed layup but then offer high fives or hugs of encouragement. O’Brien stands in the middle of the two lines, whistle in one hand, as she cheers everyone one and does little dances of victory when someone makes a basket.

“I’m not very good [at basketball],” O’Brien said with a laugh, “but I try to be supportive and cheery.”

O’Brien loves attending the events that other housing mentors in Nelson host and tries her best to go to all of them, but something she’s recently had to learn is allowing herself to say no to some events.

“I think I’m becoming really self aware,” O’Brien said. “I’m not afraid to take time for myself.”

One of the ways she takes time for herself is teaching yoga classes in the Wellness Center. Getting certified as a yoga instructor had always been something she’d wanted to do, so last summer, she finally got it done. Leading yoga classes three times a week has become something she looks forward to among her busy schedule and has allowed her to form meaningful relationships with attendees.

But O’Brien recognizes that one cannot survive on yoga alone. She makes sure to be intentional about checking in with herself and resting when she needs it — especially after the night shifts at YCC.

“Seeing the situations that come in are absolutely heartbreaking,” O’Brien said. “I’ve had nights where I come back and go to sleep right away and I wake up and I cry… I don’t even try to process the night of.”

Having to go to a 9 a.m. class the morning after a shift at YCC is the time when O’Brien finally processes the night before. It’s something that makes her realize how protected and privileged her life is.

“How can I be sitting here about to take a quiz or talk about physics when I know the situation that [a] youth is in?” O’Brien said.

There are some days O’Brien says that she can’t cope and simply has to accept the situation. Legally, she can’t reach out on her own to a youth and help them in any way, but she does what she can by praying for them and treating them with kindness.

“I think… in these situations, [a youth] does not see a lot of people who are saying ‘you’re important and you’re more than what you’re going through,’” O’Brien said.

While The Link and YCC are not Christian-affiliated organizations, O’Brien believes that her own faith impacts why she works and why she loves what she does.

“Jesus loves all these people that society [casts out]. He loves this person so much, and most of the world says, ‘Who cares?’” O’Brien said. “That has been such a reminder to me to be like Jesus in that way.”

Sitting in the cold lobby awaiting the arrival of a police officer and teenager isn’t a dreadful midnight activity — it’s another way for O’Brien to live out her calling of helping those who need it.

“These kids who have had a hard time, who’s gonna help them if somebody doesn’t step up?” O’Brien said. “I’m at a place where I feel like I’m ready to go out and do something about it… if you don’t do it, who will?”