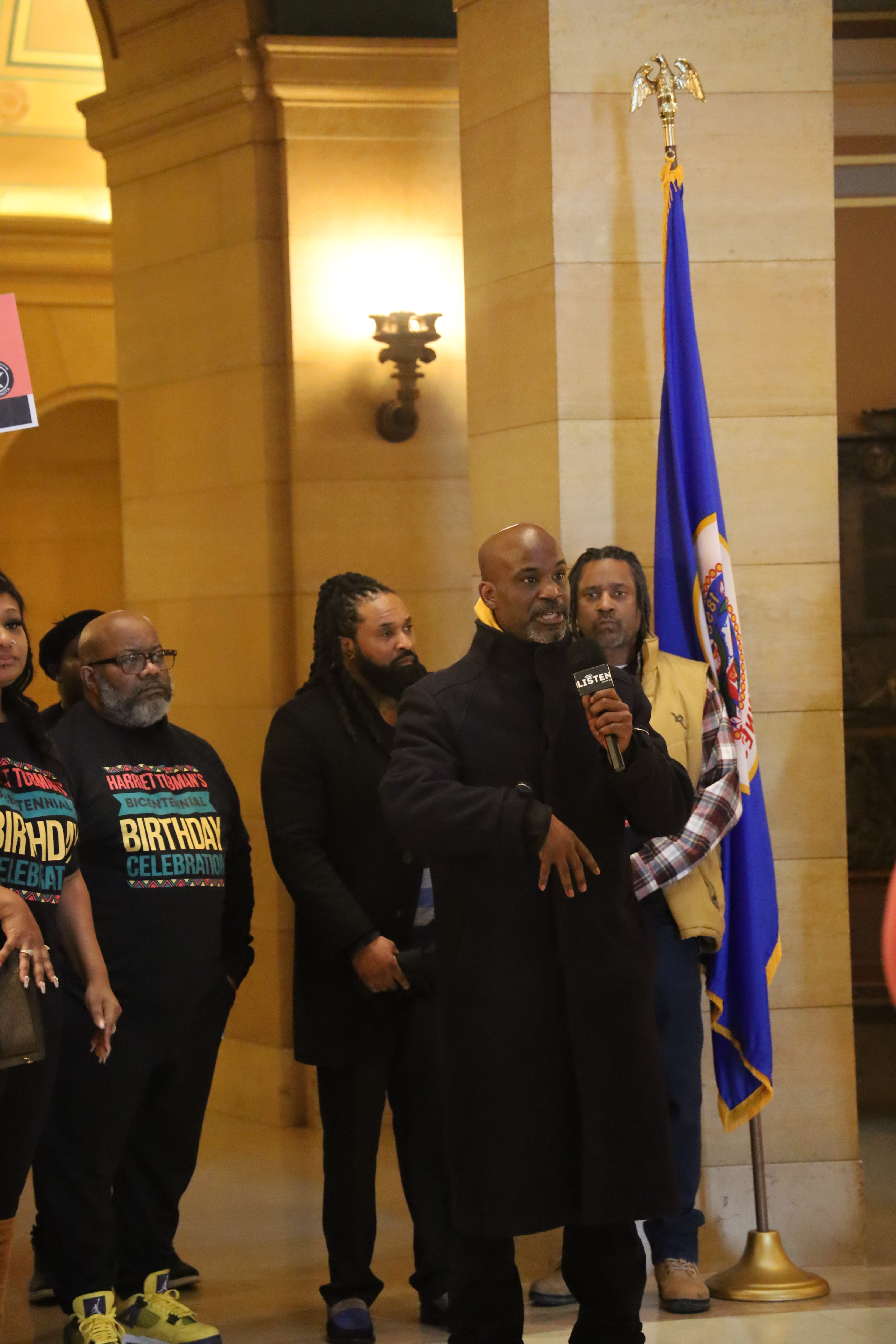 Diameshia Ford sat in her seventh grade geometry class, looking around the room. All white faces. Hers was the only one darker than the rest. She stared at her worksheet, unable to figure out the problem staring back at her. Math had always been hard for her, but determined to solve this problem, she walked up to the teacher’s desk to ask for help.

Her classmates had been going up to ask for the whole hour. But when Ford did, she was met with an eye roll.

“Your people just struggle with this kind of thing,” the teacher said.

Ford felt her cheeks grow warm. She wanted to shout back at him. She wanted to ask why she was being written off while other students were given help. But she didn’t. She couldn’t feed into the angry, loud Black girl stereotype.

She felt herself growing more angry, more frustrated, and stepped into the hallway to calm herself down. The teacher followed her, screaming, yelling, but Ford heard none of it. All she saw were the faces of her peers gawking.

Growing up in St. Paul, Ford knew her race affected all things in her life. Her teacher and classmates didn’t know she grew up in a single-parent household on the outskirts of St. Paul with three other siblings. Ford grew up in the lower-middle class, and even from a young age, she recognized that her race and class seemed intertwined somehow.

“I wasn’t provided the same resources that other people may have,” Ford said.

Ford’s story mimics the reality statistics clearly show. In St. Paul, the median amount of money a Black family typically makes is only 47.4% of what a white family makes. In the next two years, that number is expected to drop to 45.9%, according to U.S. census data.

In response to these numbers, advocates within St. Paul decided it was time to do something.

The city council passed the St. Paul Recovery Act Jan. 13, 2021, which is a resolution formally apologizing for the city’s participation in African American slavery and systemic oppression while also promising to find a way to pay reparations to the descendants of African American slaves.

For Ford, now a sophomore business major at Bethel, this seems like one small way that racial equity can be built.

Bethel freshman and communication studies major Camile Bunker also believes this promise to pursue reparations could be a step in the right direction. Living in the heart of the Rondo neighborhood, St. Paul’s historic hub for the Black community, Bunker has watched her community struggle to find its footing. After the expansion of Interstate 94 into this area of St. Paul in the 1960s, the thriving African American community was destroyed and some 500 Black families and 300 businesses were displaced, according to census data.

Bunker believes this effort is the start of something, but she’s skeptical of how it works and if it will stick. She’s watching her own neighborhood in Rondo “be gentrified,” with young white couples outbidding Black families who simply don’t have the same means to compete financially. She is wary of the idea that a check from the government will fix everything, particularly the attitudes that others have toward her. Bunker suggests money for reparations be directed to longer-term initiatives, such as job training seminars for under-qualified African Americans or more scholarship funds set up for descendants of American slaves. To Bunker, these initiatives are the ones that will have the most impact.

“I don’t want people of other races to see this as a handout,” Bunker said. “This is not just to make amends. It’s to make change.”

The act itself formally apologized for Minnesota’s complicit participation in the oppression of African Americans since the inception of its statehood. It also established the creation of the Reparations Legislative Advisory Committee, a special subcommittee of selected community members who are tasked with creating an outline on how the next, more permanent commission should operate. The permanent commission will determine how to go about the actual paying of reparations to the descendants of former African American slaves living within St. Paul and will be created this upcoming summer after the Legislative Advisory Committee disbands.

Trahern Crews, founder of Black Lives Matter Minnesota, has been advocating for reparations for years and serves as the co-chair for the committee. He’s convinced that reparations are not only owed to the Black people of America, but will actually be beneficial for the betterment of the whole country.

Crews points out that while Minnesota was technically a free state in 1858, many rich white southerners would bring their slaves up to Minnesota when vacationing in the summer. When slavery was abolished nationwide in 1865, slave owners were given monetary reparations for their “property losses,” but the newly freed slaves were turned onto the streets with next to nothing. This reality in addition to harsh oppression built a foundation for poverty.

More than 150 years later, St. Paul still sees the effects of this original disparity. The difference in generational wealth between white and Black families in St. Paul is the primary cause of the racial wealth gap, and it’s rooted in housing. Post-civil war practices such as redlining and racial covenants prevented African Americans from attaining homes that could accrue much value, as they were subjugated to areas that were deemed less valuable by the white officials in power. Less value in a house means less generational wealth to pass on, thus stagnating (or in some cases, decreasing) the wealth of these families.

White families have not historically faced the same issue, allowing many more of them to accrue this generational wealth. Over time, the gap in wealth between whites and Blacks has only grown. In the Twin Cities as a whole, only about two out of every 10 Black families are homeowners, compared to seven out of 10 white families.

The racial wealth gap is what motivated Crews to use his voice to speak out about Black reparations. He argues that his request isn’t one that’s far-fetched. Japanese Americans who were placed in internment camps in the U.S. during WWII were each paid $20,000 (equivalent to $44,000 in today’s money). Germany’s government paid similar reparations to Holocaust survivors after WWII.

Councilmember Jane Prince has been a huge supporter of reparations, working closely with Crews for a number of years to get the issue on the political agenda of St. Paul. Though white herself, Prince thinks this issue is of high importance to the residents of St. Paul, which is 45% people of color with Black residents making up 15% of the total population.

“I think once people really acquaint themselves with our history, it’s kind of a no brainer,” Prince said.

St. Paul isn’t the first U.S. city to pay slavery reparations. Leaders are learning from Evanston, Illinois, the home of Northwestern University, which just tackled the issue this past summer by issuing their first reparation payments, but Crews believes there is a tangible energy in St. Paul around it now. Even though reparations aren’t a new idea, he says the conditions are ripe for it to finally gain traction. After the death of George Floyd in May 2020, Crews says there has been more talk in Minnesota’s local and state government about reparations.

“America has had its knee on our neck for a long time. Only this time, it was on film,” Crews said.

As with any resolution of this size, many details need to be ironed out before the Black residents of St. Paul receive any form of money. Crews’ committee is still debating what this will look like. In the beginning phase of the work, Crews and his committee members sent out surveys to residents looking for community feedback on how reparations should be handled. They also went to every Black-owned business in St. Paul to ask for face-to-face responses about how reparations should be instituted in order to drive the best benefit. Using all of this information, the Reparations Legislative Advisory Committee created a report outlining the laws and scope that the permanent commission will have. Crews plans to sit on this board as well, saying he wants to see the whole process through to the end.

The committee presented its report to the city council Feb. 17. It passed unanimously.

Crews says the funding is already there – at least at the federal level. He points to the trillions of dollars of stimulus packages that were paid to those unemployed during the height of the COVID-19 pandemic. In the Minnesota state government, there’s a projected surplus of $9.25 billion. Some of this money could also be allocated to reparations, he said.

At Bethel, inside the Cultural Connection Center, Ford and Bunker talk of the possibilities of the St. Paul Recovery Act. Reparations could look like more scholarship opportunities for people who share their skin color. It could take the form of cash payments. It could be a turning point for righting wrongs, or it could be another empty promise that fizzles out through bureaucracy. While Crews and Prince fight actively for this inside the government, Bunker and Ford think of what change could mean on Bethel’s campus.

“This doesn’t just affect one person or a group of people. It affects everyone,” Ford said. “ I feel like it’s really important for people to know about but also to really care about.”