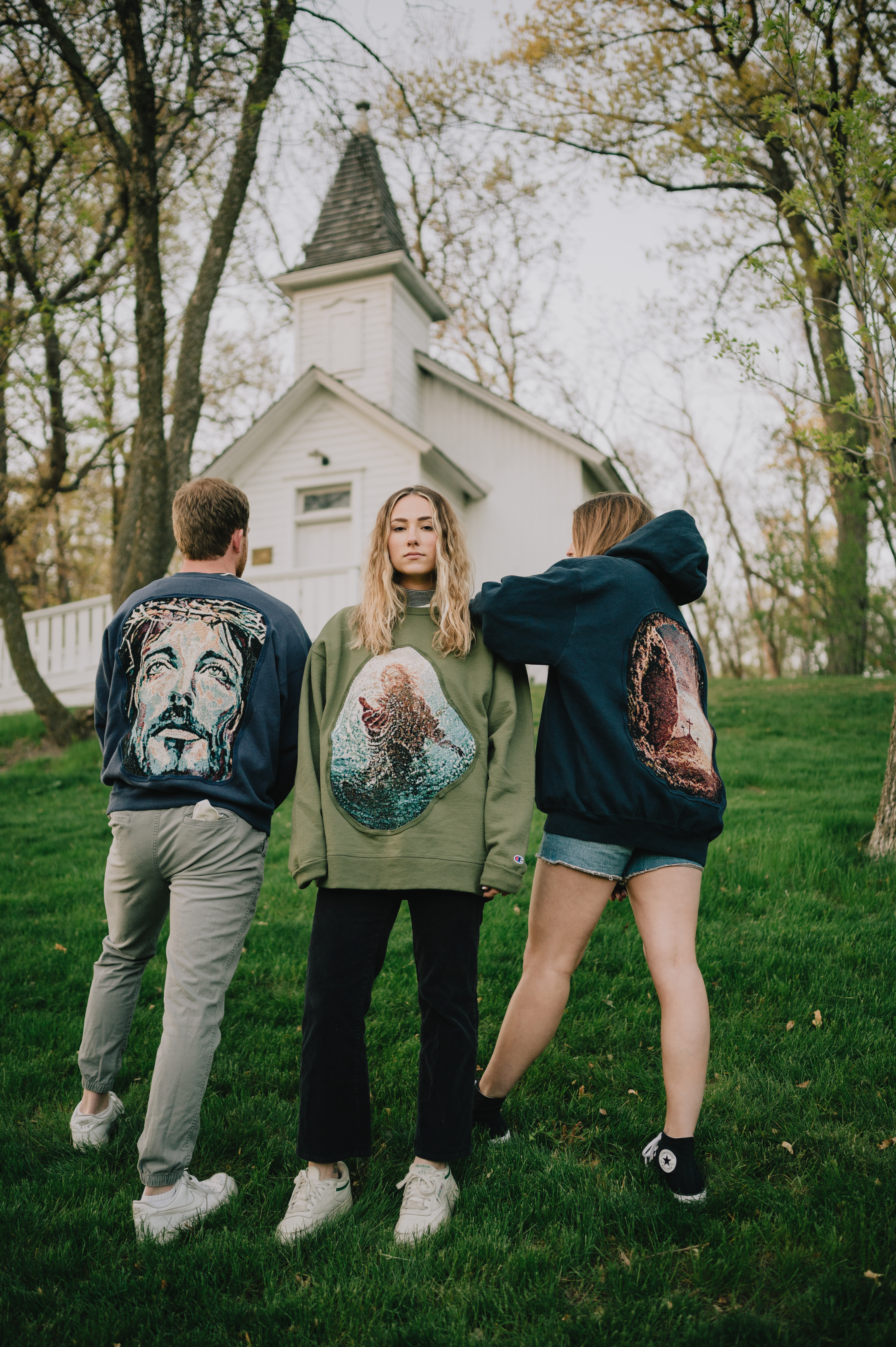 Bethel alumni created Kingdom Clothing based on the motto of “kingdom first and people second.”

The vintage clothing industry has captivated the hearts and minds of young Minnesota natives who are looking to add on-trend apparel to their wardrobes. Three Bethel University alumni, Peyton Gallagher ‘21, Alex Hunter ‘16 and AJ Barrett ‘21, along with Hopkins High School senior Sam Gausmann, have taken a community-centered approach to this fashion trend. The team of four owns and operates a vintage clothing company, Kingdom Clothing, which sells vintage items from the 1970s to 2000s and champions a community rooted in “belonging, connectivity and love.”

When Kingdom Clothing’s main founder, Gallagher, wrote the words “Kingdom Clothing ” in his journal in April 2020, he had no idea that one day the brand would carry six different collections of vintage clothing and serve as a bridge for Gospel-centered conversations. From the brand’s frequent pop-up shops and its offerings of vintage apparel within the themes of sports, college, nature and music, it has garnered significant support from the Bethel community.

“Kingdom Clothing would not have started if we hadn’t all been … in some way, shape or form connected by Bethel,” Gallagher said.

Gallagher began attending Bethel in 2017, majoring in business marketing and minoring in biblical and theological studies. During his freshman and sophomore years, Gallagher also began a side hustle of selling Lululemon, Patagonia and other popular brands on Poshmark and eBay.

Gallagher’s thrifting business expanded during his junior year of college in 2019 when he joined forces with two other Bethel students: Levi Scott and Max Janes, who also had experience reselling clothes. When the pandemic sent Bethel students home for the school year in March 2020, Gallagher found free time to contemplate the future of his reselling side hustle.

“I was in my bedroom one day, and was just like… What do I want to do?” Gallagher said. “I was just praying through, like, alright, what if we made this a business?”

Kingdom Clothing was officially established April 19, 2020. Gallagher, Janes and Scott gathered at Janes’ garage in the summer and encouraged people to drop off any clothing donations. For the first month, Scott played a major role in the company’s beginning stage but then decided to leave Kingdom Clothing and pursue endeavors elsewhere.

Later in the summer, Gallagher began working at PULSE Movement, an evangelical non-profit, as a preaching and church relations intern. At PULSE, he met his supervisor, Hunter, and became close friends with the photography intern, Barret.

Throughout the PULSE internship, Hunter began expressing support for Kingdom Clothing. Somewhere between April and July of 2020, Gallagher recalls taking hold of the vintage clothing trend and transitioned to selling primarily vintage clothing. Hunter joined Kingdom Clothing during the summer, with AJ officially joining the team in August 2021.

Selecting a “timeless font that had a wear and tear similar to vintage clothing” and a crown that represented “righteousness and right standing with God,” Hunter created Kingdom Clothing’s distinct logo and other branding work.

The first Kingdom Clothing pop-up shop took place in July 2020. Gallagher remembers making around $3,000 dollars. Being “blown away by the outcome,” Gallagher ordered pizza and played basketball in the backyard to celebrate.

Kingdom Clothing hosted their second pop-up event in August 2020 in one of their friend’s garages in Arden Hills, which exceeded their expectations and sold $10,000 worth of clothes.

“At the very beginning when we started, we focused more on operating like a business, developing a brand, identifying our markets and giving it a family feel,” Hunter said. “And since then, [we have been] saying the phrase ‘kingdom before clothing.’”

Janes was Gallagher’s “main partner,” leading social media and doing other daily work until he left. There is a whole community of individuals who played an instrumental role in Kingdom Clothing’s growth, including Hunter’s wife, Carlee, who started the “Rework collection” and Christi Waldo, who has helped with social media graphics since October 2021.

Kingdom Clothing soon transitioned its pop-ups from home garages to more professional spaces in downtown Minneapolis. A highlight of Kingdom Clothing pop-up shops was their free professional photoshoots led by Barrett, which built upon its commitment to building community. Brand supporter and photographer Marissa Zepecki filled in for the pop-up photoshoots when Barrett wasn’t available.

“My favorite memory at a pop-up shop recently was being able to have a mini photoshoot with my friends to create content [for] all the Kingdom Clothing merchandise for postings,” senior Alex Lewandowski said.

The wide-spread Kingdom Clothing community has placed Gallagher and Hunter in a position to live out their faith and build the kingdom of God. Hunter said that Kingdom Clothing has the opportunity to “be a light in an area that really is unchurched, unreached and unloved.”

“We are in a season and an age where we need to meet people where they are at and vintage clothing has been just this beautiful open door to this brand new community that I had no idea even was around in the Twin Cities,” Hunter said.

In the summer of 2021, Hunter and Gallagher’s full-time ministry roles escalated and led them to hire Gaussman in September, who previously owned a vintage clothing company called “Vintage Klothing.”

Today, Kingdom Clothing has shipped to every state in the U.S., grown to have over 25,000 Instagram followers and releases 100 to 150 new items on its website every week.

Gallagher believes that Kingdom Clothing will be around for “as long as a community continues to engage with it.” Kingdom Clothing hopes to remain strongly connected to its roots at Bethel, where it originally began, and their motto of “Kingdom first, people second” will continue to guide their business practices.