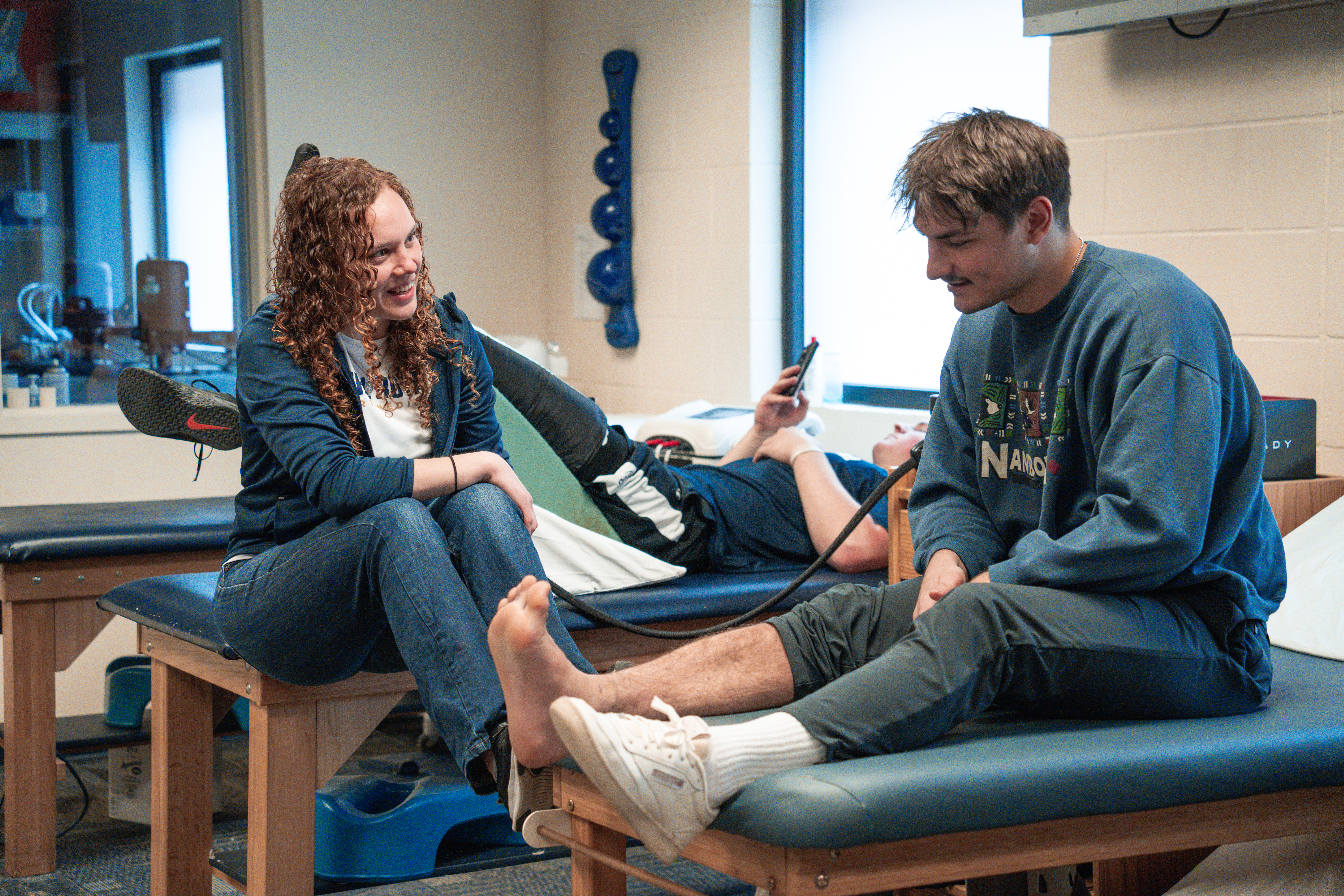 Athletic trainers at Bethel discuss the joys and challenges of caring for student athletes in ways beyond just the physical realm.

Annie Hinnenkamp laid on her pillow, wide awake. Her eyes still stung from the lack of sleep. How many days has it been now? Three, maybe four? They’ve been blurring together. 80-some-odd hours ago, she got a call from one of her athletes telling her he had just attempted suicide. He wasn’t sure why calling his athletic trainer felt like the right thing to do, but it did. After that night, he didn’t return her calls for four days.

Finally, the phone rang with his name appearing on the caller ID.

“I just needed some time away,” he told Hinnenkamp.

She gets it, she really does. She’s a little angry, sure, because he didn’t let her know he was OK. But more than anything, she’s overwhelmed with relief.

Hinnenkamp, who treats men’s soccer and men’s hockey athletes at Bethel, didn’t imagine talking someone off the ledge when she decided to become an athletic trainer. She also didn’t imagine falling in love with teaching only to have it pulled from underneath her. She certainly didn’t imagine doubling her hours at work due to a major pandemic.

And yet, these are all the realities of the athletic trainers at Bethel. Despite having five trainers on staff, the second-most in the Minnesota Intercollegiate Athletic Conference, the issues that trainers deal with behind the scenes contribute to rapid burnout. And though the national trends in burnout among athletic trainers would suggest this, it looks like Bethel’s trainers are an exception, with very low turnover rates.

The field of athletic training conjures up many familiar images to most who’ve been around sports: taping ankles, administering rehab exercises and giving emergency care should an athlete require it during competition. But according to Hinnenkamp, this is only half of her job. The other half, and more important half to her, is building relationships with the athletes.

“If my athletes don’t leave my care knowing that they’re loved and that they matter, then I didn’t succeed as an athletic trainer,” Hinnenkamp said.

While most trainers share these sentiments, it’s typically not enough to run on. One comprehensive analysis done by the job site Zippia found that 58% of athletic trainers did not hold their current position for more than two years before looking elsewhere for employment. Turnover is a critical issue in the athletic training world, as the long hours, average pay and high stress cause many to feel burnt out.

And yet, Bethel’s trainers all seem to defy this. Though exact data is hard to pin down, Director of Athletic Training at Bethel Justin Byers feels that athletic trainers at Bethel seem to stay longer than other institutions. To him, there is an obvious reason for this: trainers are appreciated at Bethel.

Byers has been treating athletes at Bethel for the past 18 years. Prior to Bethel, he worked in professional sports, where he says he was used to being underappreciated. Though he feels his job is essential to a team’s success, it often goes unnoticed in the larger sports world. Byers says the situation at Bethel is unique in that the athletes are much kinder and understanding than any he’s encountered before. According to him, it’s the reason why the turnover rate at Bethel is so low.

“It’s very rare that I ever feel underappreciated at a place like this,” Byers said.

One reason that both Byers and Hinnenkamp loved the job before 2020 was because they got to teach their trade to wide-eyed, bushy-tailed students who were just as passionate as they were about caring for athletes. Bethel instituted a “3+2” program in 2017, and it looked promising despite low enrollment in the initial years. The program allowed students to receive their Bachelor’s of Science as well as their Master’s in Athletic Training in five years instead of six, and it was the only program of its kind in the Twin Cities.

But when it came to making budget cuts in spring 2020, the athletic training program was one of the first to go. After only a few years of running, the 3+2 AT program was cut, and the students within the program were forced to find other options.

“Our contracts ended up changing…so I wasn’t allowed to teach anymore, which was frustrating,” Hinnenkamp said. “I loved teaching.”

The contracts, which originally described job duties as being split between caring for athletes and teaching within the program, were rewritten so training was now the full-time focus.

But perhaps it was a blessing in disguise, as soon after, COVID-19 flipped their jobs upside down again.

In order for athletics to happen in the past year, trainers became the main people who monitored any kind of sickness on all teams, particularly COVID-19. This meant quarantining athletes, asking for close contacts and prohibiting participation due to NCAA required “return-to-play” protocols.

“COVID was hands down the hardest,” Hinnenkamp said. “It added a layer of frustration because now the athletic trainer became the bad guy.”

Though trainers hate telling players they can’t play due to injury or sickness, both Hinnenkamp and Byers acknowledge that it’s a necessary part of the job and ultimately in the best interest of the athlete and team as a whole. COVID-19 exacerbated this with outbreaks coursing through winter sports this past season. This meant that trainers not only had to “act as the villian” by prohibiting play, but it also added a few hours onto their already long days. Hinnenkamp says during hockey season, it was common for her to work 17 hour days.

She admits that this did cause her to feel burnt out at times. Without having any time for herself to decompress, it was tough to keep going. And yet, she was able to see the light at the end of the tunnel. As of April 13, the NCAA greatly loosened COVID-19 related protocols, including ending mandatory testing for unvaccinated athletes. This, combined with winter seasons coming to a close, was the break Hinnenkamp needed.

“Burnout comes from working long hours,” Hinnenkamp said. “My burnout doesn’t change that I still love what I do.”

In the training room, it’s an hour before practices start. The room houses eight examination tables but is filled with many more people than that. Hinnenkamp works on a men’s hockey player while Byers laughs with a football player who is rocking on a foam roller. Other trainers scatter around the training room getting their athletes ready for practice. There is a vibrant chatter in the air as athletes from different sports catch up while preparing their bodies to train. In that room, bodies are cared for and camaraderie is built.

“I fully believe I have the best job in the world,” Hinnenkamp said.

0 comments on “More than taping ankles”