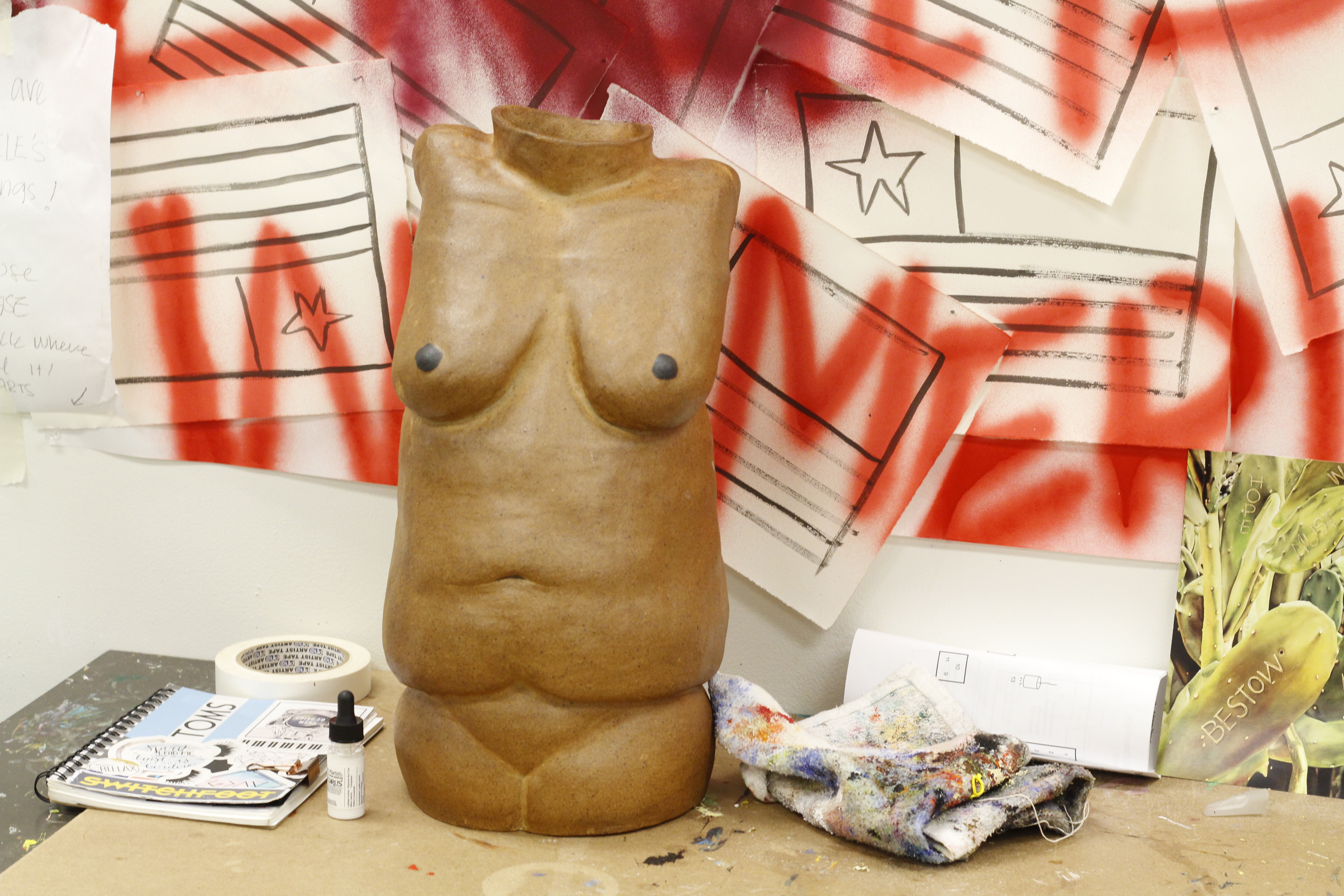 Since its first showing in 1973, Bethel’s annual student art exhibition Raspberry Monday has kept many traditions consistent. For one, the juried showcase remains open to all art students, allowing them to enter paintings, sculpture, digital media, photography and more for judging. The Johnson Gallery, where this year’s art was held from March 28 to April 13, has always been the home base for the student exhibition. And the event’s eccentric title remains a nod to Don and Florence Johnson, the couple who donated money for the first Raspberry Monday Scholarship Award after surviving a car accident. When they crashed, the Johnsons had been on their way back from picking raspberries. After the impact, they were relieved to realize the red substance covering them was berries and not blood, making the event’s title recognition of God’s protection.

In its 49th year, Raspberry Monday has seen changes that challenge its tradition. After COVID-19, students continue to submit their work virtually. This year’s juror, Alison Hiltner, judged student work through digital photos instead of walking the wooden gallery floors. Gallery Director and Professor of Art Michelle Westmark Wingard believes judging will stay this way for the foreseeable future.

“Jurors are able to look at the work and really consider it for longer than a three-hour judging window,” Wingard said. “I think it’s kind of a nice thing.”

This year’s show saw 135 submissions from 35 students. In the midst of choosing between art pieces, Hiltner, for the first time in the show’s history, listed four honorable mentions as opposed to the usual one. Among these submissions, many students sought to reject traditions handed down to them by society.

Senior art major Gissele Olivares’ pottery was displayed in the Johnson Gallery with unglazed burn marks from the kiln freckling the surface.

One of the pieces, “Unbroken,” was based around the post-mastectomy body of a woman with breast cancer, playing with the idea of loving the body even when it betrays. Her other pottery piece, “Acceptance,” is modeled after her own body. Both of these pieces had the same imperfect, brown and freckled finish. “Acceptance” was originally drawn with wings wrapping around it in the planning sketches. Although the wings did not make it onto the final product, Olivares does not consider it a failure. She believes it is glorious even without.

“A lot of the art history classes you take are Renaissance art, so it’s all of these women that… are meant to be perfect,” Olivares said. “I wanted to create real bodies, something that I could see myself in.”

“Unbroken” won the Purchase Award, meaning the piece was added to Bethel University’s permanent collection. This was an honor that surprised Olivares, as she worried her pieces would upset the primary scope of Bethel’s audience. However, she has been met with overwhelming praise. Even in the classroom, peers thank her for the representation in her art.

Olivares also entered a painted piece into the exhibition. “Always With Me” depicts Olivares as a child, sucking on a popsicle at her 2nd birthday party. Another image is displayed below it: a painting of herself the day she began the piece in November 2021.

The piece was started after a mix of life events: friends getting married, constant college assignments and a November car accident. Olivares felt like life was leaving her behind. She then realized that being an adult does not mean leaving behind the less mature parts of oneself, but taking moments to slow down and embrace them.

“No matter how old you get, you’re still gonna be that 5-year-old,” Olivares said. “It’s always gonna be part of you.”

Despite being her first attempt at a painted portrait, Olivares’ piece won one of the Juror’s Honorable Mention awards.

Senior art major Eleanor Carlson finds inspiration in the less-noticed parts of nature. Pebbles at her feet while she waded at a beach in Santa Barbara. Soon-to-be crumbled leaves on the sidewalk in autumn. Blue-tinted shadows cast on the snow.

Carlson was the winner of the Raspberry Monday award alongside senior graphic design major Bryson Rosell. Her piece “Pebbles,” based around the colorful rocks during her January California trip, was the award winner. The piece was a part of Carlson’s ongoing series, titled “Of looking and looking.” All of the pieces within the series are close-up looks at small portions of nature that are often overlooked in day-to-day life.

“It’s not about the place,” Carlson said. “It’s about looking and choosing to observe and delight in the small things.”

A virtual juror’s talk held April 16 allowed students the platform to ask Hiltner questions. During this session, she explained her decision to select Hobus’ piece for this year’s Juror’s Recognition Award.

“I think [her] art was speaking in a way that was very sophisticated,” Hiltner said. “[Her] work stayed with me. When something haunts me, it’s a standout piece.”

After seeing her brother’s discarded radio, Hobus found herself empathizing with it in strange ways. The thought of its volume dial being rotated for the listening convenience of the driver made her reflect on her own experiences of being silenced throughout her life.

“As women, we’re trained to sometimes be quiet and just go along with things, otherwise we’re being dramatic or too sensitive,” Hobus said. “The piece is up to interpretation, but I hope that those viewing could really sit on that idea.”

When the thought of the varying volume of a radio came to mind, the phrase “good girl” accompanied it. Hobus associates the phrase with belittlement, discrimination and silencing. She then wrote the words across a name tag and stuck it to the front of the old car radio.

When Hiltner saw the piece, she felt that Hobus’ work highlighted her personal experience alongside a relatable, universal feeling. That’s the feeling that “haunted” her. That’s why it was chosen for the Juror’s Recognition Award.

“There’s so many amazing works,” Hobus said. “I feel honored and blessed.”

0 comments on “Tradition made new”