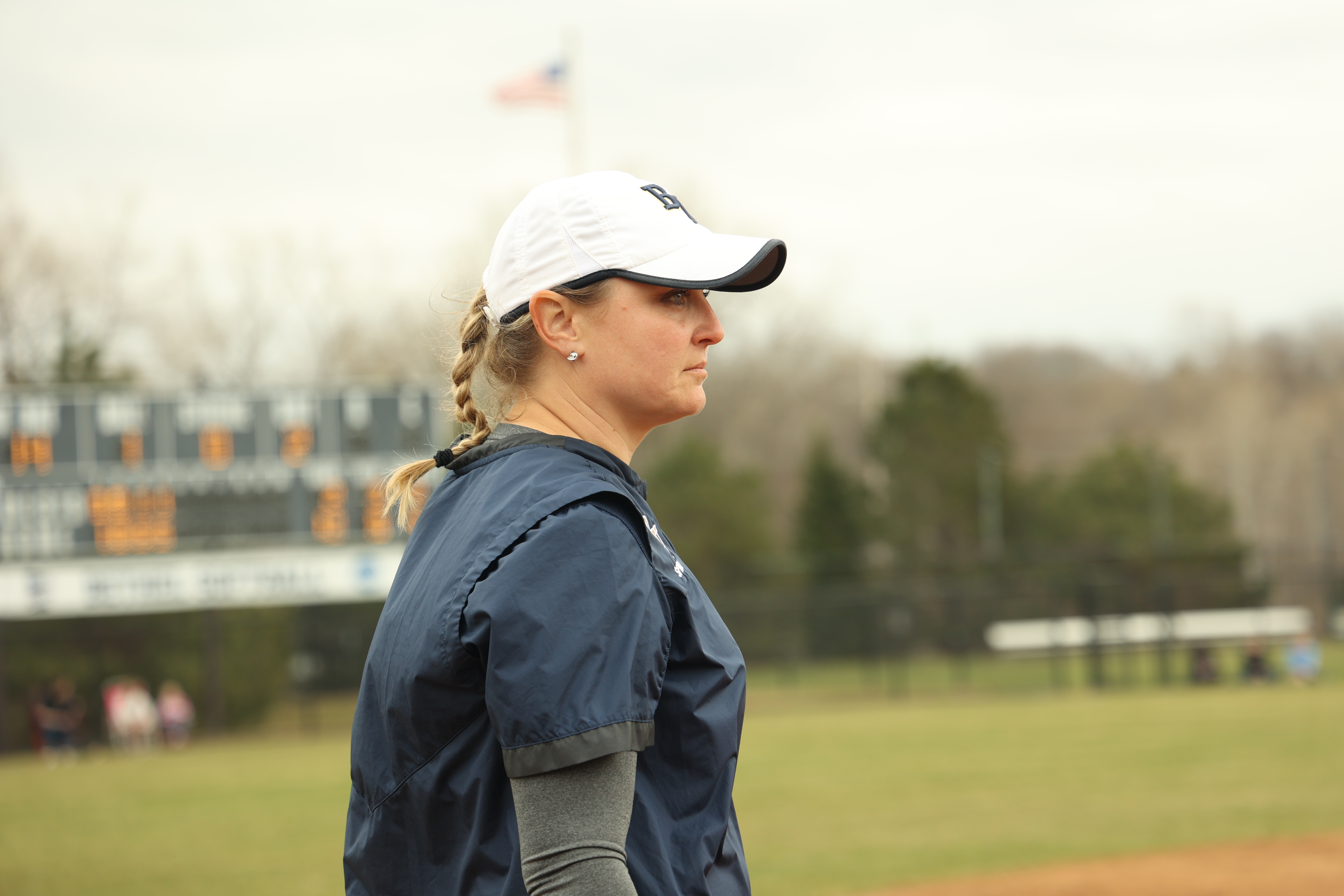 For Bethel softball, the 50th anniversary of Title IX legislation is a cause for celebration and a reminder of the constant need for growth in women’s athletics.

By Caden Christiansen and Soraya Keiser

Bethel University softball coach Penny Foore stands just outside the dugout where shadow meets sun. With sunglasses on and her hair pulled back, Foore means business. From the side of the diamond she gives advice to her player-at-bat or makes quick comments to her husband and assistant coach Roman Foore in the dugout. The Royals are playing in a makeup game against Hamline University in mid-April and quickly score three runs just in the first inning.

But it’s not just an ordinary win for the top-ranked team in the Minnesota Intercollegiate Athletic Conference. Foore has just coached her 150th career win and her team is also ranked 11th in the nation by the National Fastpitch Coaches Association. However, the success of her team is not her only mission.

Growing up in small-town Iowa, Foore and her family lived and breathed softball. She played. Her dad umpired. Her mom coached.

“She pressed really hard even when we were young, like, women can do math. Women can do sports,” Foore said.

Foore had the support of her parents and Title IX legislation, which works for gender equity, in her athletic endeavors, but this has not been the case for everyone.

Foore’s mom played basketball and softball in college. Her teams were never prioritized, and sometimes they would have to practice at 2 a.m. because that was the only time their team was allowed in the gym. Foore’s mom graduated in May 1972. Title IX became law June 23, 1972, only one month later.

Title IX is a part of the Education Amendments of 1972 that protects people from discrimination based on sex while participating in education programs and activities that receive financial assistance from the federal government. It applies to athletic programs by requiring schools to provide equal opportunities for men and women in sports. Title IX has helped women introduce new sports to their schools, increase financial assistance through athletic scholarships and receive more funding for equipment, travel and other expenses. Numbers and funding do not have to be equal between men’s and women’s teams, but athletic departments must strive to be fair based on participation numbers, student body demographics and revenue streams.

Looking at how far women’s athletics have come since her mom’s collegiate career often makes Foore emotional, and she wants “to just continue to champion that cause and empower young women as much as we can.” Foore believes there is still a long way to go before true equality is achieved.

Foore is one of two female head coaches out of the 18 head coaches – for nine men’s sports and nine women’s sports – that make up Bethel athletics. Volleyball coach and Assistant Athletic Director Gretchen Hunt is the other. However, Foore feels like her position as a woman is still different because she is not an administrator like Hunt.

“I’m kind of on an island a little bit,” Foore said.

However, Foore says she has never felt like she has been treated differently because of her gender.

“It’d be great to have more female coaches on staff and it’s kind of where we are at right now. It’s something we think about, and try to, as opportunities arise, lean into that,” Athletic Director Greg Peterson said. “Me being male, I can’t envision being in their shoes.”

According to data submitted annually by Peterson on behalf of Bethel athletics to the Equity in Athletics Data Analysis, women’s head coaches make on average $12,000 less than men’s head coaches. These averages do not take into account the size of the team, time the coach has been at Bethel or the revenue teams bring in. Foore and Roman coach professional softball in the summer in order to make a living. This second job also provides them with the chance to recruit for Bethel softball without using funds allocated for recruitment in their budget.

So far during their individual 2021-2022 seasons, Bethel women’s sports teams have had successes, including volleyball tying for the regular season MIAC championship and earning an at-large bid to the NCAA tournament, basketball finishing 17-5 in MIAC play, track and field winning its first MIAC championship and softball currently ranking nationally in the top 25.

“There is some really cool stuff going on, and I believe wholeheartedly that we are supposed to be good; excellence is biblical,” Peterson said.

As Bethel athletics continue to compete at a high level both within the MIAC conference and on a national level, Peterson believes there are still ways the university can provide a more fair and equitable experience for all of its student athletes. Peterson appreciates having voices like Foore and Hunt to give him different perspectives into changes that need to be made to ensure equity for all student athletes.

“I think we do some things well, and I think we have some areas to grow in,” Peterson said. “The biggest thing for me is having a group of people around me, like Penny and Gretchen, that have a perspective that I don’t have. We’re working to get every sport as good as they can be.”

Foore’s Royals faced off in a doubleheader against The College of St. Scholastica at Ona Orth Athletic Complex April 23. The Royals swept the games 12-2 and 6-1, improving their winning streak to 21 games.

The Royals had more to celebrate than their own success. Golden party decorations spun in the wind, hanging off the unusually packed bleachers. There was an energy among the Royals as the team honored the 50th anniversary of the Title IX legislation being passed.

As the Royals softball team continues to embark on an already historic season, the April 23 double header serves as another reminder of the immense progress women have made in sports and the continued growth that needs to happen to ensure equity.

“It is my heart and my passion to see women’s sports continue to rise,” Foore said. “And not in spite of men’s sports but in addition to men’s sports.”

The statistics listed above are accurate as of April 28.