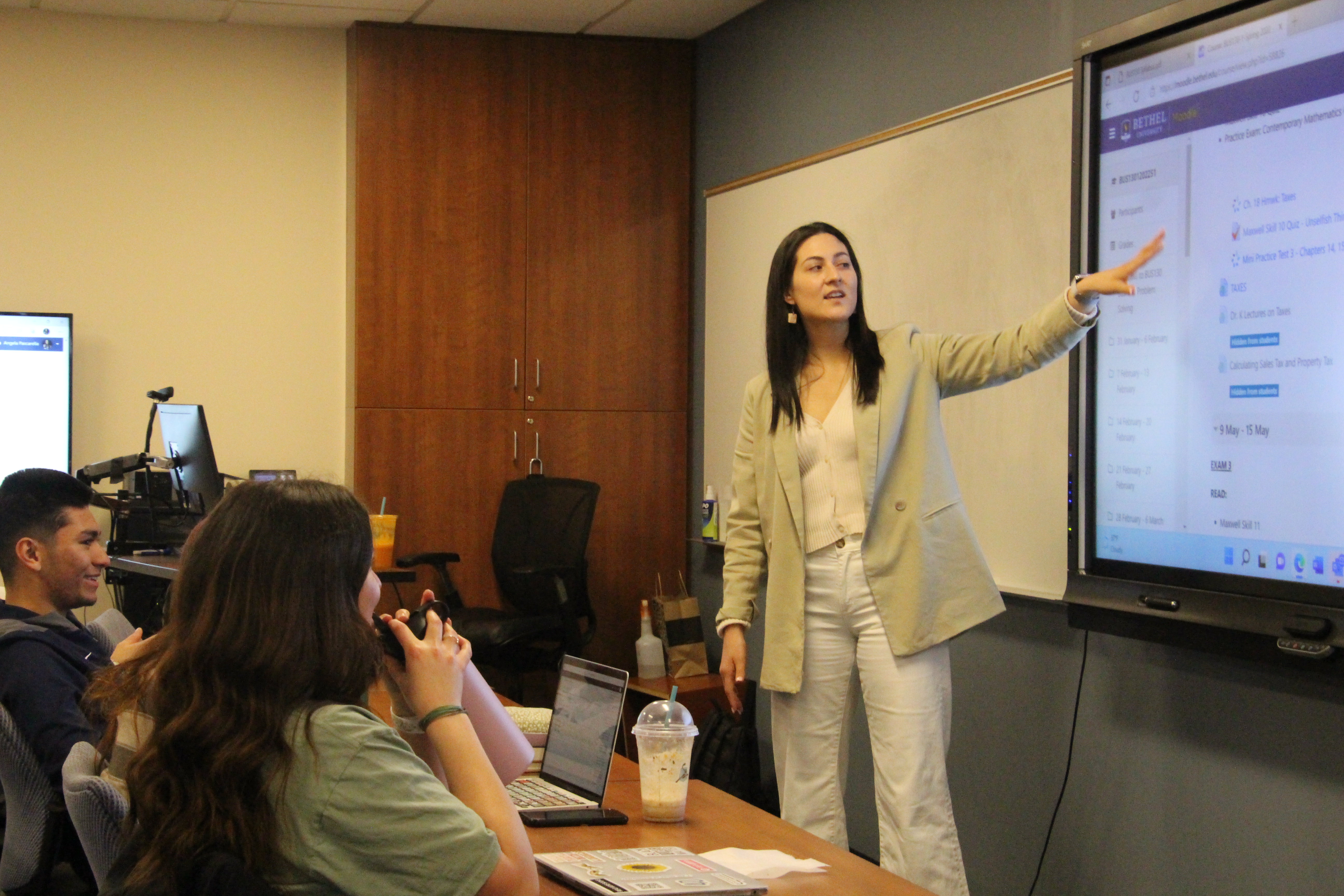 Adjunct Professor of Business Angela Pascarella returns to the institution that stirred her passions, giving students a new perspective.

Angela Pascarella sat through a Bethel University nursing orientation program in 2011 as a freshman with dreams of pursuing a career as a nurse midwife. New realizations transpired when she learned about the program’s high rigor and the possibility of a number of students being cut from the program during her sophomore year.

For the first time in Pascarella’s life, she heard a voice telling her that she “wasn’t good enough for this.” This led to an “identity phase” in which she switched her major from psychology to elementary education.

Pascarella conducted a greater self-analysis of her personality and “who God called her to be” in her Introduction to Creative Arts class. She recalls taking the StrengthsFinder assessment  alongside some nursing majors in her class cohort and found that while they ranked high on the empathy and service scale, her results displayed that she was an “achiever and a natural leader.” Pascarella soon found another common thread amid her skills and trail of majors: A passion for “human centeredness and connection.”

These revelations, along with a heart for people and business, prompted her to major in business with an emphasis in human resources and led her to the door of Associate Professor of Business Joyce LeMay’s office, who affirmed Pascarella’s decision.

“Bethel fostered a really awesome environment for me to be myself and not be ashamed of struggling,” Pascarella said. “It provided an open space, whether it would be in class or other outlets, to just be my authentic self.”

Her natural leadership tendencies were significantly shaped during her childhood in  Winneconne, Wisconsin, where she grew up as an only child. When Pascarella was around three years old in 1996, her father – a successful entrepreneur, leader and businessman – passed away from a heart attack. In the next five years of her childhood, Pascarella said that she went through a season of hardship. This led Pascarella to grow in responsibility and maturity.

“I had to step into a lot of different roles and it took away from me being able to be a child. It also gave me a great sense of perspective that I am capable of a lot of different things beyond what I could have ever imagined,” Pascarella said. “In the midst of that, the Lord has just been so gracious.”

Pascarella recognizes that these years of hardship were the pathway that eventually led her to a relationship with Jesus. Soon after, Pascarella and her mom moved to Oshkosh, Wisconsin in 2003 and attended Plymouth Congregational Church. During their first church visit, the youth pastor approached Pascarella and invited her to attend the youth group program. Every Wednesday and Sunday, Pascarella attended youth group, where she fostered a strong foundation of both faith and leadership.

“I got to practice my leadership skills by being a youth leader in high school and make amazing friendships and come to know the Lord really personally,” Pascarella said. “I had no shame in publicly declaring God’s goodness in my life.”

Pascarella often gets Facebook memories notifications about posts from over a decade ago, which she said serves as a sweet reminder that God’s word never fails and is “living and breathing in the situations [she is] in right now.”

Pascarella’s four years at Bethel strengthened her faith through seeking mentorship from former pastor Laurel Bunker, pursuing therapy and attending chapel services. In the business department she ignited her passion for human resources in business classes and through relationships with a number of business professors.

“Through our discussions, it was evident that she was a great match with the human resource management emphasis because she values people and understands the commitment of engaging with employees so that God will bring out the best of each person in the workplace,” LeMay said.

When Pascarella was a senior in 2015, she told former economics professor Tim Essenburg about her dream of returning to Bethel one day.

Before graduating from Bethel, Pascarella stood outside the Nelson residence on a “beautiful spring day” and received a call from Baker Tilly Virchow Krause with a job offer for a Human Capital Services Senior Consultant role. This role was her official entrance into the human resources industry, giving her the opportunity to configure new HR technology on the computer for clients and travel internationally to London. While Pascarella loved gathering and presenting information to executives, she eventually felt burnt out from the 12-hour workdays and desired to go in another direction.

Pascarella put in her four-week notice, sold all her belongings and moved to London in 2017 to pursue a one-year MBA from Richmond, The American International University in London with a focus on mental health in the workplace. Apart from her studies, Pascarella’s time in London was “a year of just truthfully drawing close to the Lord, getting plugged into Christian community and figuring out what [she] was supposed to be doing in this life.”

Pascarella rented a small flat with large windows overlooking Kensington, unfurnished aside from a twin-sized bed and a beach towel on the floor.

“I would just lay on my back [on the beach towel] with my hands open and I would just pray,” Pascarella said. “I would just ask the Spirit to come and just heal me, reveal himself to me and guide me… I would do that for hours.”

In figuring out her next career jump after receiving her MBA, Pascarella looked to the network she had created from the BethelBiz mentorship program – a program that offers students one-on-one relationships with Bethel alumni— and sought career advice from BethelBiz mentor John Beacham. With Beacham’s wisdom and guidance, Pascarella made her return to the consulting world at Optum in August 2017. Six months later, she transitioned to a Customer Experience Consultant role at UnitedHealth Group, where she remained for nearly two and a half years.

In the summer of 2021, Pascarella pivoted to a consultant role at Slalom focused on organizational effectiveness, working on developing operating models for employee efficiency.

In the spring of 2022, one of Pascarella’s dreams came true when she was invited to return to Bethel as an adjunct professor in the business department to teach business problem solving. When she announced the news on LinkedIn, she received a kind note from Essenburg about the roses. Pascarella said that it has “been the greatest honor of my life to be able to teach [at Bethel] this semester.”

Every Monday at 6 p.m. Pascarella walks into RC315 with a business presentation prepared for 22 students.

Pascarella’s class starts off with a critical thinking activity, but students have been engaged in a number of learning experiences: doing Harvard Business Review activities, discussing business ethics topics, talking about their class book and breaking off into math lab groups.

“Something that Professor Pascarella has taught us and encouraged us to do is to never allow a job, person, company to make you feel as though you are less than,” junior Mariah Boumeester said. “If the company does not see you for the asset you are, I can guarantee that there is someplace else that will.”

Pascarella describes her classroom environment as one that is fun and safe, a place where students speak up.

“The greatest lesson I have learned from Professor Pascarella is to stay true to your own values. In class, Professor Pascarella highlights that there will be times when going into business that we are forced to make tough ethical and moral decisions,” freshman Elly Tyberg said. “She does an amazing job of telling us that when this happens we need to go back to what we believe to be true and ethical.”

As a businesswoman in consulting, Pascarella brings a new perspective to students in the same place where she fostered her passion for human connection and could be her authentic self.  She hopes to be an avenue to help students find what the Lord is calling them to do.

0 comments on “A place for authenticity”