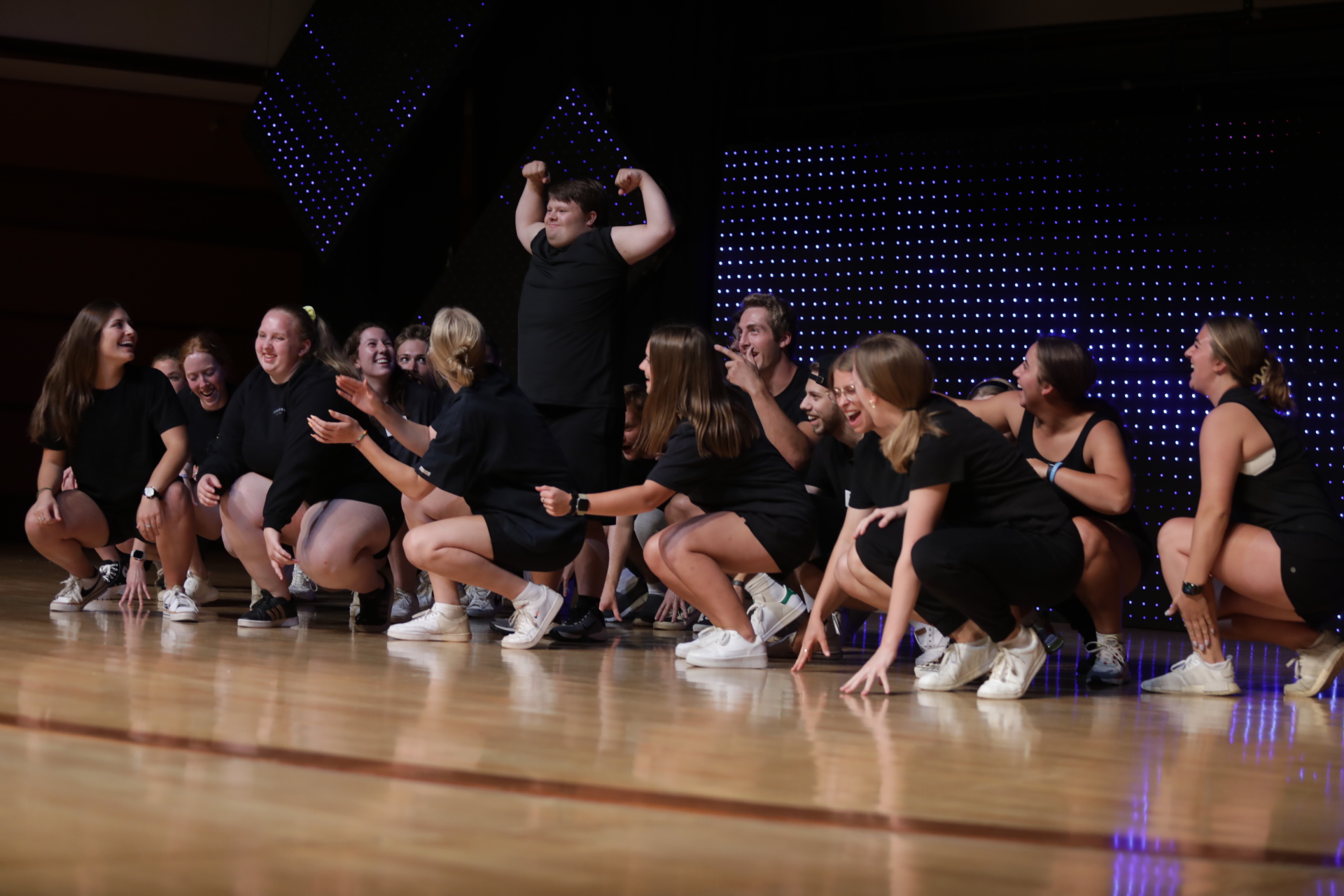 Around 5 p.m. Saturday, Bethel students started camping outside of Benson Great Hall. Some had a picnic, some played video games, some simply talked and laughed with friends. The group of so-called tailgaters didn’t show up two hours before a football game, rather this year’s annual Welcome Week Show: Bethel Unscripted.

At 7 p.m., the sound of laughter echoed throughout the audience as Welcome Week staff performed. Smiles were seen on almost every audience member as their eyes were cast to the stage. While the Show is seemingly known for being a funny introduction to Bethel for the freshmen, more than what someone sees on stage goes into all of the inside jokes, improv scenes that surprise both the audience and actors on stage, elaborate homemade props, set changes in between scenes and more — it’s a collaborative effort between all of Welcome Week, requiring long days, DIY projects, dance rehearsals and more.

The Community Welcome Week committee is the main committee in charge of producing the Show: from the conceptualization of the theme all the way to “lights up” on Saturday night. In March when committees are first formed and Welcome Week officially begins, Community starts brainstorming ideas for possible show themes.

“We had a few other ideas, like Disney, but we ultimately decided on reality TV,” Ally Stackhouse, committee head of Community and director of Bethel Unscripted, said.

The committee built scenes from popular shows such as “Dance Moms”, “Master Chef”, “Shark Tank” and more. Each series was divided into its own scene and was written and edited to fit various scenarios relatable to the Bethel community and college life.

Once a week during the spring semester last year, Community met to write the script. Edits were made on a consistent basis throughout the summer and even up to the day of show. During the summer all of Welcome Week were working on memorizing their lines, having the occasional Zoom rehearsal and collecting costumes and props.

“My team went through and made props and costumes lists so we could order things online and so people could start collecting things of their own,” Stackhouse said. “By the time Welcome Week started, we had all our props and costumes, the rehearsal schedule, the script edited and ready.”

On August 19, all of Welcome Week moved in early to prepare for the freshmen move-in process, plan and finalize the transfer student event, commuter kickoff , day of service and more — days started at 8 a.m. and ended at 11 p.m. or later. They were also having Show rehearsals for up to five hours per day.

“We started by learning the dances the first two nights and then from then on it was Show rehearsal where we rotated scenes,” Stackhouse said. “I had two scenes on stage at a time rehearsing at once, while other scenes were in other places.”

While Stackhouse and the actors were busy on stage, Stage Manager, Grace Veenstra, was busy backstage with her crew. As stage manager, Veenstra oversaw all of the props, costumes, set pieces, was in charge of creating a map for which actor gets a microphone in which scenes and more — tasks that Stackhouse said made everything so much smoother and organized due to Veenstra’s help.

“I don’t think people realize how much work goes into a general show, if they had not been in theatre before,” Veenstra said. “Because now you’re thinking about the logistics of mics, what exact props we need, how long in advance do we need to grab a certain prop and the general logistics of moving in between scenes as clean and fast as possible. You need so many people to maneuver between scenes and luckily we have those people willing to help.”

A collaborative effort was made all across Welcome Week, not just from Community. Stackhouse said people were excited and willing to jump in whenever they could help, while also making suggestions on various lines they could say, actions they could make or how to make a scene better, which led to several of the scenes having improv moments between the actors. One of those improv moments was during the “Shark Tank” scene, with the characters Emma and David pitching their idea for “a hammock that would prevent premarital touching.” Originally, the couple were just supposed to stand a distance apart from each other, but Dan Magoo, who plays David, brought out a tape measure one day and added a moment where he measures the distance between Miriam Johnson’s character and himself to check if they were far enough apart.

The collaborative effort during rehearsals was made on top of the already busy days that Welcome Week was putting in. The break time given to staff, intended for them to rest, Stackhouse said was often spent running scenes, rehearsing group dances, making last minute props and more.

“Any time we weren’t doing anything for move-in or whatever, was more than likely spent doing something for the show,” Stackhouse said. “It is tiring, I won’t lie.”

But she says it’s all worth it.

“I think a lot of people say they don’t understand why someone would do Welcome Week, why move people in, why put so much work and time into this one show. We’re not getting paid for it, not reaping the benefits besides the relationships that you build during and the support system you create, it’s all 100% worth it” Stackhouse said. “I think people also get surprised because they hear us say, ‘ugh we’re so tired,’ but the reality is that we are physically drained, maybe emotionally, but spiritually, we’re lifted up.”

0 comments on “A look behind the scenes of Bethel Unscripted”