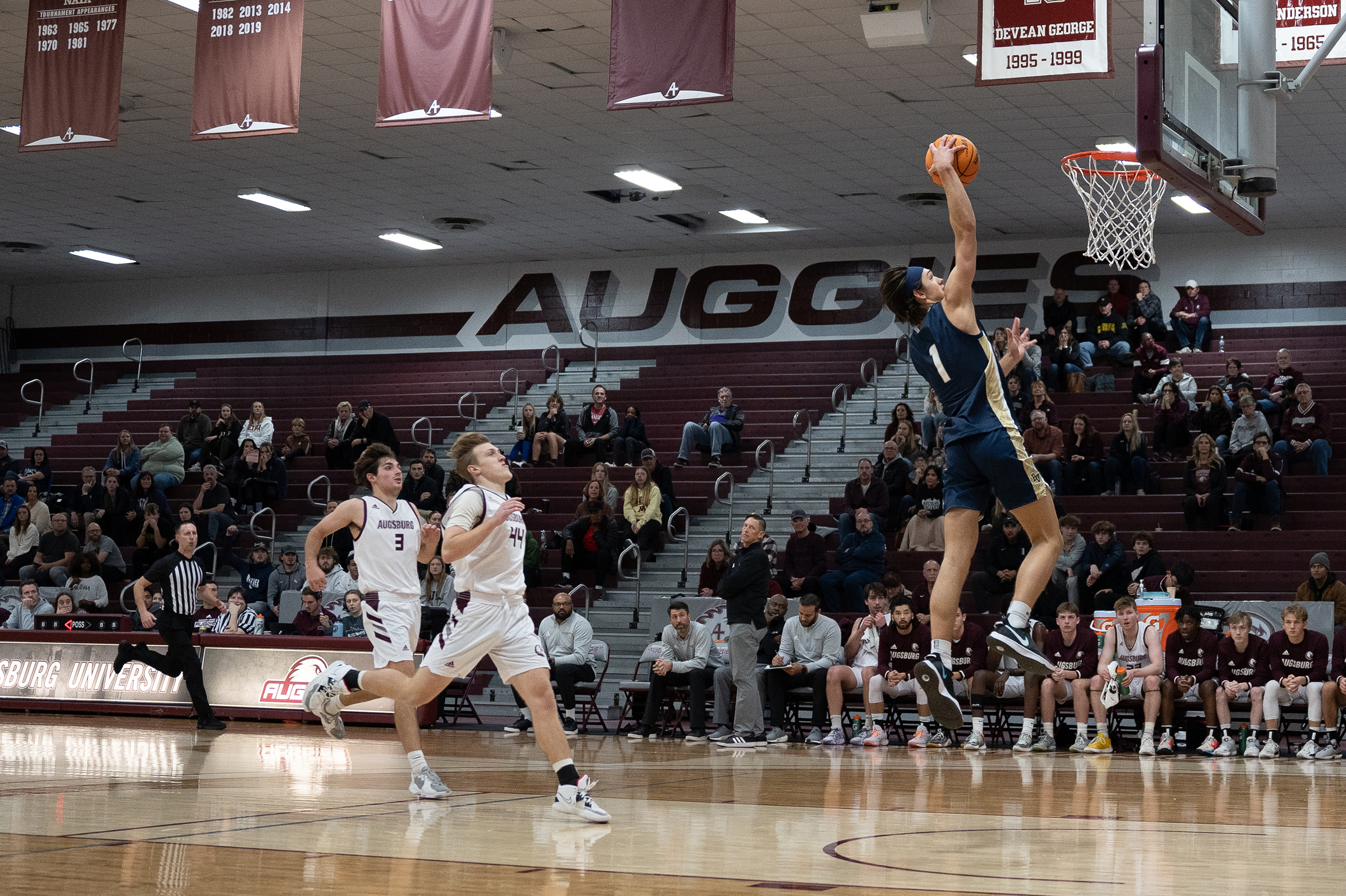 By Anna Pearson and Ella Roberts

Bethel coach Zach Filzen slammed his whiteboard on the glossy wooden floor of Si Melby Hall Gymnasium during a timeout in a game at Augsburg University Tuesday.

Just previously, Augsburg had the ball on the line for a free throw with 16 minutes left in a close contest in the first half. During the second shot, Bethel’s Caden Boettcher went up for the rebound, but could not secure it, losing the ball out of bounds, giving the ball back into Auggies hands.

The inbounder for Augsburg tossed it in, finding a teammate outside of the three-point arc where he swished the ball into the net, making the score 49-43. Augsburg fans exploded. BU trailed for the remainder of the game with a final score of 76-60.

Augsburg football recruits and their families poured into the stands to watch their future alma mater compete against the fellow MIAC team before the game. A small Bethel fan section sat right behind the Royals’ bench to cheer them on, surrounded on all sides by a sea of maroon-clothed Auggies.

The Royals had an aggressive first half, scoring in the first 30 seconds of the competition after Zach Doely secured a layup in the paint off the tip-off. Falling behind 13-4 after six minutes into the game, the Royals fought back and chipped away at the deficit in the following three minutes, regaining the lead at 18-17 with just more than 10 minutes left to play in the half. Bethel held the lead for the remainder of the half, entering halftime up 39-37.

“Going into halftime, we were in a good spot,” Filzen said. “There’s another level we could get to, but obviously that’s not the way it transpired.”

Augsburg opened the half on a 21-4 run to take an 11-point lead at 54-43 with 12:30 left to play in the game. Bethel managed to cut the margin to six near the 11-minute mark, but Augsburg took control and pushed the lead to 21 points.

The Royals were led offensively by Josh Hoffman with 14 points off the bench while Zach Doely led the starters with a 13-point, 16-rebound double-double.

With seven freshmen players filling up the roster this season, the coaches have had to adjust to those still learning what college basketball is like at the beginning of a new season.

“It’s a lesson learned for a lot of our younger guys, but also our older guys: to play well, and execute and play really, really hard at all times,” assistant coach Joel Cline said.

The Royals’ next game is Nov. 30 at Walker Fieldhouse against Hamline University.