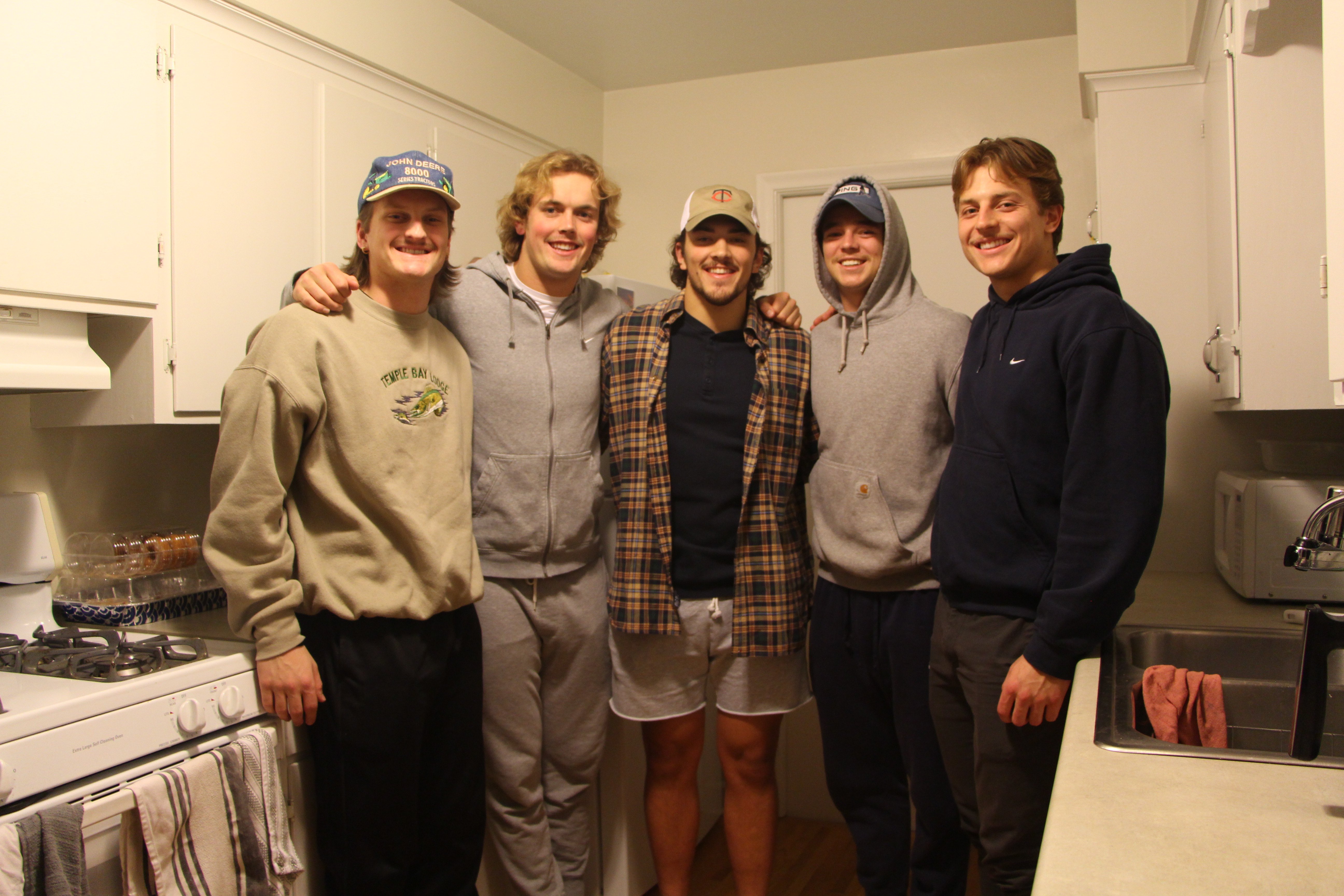 For the students who choose to live off campus, having their own space allows them certain amenities and resources that on-campus living does not provide.

By Makenzi Johnson and Caden Christiansen

After a full day of classes, activities and extracurriculars, most students are quick to rush home for whatever rest and relaxation is needed. For some students, that’s making the brief walk from the main buildings on campus to one of the eight residence halls, just a few steps away. For others, going home is getting into their car, leaving campus to their off-campus residence however many miles away — an extra step of driving to and from campus is added into their routines.

For juniors Aaron Ellingson, Joey Kidder, Aaron Loe, Kolin Baier and Breck Ferrin, a three-mile drive lays between Bethel’s campus and their shared, rented house, which provides a much-needed escape at the end of the day.

“Being able to actually have some alone time is really nice. Even if I want to get away from these guys for a while, I can just go into my room,” Ellingson said. “At Bethel, you have a roommate constantly that you’re never not around. [Having your own house] is a lot quieter than being on campus.”

All five of the residents agreed that having their own space is nice, even with the adult-esque responsibilities that come with it.

“Things I’ve done recently like mowing the lawn are fun,” Baier said. “Having those home responsibilities is kind of cool because it feels like you’re grown up.”

They’ve dealt with pipe and drain issues, either trying to fix it on their own or having their landlord come in. With the recent snowfall, they’ve also had to get up earlier in the mornings to shovel snow off of their driveway. Tasks such as fixing a washing machine or snow removal are things that are usually done by Facilities Management or the Snow Removal Crew on campus, but these guys do it themselves.

For the 464 students who currently live off campus, the aspect of independence and having their own space is a large part of their reasons for wanting to live off campus — but off-campus living cannot be for every student.

In November of 2018, Innovations Working Groups at Bethel University presented a list of proposals to improve university operations, including a proposal regarding on-campus housing for students. The first of these proposals was to require students under the age of 21 to live on campus to provide more developmental benefits. On Feb. 12, 2019, former Bethel president Jay Barnes announced that with the support of the Student Life staff, this new policy had been approved and would begin with incoming first-year students in fall 2019.

Now, more than three years later, this policy is still enforced by the university and has created a dilemma, especially for third-year students who wish to live off-campus. Adhere by university rules and pay more money to live on campus or lie to the university to save money living off campus.

For the group of guys, they agreed that they are saving money by living off campus and paying their own rent rather than paying for on-campus housing. They each had a different appeal process.

“I’m also the youngest [resident of the house] so I had some struggles with the appeal, but I just figured things out with my golf coach and was able to live off campus,” Ferrin said.

Most students entering their junior year at Bethel will not turn 21 before the beginning of the fall semester, and as tuition and housing costs continue to increase yearly, some students have chosen to lie to the university about their living arrangements in order to live off-campus with fellow students.

“Yes, we are fully aware [that students lie about their living situation],” Vice President of Student Experience Miranda Powers said. “We work hard in all things to help students go through the proper channels and to live, and speak, with integrity related to community and personal choices.”

Brody Schneider, a senior, has lived off campus since the beginning of the 2021-22 school year, and when he first appealed for off-campus living, as a then 20-year-old, he told Bethel he was living with his father, even though his father lives on a ranch in Colorado more than 900 miles away.

“I didn’t receive a ton of student aid from Bethel when I was accepted, so the main reason I chose to live off campus was to save some money through room and board,” Schneider said. “I think being able to save a little bit of money doesn’t mean I’m trying to trick the university.”

An informal survey conducted in the spring of 2022 asked five off-campus houses inhabited by Bethel students, ranging from five to nine roommates, about the average cost of rent. The results claim that the average rent is around $400 per month, with an average yearly rent total of $4,790. Additionally, these five houses range from 1.5 miles to 12 miles away from campus, and if students elect not to pay for an on-campus meal plan and can spend around $50 a week on groceries, the average money saved in living expenses is around $6,400 per year.

For senior Katelyn Rentschler, living off campus not only saved her money, but also allowed her the space to relax and not feel the pressure of always needing to be a social butterfly on campus.

“I liked living on campus, but at some point, the Bethel atmosphere just got to me a little too much,” Rentschler said. “I think [living off campus] works well for introverts. I get to live in a more realistic world now.”

0 comments on “‘A new chapter of adulthood’”