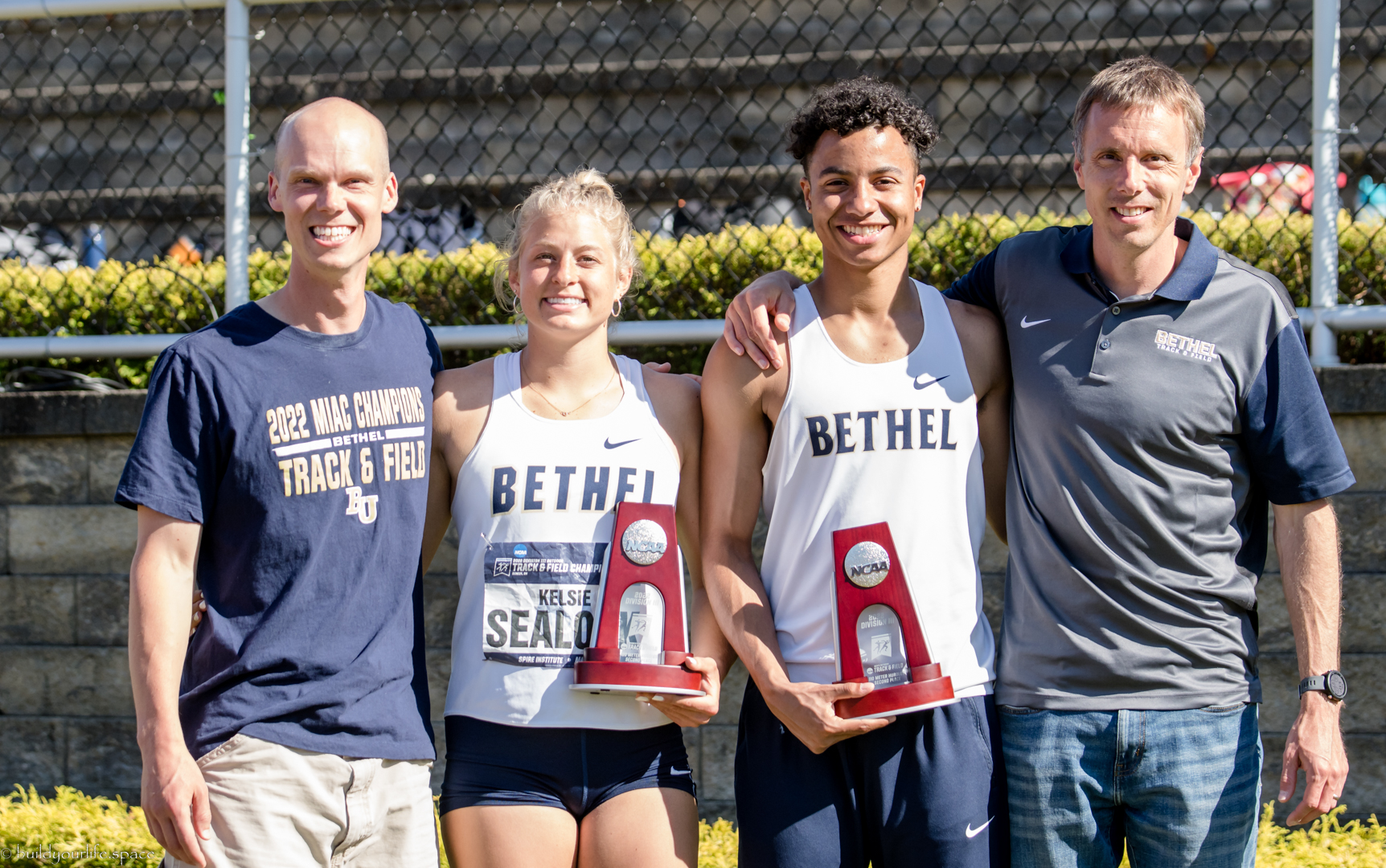 After former Bethel cross country Head Coach Joe Stephens stepped down last May, Kevin Rengo, an assistant coach for track and field, has been hired and has taken over the position.

When college kid Kevin Rengo realized that he no longer needed to take upper-level calculus classes, or as he calls it “real math,” he began his pursuit of a full-time coaching career. Initially going to school at UW-River Falls to become a math teacher, Rengo was surrounded by people who were coaching full-time because he was an athlete and ultimately decided to do the same himself.

Rengo has stepped into the head coaching position for Bethel University cross country with extensive background experience, having run track and cross country in high school and college, as well as having coached at three different colleges prior to Bethel.

Growing up in a small town in Northern Minnesota called Esko, Rengo was born into the world of sports, with his dad coaching football, track, cross country and basketball. Rengo played basketball, ran cross country and competed as a middle-distance runner in track during high school. Rengo believes that he initially got the “coaching bug” from his dad.

He continued his athletic career as a college student at River Falls where he ran both track and cross country. During college, Rengo began to participate in the decathlon, which is an event that contains 10 track and field activities.

Straight out of college, Rengo began coaching at River Falls as a volunteer for the cross country team. From there, his coaching journey took him to Northwestern for two years and Ripon College in Wisconsin for three and a half. Ultimately, he found himself at Bethel as a track and field assistant.

“Being able to mix high-quality academics, really competitive athletics and growing in your faith, that’s a big deal. There are very few places you can do that at a high level in all three of those,” Rengo said.

As the new coach, Rengo set up a “team value session” for his athletes at their pre-season camp this fall. Rengo took the cross country team to St. Croix State Park where the captains led a meeting to determine what the team would be about. They landed on three goals for the season – they wanted to be courageous, unified and to have a high value on their faith.

Rengo has been particularly impressed with the unity his team has been able to create this season.

Andrew Rock, head track and field coach, is someone who has worked closely with Rengo and was one of the big reasons that Rengo wanted to be at Bethel. Rengo knew Rock professionally while he was coaching at Ripon and after coming to Bethel, the relationship has continued to grow.

“He’s extremely supportive as a boss and he’s a phenomenal leader,” Rengo said.

Rock believes that he “meshes well” with Rengo and that they share philosophies.

Rengo describes his relationship with Rock as “competitive.” The two coaches do workouts together and this often serves as decompression time for them. They push each other during these workouts but also “push each other’s buttons,” according to Rengo.

Rock believes that Rengo is a “high character guy” who is knowledgeable and has a great work ethic. Rengo relates well to his athletes and shares his strong faith with those around him.

“It became very clear to [Athletic Director] Greg Peterson and I as we continued to discuss what we wanted to do with the future of the cross country program that he was going to be the right fit,” Rock said.

Kelsie Sealock is a multi-sport athlete at Bethel, competing in volleyball and track, who had Rengo as her hurdle coach for the past three years. Sealock believes that Rengo and Rock are “two peas in a pod.”

Sealock believes that Rengo “pours into his athletes” and wants to make them successful.

After Sealock won runner-up at outdoor nationals last year, Rengo was one of the first people to congratulate her.

“After I ran, he gave me the biggest hug and was like ‘I’m so proud of you’, and I really appreciated it because he’s been there with me through thick and thin,” Sealock said.

When Sealock came to Bethel as a freshman, she did not plan on running or competing in track at all. Sealock said that Rengo “weaseled” his way in and got her to run. During the very first meet of the season at St. Olaf, Sealock broke a Bethel record for the 60-meter hurdles. Sealock was initially in disbelief but reality set in when she looked at the board and heard all the cheering from the crowd, with Rengo once again giving her a big hug.

“It wasn’t my original plan to come here and be the head cross country coach, but I’m very excited that that’s the path God has led me on,” Rengo said. “He’s got better plans than I’ve got.”

0 comments on “Bethel Cross Country has a new leader”