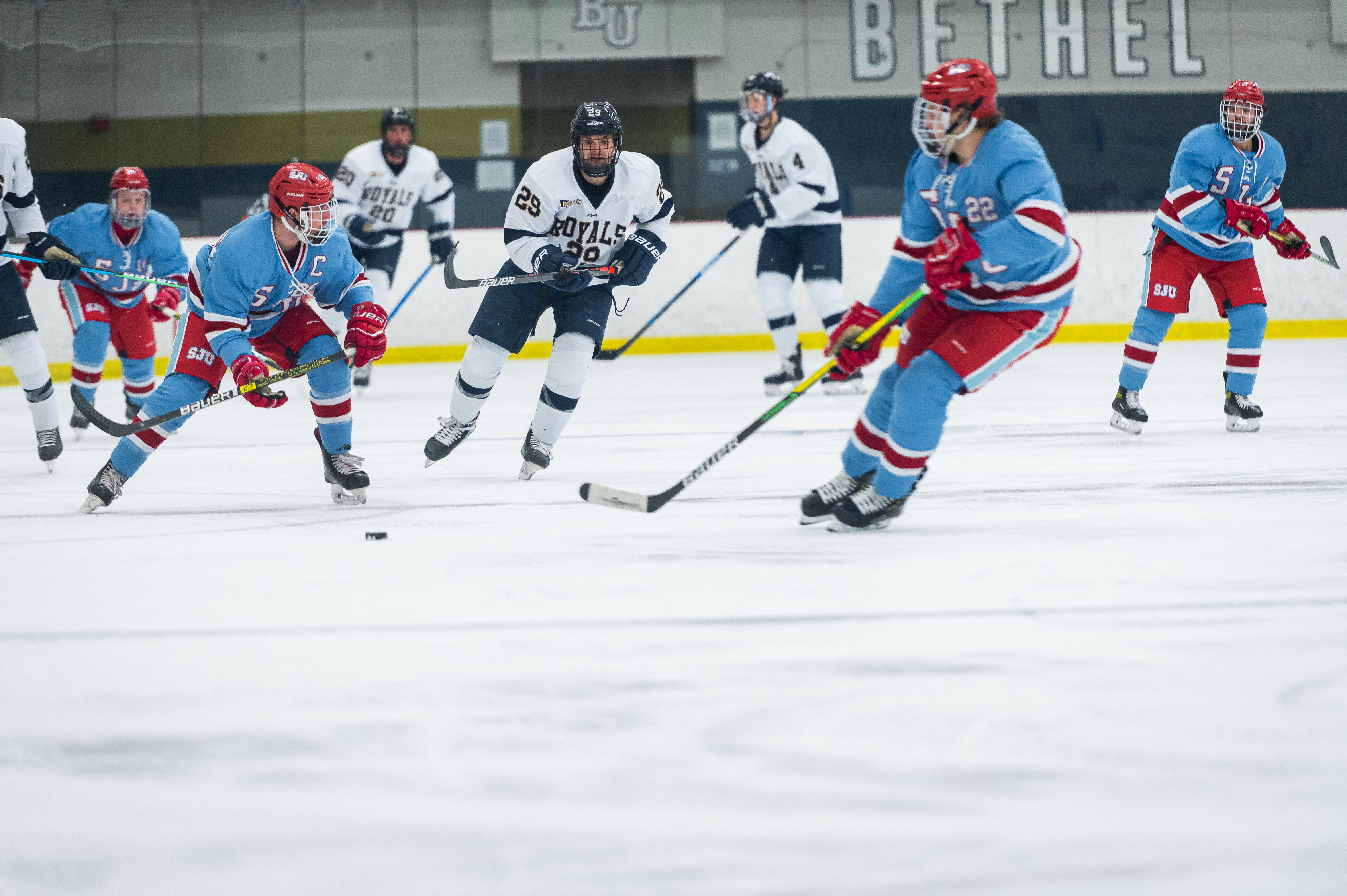 Since St. Thomas was removed from the conference, rivalries within the MIAC have shifted.

Depending on which college team you’re rooting for, a “big game” could refer to the playoffs or to any game against the school’s biggest rival.

Rivalries in college sports are particularly heated, an end-of-season matchup with high stakes and fan anticipation. Not only do they give your team a chance to beat the nearby bully, but it’s equally satisfying to know the team you’re rooting for may have just spoiled an adversary’s season — quenching the thirst of those who hate. At times, it gets ugly on the gridiron and hardwood, especially when a conference championship or national title are on the line or a traveling trophy such as that of the Paul Bunyon’s ax that is passed between the University of Minnesota and University of Wisconsin–Madison, and it becomes an integral part of fan identity.

Since the removal of St. Thomas University, rivalries within the MIAC seem to have shifted. While the Tommies won the MIAC men’s and women’s all-sports titles in each of the past 11 seasons, their football dominance rubbed some members the wrong way. After Caruso took over as coach in 2008, the Tommies won six conference titles and played in two NCAA Division III championship games. They routinely have blown out conference opponents, with nine MIAC victories by 50 or more points in their last two seasons in the conference.

The annual Tommie-Johnnie football game was a century-old tradition that became one of the biggest events in Division III college sports. But St. Thomas’ removal from the conference has left its rivalry with St. John University up in the air.

Prior to Glenn Caruso’s arrival in 2008, St. Thomas hadn’t won a MIAC title since 1990, and Saint John’s was the league’s biggest force. Under the late John Gagliardi, Saint John’s won 489 games, 27 MIAC titles and two Division III national titles (1976, 2003). But then the momentum shifted toward St. Thomas after the school hired Caruso and fueled its rivalry with St. John’s.

From his time as a student, Athletic Director Greg Peterson says St. John’s was always considered a rival to Bethel, but in the ‘80s and ’90s, he is not sure they would have considered Bethel as a top rival of theirs. For years, St. Thomas and St. John’s had the greatest rivalry.

St. John’s Athletic Director Bob Alpers says Bethel is a great rival of theirs even with the Tommies in the conference.

“Their teams are always strong, extremely well-coached, and I think our teams really enjoy competing with each other in every sport. We have great respect for the athletic program at Bethel,” Alpers said. “I think both Bethel and Saint John’s would agree that the MIAC is one of the top conferences in the country and we have great rivalries with all the schools in our league.”

This fall, a St. John’s fan told Peterson he hoped that Bethel and St. John’s would become the premier MIAC rivalry now that St. Thomas is no longer in the league.

Many coaches and teams would like to think their feud is the best, however, here are a few notable rivalries within the MIAC according to coaches and players.

Head Volleyball Coach Gretchen Hunt: In 22 years it has certainly shifted. I think right now we would have to say that Gustavus Adolphus College and Augsburg University are the two biggest because all three of our programs are typically in and out of the top 25 and in the mix for MIAC Playoffs each year. Unfortunately, we’ve lost six in a row to Gustavus. We had a 7-match win streak against them from 2009-2014, but have lost the last six matches since 2018. With Augsburg, we’re 5-5 over the last 10 matches and have won the last two times we played them. College of St. Benedict and St. Olaf College have been huge rivals at different times in the last 22 years and also are always in the mix for playoffs too. It feels like certain groups of athletes have important rivalries with athletes at other schools, and as people graduate, the rivalries shift a little — at least in volleyball. The MIAC has been such a strong volleyball conference for so long, so there aren’t just one to two good schools. Bethel and Augsburg are now out of the playoffs this year, and St. Catherine University is still in with their first MIAC playoff win in history this year.  Despite being out, rivalries are what make it so competitive and fun.

Senior libero Kelsie Sealock: Gustavus. I feel that we’re a pretty evenly matched team, but it just depends on who shows up that night. They seem pretty mentally strong and will put anyone on the court that wants to win. They’re very strategic in how they set their rotations. They’re good blockers, and they swing aggressively.

Junior outside hitter Dani Fridges: Since I’ve been here it has gone back and forth as competition changes, but I would say for us it has consistently been a battle when we face Gustavus and the University of Northwestern. I think our biggest rivals are Augsburg and St. Olaf as it’s always a back-and-forth game with different outcomes.

Head Football Coach Steve Johnson: St. John’s would be our biggest rival because they’ve been at the top of the league in football for the past 50 years. Their former coach, the late John Gagliardi, is the winningest coach in the history of college football. They have been the benchmark of excellence in the MIAC for 50 years. Concordia University and Gustavus are always tough opponents also.

Head Men’s Hockey Coach Steve McKelvie: I actually do not think we have a greatest rival since my time at Bethel. With that being said, since we are a team that is trying to claw to the top half and top of the MIAC, it has seemed like those moments against St. John’s and Augsburg have been some of the bigger games — as they have been two teams on top of the league for a while. Anytime you are chasing teams, those games seem to have more emotion in them. The MIAC in hockey is very competitive, so it is not uncommon to see a last-place team beat the top team.

Seniors Jarrett Cammarata and Sam Wilhite: We both agreed that St. John’s and Augsburg are our top rivals. Both teams have a good program and are usually up high in the MIAC standings.

Head Women’s Basketball Coach Jon Herbrechtsmeyer: I don’t believe in rivalries. I believe rivalries bring out everything that is wrong with sports today. I believe in competition and the purpose of competition is to bring out the best in each other. I firmly believe that the reason we were the one team that would beat UST consistently before the rest of the conference voted them out of the MIAC was that I just viewed them as our competition and not our rivals. That game every year brought out the best in each of our teams.

Head Women’s Soccer Coach Benjamin Linder: Over the years I would say Augsburg University has been our biggest rival but it seems lately that St. Catherine University has now filled that role. Games versus St. Kate’s are always intense and I think we as a team and coaching staff look forward to games with them and have a ton of respect for their team and coaching staff. Beating St. Kate’s at their place in the playoffs 2019 was a huge highlight and it was the first time the women’s soccer team had won a game in the playoffs.

Junior forward Cassie Leland: Our biggest rival is St. Kate’s because it’s one of our most competitive and physical games each season. They’re a successful team and we love the competition.  It’s a game our team always looks forward to and gets super fired up to show up and play well.

Head Men’s Soccer Coach Jeremy Iwaszkowiec: We don’t really have an out-and-out rival. Every game in the MIAC is a battle, and although we have had some recent tough matches with St. John’s and Augsburg over the past few years, I don’t think of them as classic rivalries.

Whether a rivalry dates back decades because of close proximity or it’s newly developed with the shifting success in a conference, rivalries bring out the most competitive side in fans, players and coaches. Being loyal to one team in a rivalry brings a sense of belonging to a community of fans that are hoping the team they are rooting for wins.

The Bethel women’s hockey coach and men’s basketball coach did not provide a response to which their individual rival is.

0 comments on “The adversaries of Bethel athletics”