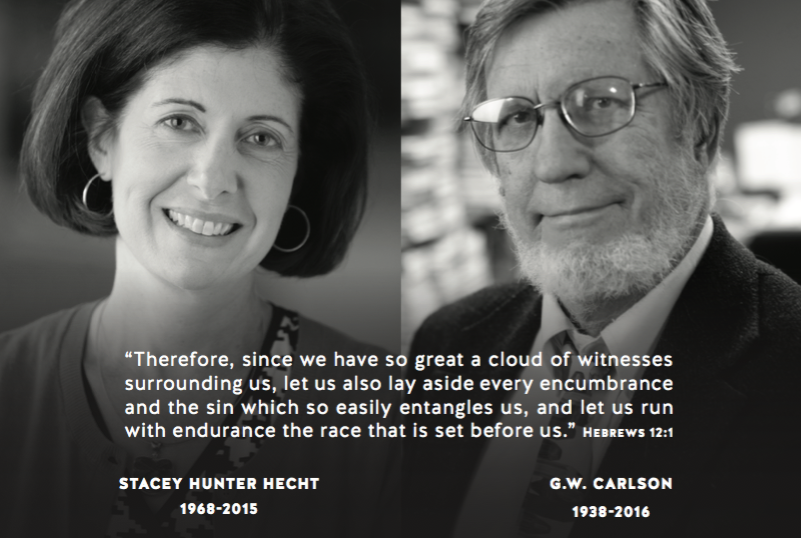 Bethel’s Political Science Department copes with the loss of two professors in less than 3 months.

On December 9, 2015 students and faculty gathered in offices around campus and shared tears over the passing of Bethel political science professor, Stacey Hunter Hecht. She was 47.

On February 1, 2016, the department learned of another loss. Long-time political science and history professor, G. William Carlson, known as ‘G.W.’ to most, died at the age of 72.

“It was like a one-two punch in the gut,” political science professor Fred Van Geest said. He keeps a small space heater in the corner of his office — a keepsake from the sorrowful and therapeutic day he cleaned out Hunter Hecht’s office, shortly after returning from winter break. While sorting what remained of her belongings, mostly books and files, he realized the full extent of her career.

It wasn’t until the moment of taking her name off her office door that Van Geest remembers being struck with the understanding that Hunter Hecht would not be returning.

As the political science department acted to fill the many shoes Stacey wore for both students and faculty, professor G.W. Carlson returned to Bethel.

“The irony is that I recall being at a meeting in 2012 with G.W. shortly after he retired and he said to me, ‘Now I’ve retired and nobody will remember me in two years,’” Kathy Nevins, Bethel psychology professor said, smiling faintly with tears in her eyes. While speaking, her email inbox continued filling with memories of Carlson, shared by fellow faculty.

“We recognize that in many ways, he was a grand link to Bethel’s foundational years. He lived it,” Nevins said.

Bethel faculty members use the faculty email as a means to share support, memories, lamentations and encouragement during the recent hardships.

“I was overcome by the sadness but I remember feeling an overwhelming feeling of friendship and support,” Van Geest said.

“The faculty is a huge support to me,” Vermeer said. “I think just seeing them grieve and their vulnerability in showing how affected they are has allowed me to grieve. But I don’t think I’m handling it well, to be honest.”

Hunter Hecht and Carlson’s impact remains a vital component to the Bethel story for faculty and students in the department. Hunter Hecht was instrumental in hiring Van Geest, Moore, and professor Andrew Bramson – the remaining political science faculty members.

Moore remembers the day he arrived in Minnesota to interview for his teaching position at Bethel. Hunter Hecht picked him up from the airport and greeted him with ‘Let’s go have some cookies!’ Moore was surprised by Hunter Hecht’s warmth and kind personality. The next day, he met Carlson at the Louisiana Cafe. Moore anticipated being grilled by Carlson about his qualifications and instead, remembers how surprised he was when Carlson spoke for two hours about why he should love Bethel.

“They taught us what it’s like to be Bethel professors,” Moore said, “I need to convey that now because they aren’t here to do that anymore.”

Vermeer was close to leaving Bethel during her freshman year due to homesickness.

“Stacey is the only reason I’m still at Bethel,” Vermeer said, owing her change of heart to being invited on a trip to China with Hunter Hecht.

“It was crazy, overwhelming and incredible,” Vermeer said of the trip. “Hard and challenging—everything Stacey wanted it to be.”

Vermeer remained close to Hunter Hecht and received regular phone calls from her during Hunter Hecht’s medical leave. She kept a Vermeer/Taji presidential campaign button in her home and told Vermeer she prayed for her every time she saw it.

Carlson read at least three books a week and became known for the ability to carry on a lengthy conversation about any topic. “His office was a potential life-threatening hazard,” Moore joked. “Imagine the professor you know with the most books and then quadruple that.”

“He was always wandering the halls and making connections,” Van Geest remembers. “He transcended well beyond his departments.”

Carlson wrote a lengthy biography and tribute to Hunter Hecht after her death, which was published to the history department’s blog — it is titled “A Christian Commitment to Civil Discourse: G.W. Carlson on Stacey Hunter Hecht.”

As faculty pass along poems, share prayers and give each other time to grieve in their own way, plans are being made to strengthen the political science department after a year of tragedy. The search to hire a new, full-time professor is underway. The aim is to honor Hunter Hecht’s legacy in replacing her position by selecting a person her mirrors her beliefs, teaching students to live with convictions and be Christ-like in their approach to politics. It is currently not clear who that person will be or when they will begin at Bethel because of the extensive process used to replace an academic position.

“Sometimes, as humans, I think if we have a place to put something it helps us constructively move forward,” Tim Essenberg, economics professor said.

For many, the concept of Heaven is a key component to the healing process.

“I can’t imagine losing someone and not being at Bethel,” Vermeer said. “So many people have told me, ‘Zoe we still have hope even though Stacey is not with us’ and then it hit me how thankful I am for this community.”

Essenberg looks to the book of Hebrews for inspiration and he finds a place for Stacey Hunter Hecht and G.W. Carlson. “You will be missed. Even as you join the cloud of witnesses that hail from Bethel and give us peace,” Essenberg said.

0 comments on “Cloud of Witnesses”