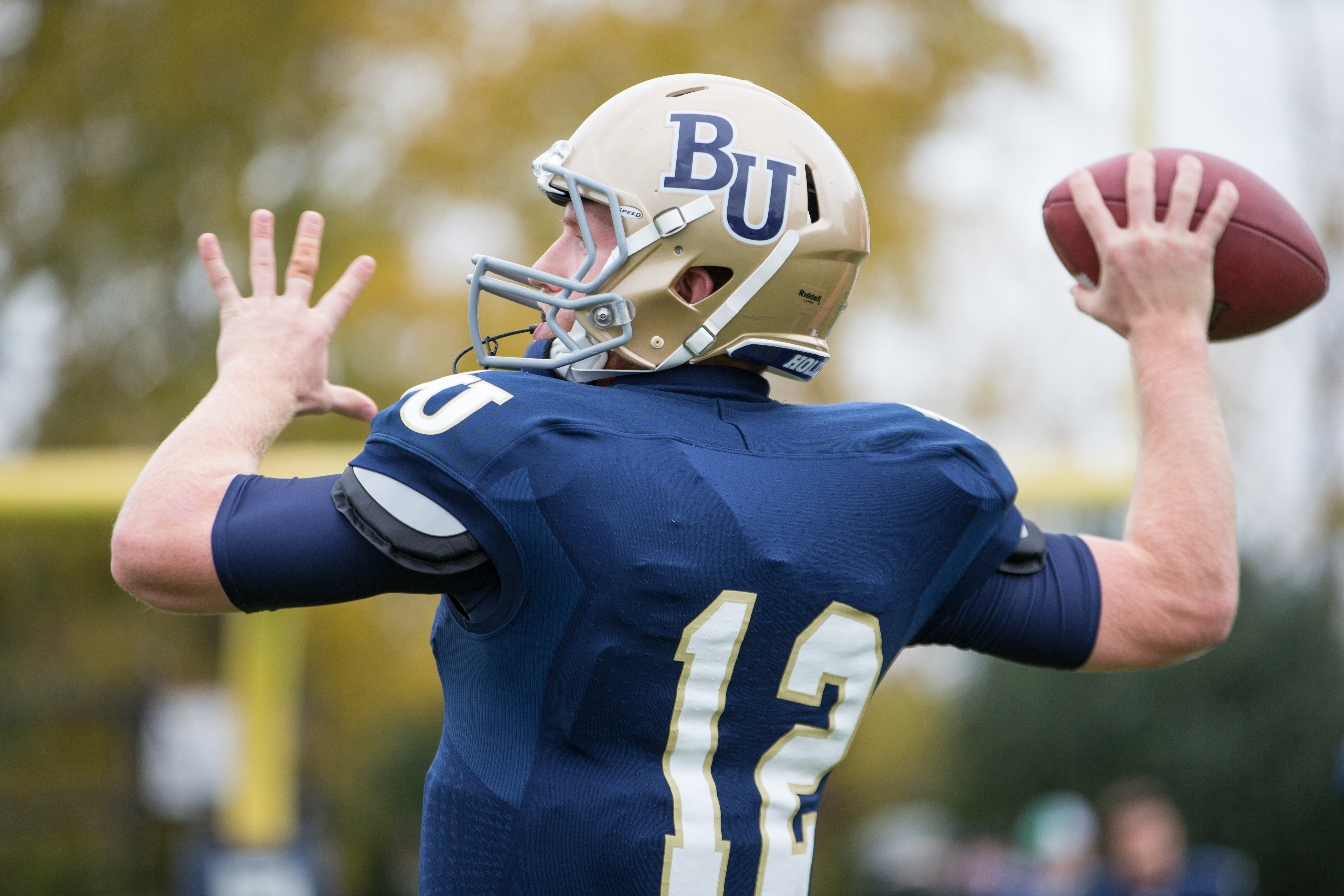 Jake Marsh said an early goodnight to his friends and slipped behind the gates to prepare his mind for the following day. Music, laughter and camera flashes from the nearby homecoming dance leaked onto the unlit field.

He visualizes the entire game before it happens.

The night before home games, his silhouette traces each anticipated action. It marches behind the bleachers and around the trees. It mouths the national anthem. It shakes the hands of imaginary players.

He looks into the home stands and pictures a sea of gold and blue fans. He closes his eyes and hears the low thunder of excited feet stomping against the bleachers.

“I’ve been pretty calm the past few weeks,” Marsh said. “I’m a huge believer in visualization. I just tell myself that I’ve got it.”

When Marsh opened a text from head coach Steve Johnson late Sunday night after the St. Olaf game, he didn’t know what to think.

The next morning, he left the coach’s meeting and broke down in tears on a bench outside of the Recreation Center. His sister panicked when he called her, crying, until she realized it was tears of joy. He would start that Saturday against St. John’s.

Since the homecoming game against St. John’s, freshman Jake Marsh has led the Bethel University Royals as starting quarterback. Prior to this game, he was the third-stringer behind senior Andrew Dzurik and sophomore Trey Anderson.

As the former quarterback and baseball pitcher from Wayzata, the biggest high school in Minnesota, Marsh is still getting used to the unconditional support of his teammates at Bethel – especially when he began to play over them. When he threw his first interception against St. John’s, pats on the shoulder and words of encouragement showered him on the sidelines.

Marsh esteems Anderson and Dzurik for their positive attitudes. They are his greatest role models on the team.

Anderson, who was last year’s starting quarterback before he injured his knee, said being a leader on the team isn’t easy, especially when his role constantly changes. It’s something he chooses every day.

“I can’t let adversity change my attitude, because my joy is found in Christ,” Anderson said. “Jake isn’t taking my playing time – he’s filling a role. That’s part of being on a team.”

Marsh doesn’t let his age keep him from leading his older teammates. One practice, after the Gustavus game, an older player ran a faulty route and Marsh called him out without hesitation.

“I love being able to push them, especially the seniors, because they only have three games left. So if yelling at them during practice helps them reach their potential, I’m all for it.”

The next day, Marsh said that the player ran the route flawlessly.

His game-day statistics are just as impressive as his charisma and leadership on the practice field, with 755 passing yards and 51 passing completions in his four starts for the Royals.

“Jake is able to narrow his focus down to what’s important for each play,” said offensive coordinator Greg Peterson. “He holds himself to a high standard because of his strong competitiveness.”

Although it’s easy to get absorbed in the statistics, the clamor of the student section, and the expectations held by the fans, Marsh plays for a different reason.

His eyes widened as he reached into his pocket and opened his black faux leather wallet. Underneath his boating license, a baseball card of his former coach, and a wrinkled purity card that he signed in middle school, he slipped out a white card with the words, “Who’s your King?” written in thick, black letters.