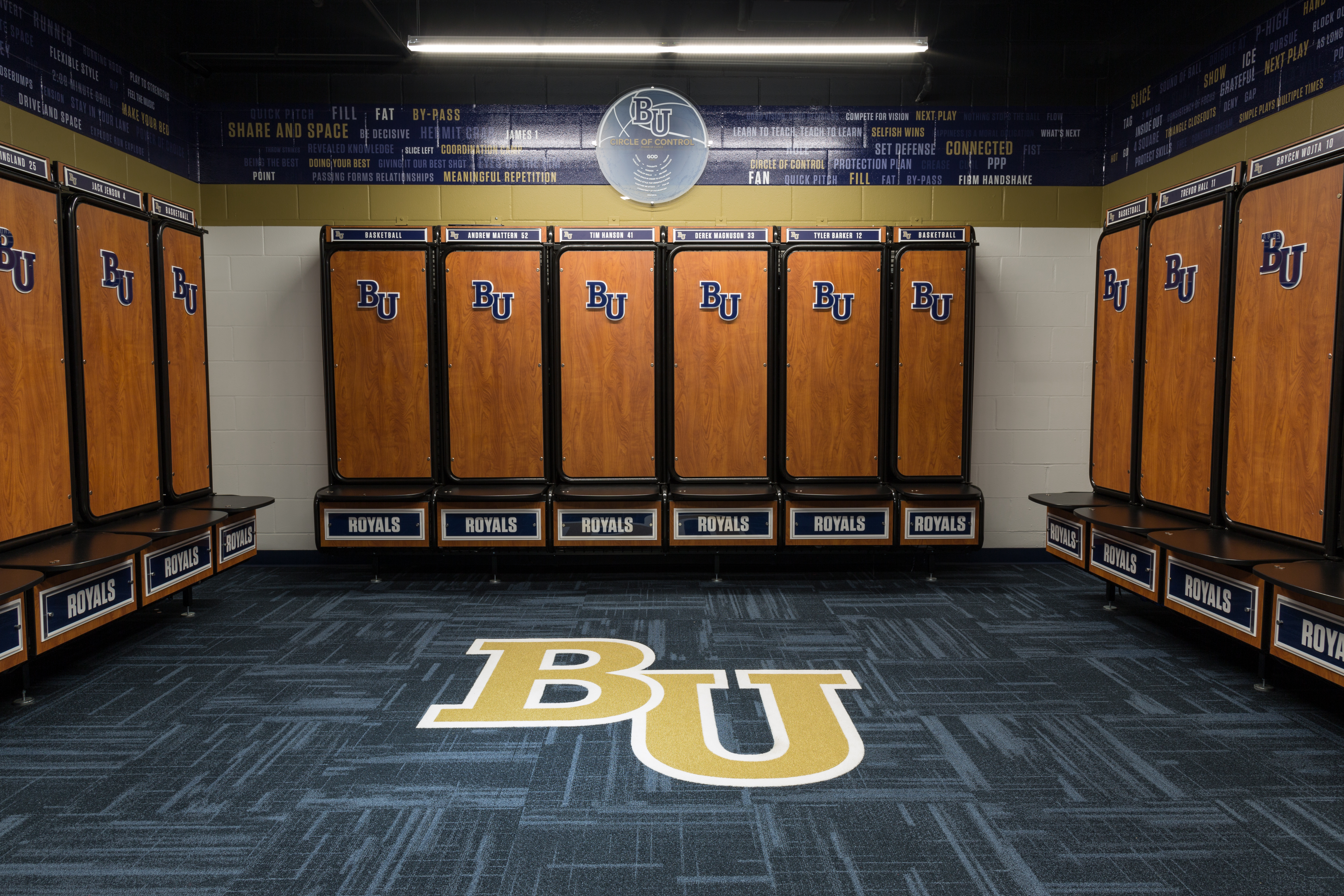 A closer look at Bethel’s athletic locker room renovations and how the size difference between men and woman’s facilities is compatible with Title IX.

A quick look into the men’s and women’s locker rooms at Bethel reveals new lockers and the BU emblem on square striped carpeting. But striking differences exist between the men’s facilities and the women’s: the size and space. Men’s athletics currently have three varsity locker rooms compared to one for female athletes. The three rooms are designated for football, men’s basketball and other remaining men’s sports. For women, one varsity locker room was built for all female athletes. An equal, day use locker room exists for both men and women.

This 3:1 ratio of women’s and men’s varsity athletic locker rooms may seem disadvantageous. However, according to Title IX Coordinator and Chief Human Resources Officer Cara Wald, the layout and number of rooms do not present any Title IX violations. Multiple considerations regarding equity went into the roughly four month project to construct the locker rooms.

In the late spring of 2015, donors approached the athletic department to discuss the needs of the student athletes. With the Wellness Center in motion, the athletic department wanted to arm the student body with a new set of locker rooms. Athletic Directors, coaches, project managers and architects gathered to discuss the needs of the athletes before students moved in for their regular seasons.

When considering the current, final number of locker rooms, Wald said it is first important to know the project was a renovation rather than a building plan. In other words, the construction site wasn’t a blank slate. Certain load-bearing walls and existing plumbing didn’t allow some areas to be changed completely.

As head coaches and builders conversed, different needs for the male and female athletes were voiced, according to Assistant Athletic Director and Head Volleyball coach Gretchen Hunt. For men, more space and an adequate number of lockers for athletes to keep all year was first priority. While female athletes have always had enough room, many men’s teams were often kicked out of the locker room while visiting teams played during the overlap of seasons. With the new men’s varsity locker room blueprint, no team is forced to leave and every male athlete has a personal locker for the first time in 20 years.

According to Hunt, the main priority for the women were the bathrooms . A hardly used group shower occupied the former locker room, running with water that Hunt described as “cold no matter how long you would run it.”  Creating individual showering facilities and space for both junior varsity and varsity teams formed the existing footprint size. Wald explained that although female athletes may not have a comparable number of locker rooms as their fellow male athletes, the women are allowed a bigger sized locker room because of this opportunity for private showers.

Plumbing was also a large factor in the final construction, as three out of four of the men’s current locker rooms feed into a central group shower. Therefore, Wald said it wasn’t possible or appropriate for any women’s sports to occupy these rooms.

“We kind of came to the conclusion that (doing the) same for everybody is not what Title IX demands. It demands everybody has really equal access to the resources that they need. Now all athletes can have their own locker.” – Gretchen Hunt, Assistant Athletic Director and head Volleyball Coach

Hunt said those involved in the beginning stages of the renovation project had conversations regarding Title IX.

“We kind of came to the conclusion that (doing the) same for everybody is not what Title IX demands. It demands everybody has really equal access to the resources that they need. Now all athletes can have their own locker.”

In providing context for the number of locker rooms, Wald illustrated the three-pronged approach to Title IX for athletics. First, there must be a proportional number of sports for women and men. Second, the needs of the student body must be met and third, gender equity must be recognized when adding sports to the department. According to Wald, all aspects of the approach were met in the locker room renovation. Student athlete needs were granted, and additional lockers for both sexes were built in case of the addition of sports teams in the future.

“I’m not that frustrated about it,” Klassen said. “I kind of want to know the reasoning behind it, but I understand they have bigger sport teams.”

Other students, however, are less impressed with the renovation.

“When I heard they were going to be redoing the lockers I was pretty excited,” Halle Marr, 2016 Bethel graduate and former track and cross country captain said. “I remember seeing it (the lockers) for the first time and seeing the murals and thinking “Wow they’ve done a lot of excellent work.” And then going to the women’s lockers and seeing an empty wall and no murals. I was really disappointed because clearly they put all this effort into the men’s locker room and their rooms are ten times bigger than ours.”

Marr cited quality of the locker rooms as another source of her concern.

“If you walk into the locker room, it’s a night and day difference. If you look at the football rooms, it’s like a shrine,” she said. “I don’t think you could say the quality of the interior space in the women’s locker rooms is equal to the men’s.”

For others who are upset about the final design of locker rooms, Hunt wishes students to know the project was a short turnaround and not a new build. She also notes that many are likely unaware this is the first time in Bethel history male athletes haven’t been moved out of their locker room space in the middle of the season.

“I think that there’s maybe female athletes who don’t understand what their male athlete counterparts were doing for a really long time,” Hunt said. “And that it’s not their fault there’s more of them. There are a lot of them and we need to create space for them.”

Wald encourages students with concerns over the locker rooms to talk to athletic directors or Vice President for Student Life, Dr. Washington.

“I would always encourage students that have questions or concerns to come forward and dialogue about those concerns,” she said. “Perhaps there’s information we can share that might just help explain.”

0 comments on “The locker rooms, explained.”