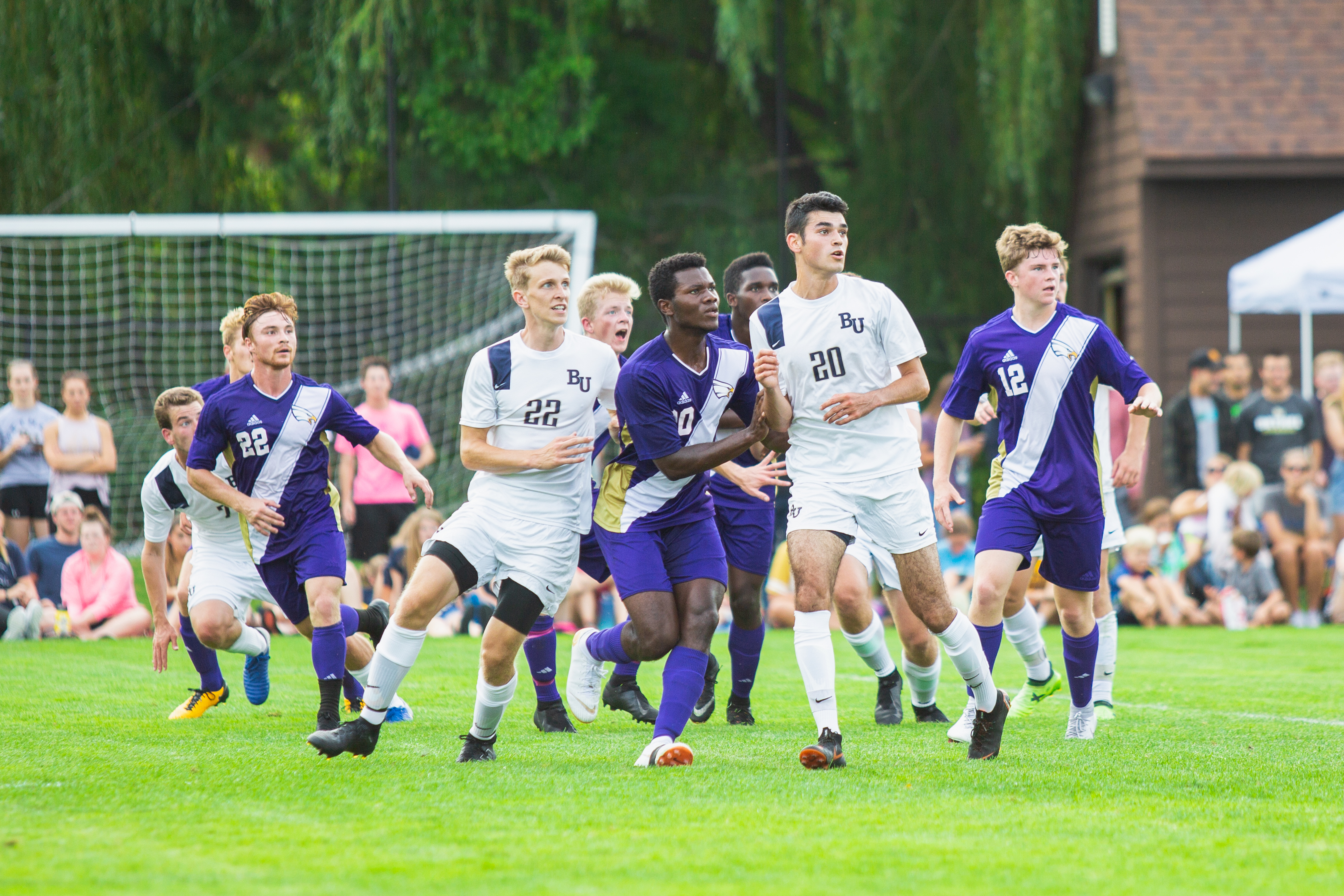 A packed Ona Orth Complex came to watch the Bethel men’s soccer team win their home opener in dramatic fashion Friday afternoon. The game-winning goal by Brandon Martinez came in extra time. Bethel and the University of Northwestern St. Paul played the 90 minutes of regulations to a 0-0 tie before Martinez’s chop shot over Northwestern goalie Austin Gunkel to seal the victory.

“It was a game where we really had to grind,” senior defenseman Thomas Redden said. “We knew Martinez would be able to give us a chance whenever he gets the ball.”

Bethel shined on the defensive end of the field, giving up only two shots on goal and only four shots total. In the second half Bethel thought they had scored a goal when Andrew Zwart kicked a nice cross into the back of net. The referee blew an offsides call and the game remained scoreless.

The Royals pounced quick in extra time scoring the game-winner in the 96th minute.

“I was really proud of our effort today and thought the guys showed some character in a hard fought contest,” Coach Jeremy Iwaszkowiec said.

Freshman Colin Hupert injured himself in his first start in the goal for the Royals when Northwestern captain Joshua Hintz ran into him in the second half. Freshman Brant Weiber came in to complete the shut out for the Royals. Both keepers recorded a save.

“We need to clean up some areas for certain but today was a good start,” Iwaszkowiec added. “We need to get healthy and have a quick turn around with a full schedule of games next week which will hopefully prepare us well for the MIAC.”

The men’s team is off until Labor Day Monday when they travel to Simpson College. They return to the Ona Orth Complex on Thursday Sept. 6 at 2:30 pm to host Bethany Lutheran.

Bethel women’s soccer also celebrated a comfortable win at Northwestern, beginning its 2018 campaign with a 3-0 victory.

Britney Monteon, a transfer senior, scored her first goal as a Royal to kick off the start of the Bethel women’s soccer season with 30 minutes left in the first half.

Then with 25 minutes left, standout freshman Tessah Anderson booted a goal over the University of Northwestern goalie Samantha Colombo’s head, putting the Royals up 2-0 early on.

No advances by Northwestern were made for the rest of the game, and with 56 seconds left Montenegro scored her second goal after Northwestern pulled its keeper.

Next the Royals travel to Augustana (IL) on Sunday Sept. 2. They play their home opener Thursday Sept. 6 against Bethany Lutheran at 4:15 p.m.