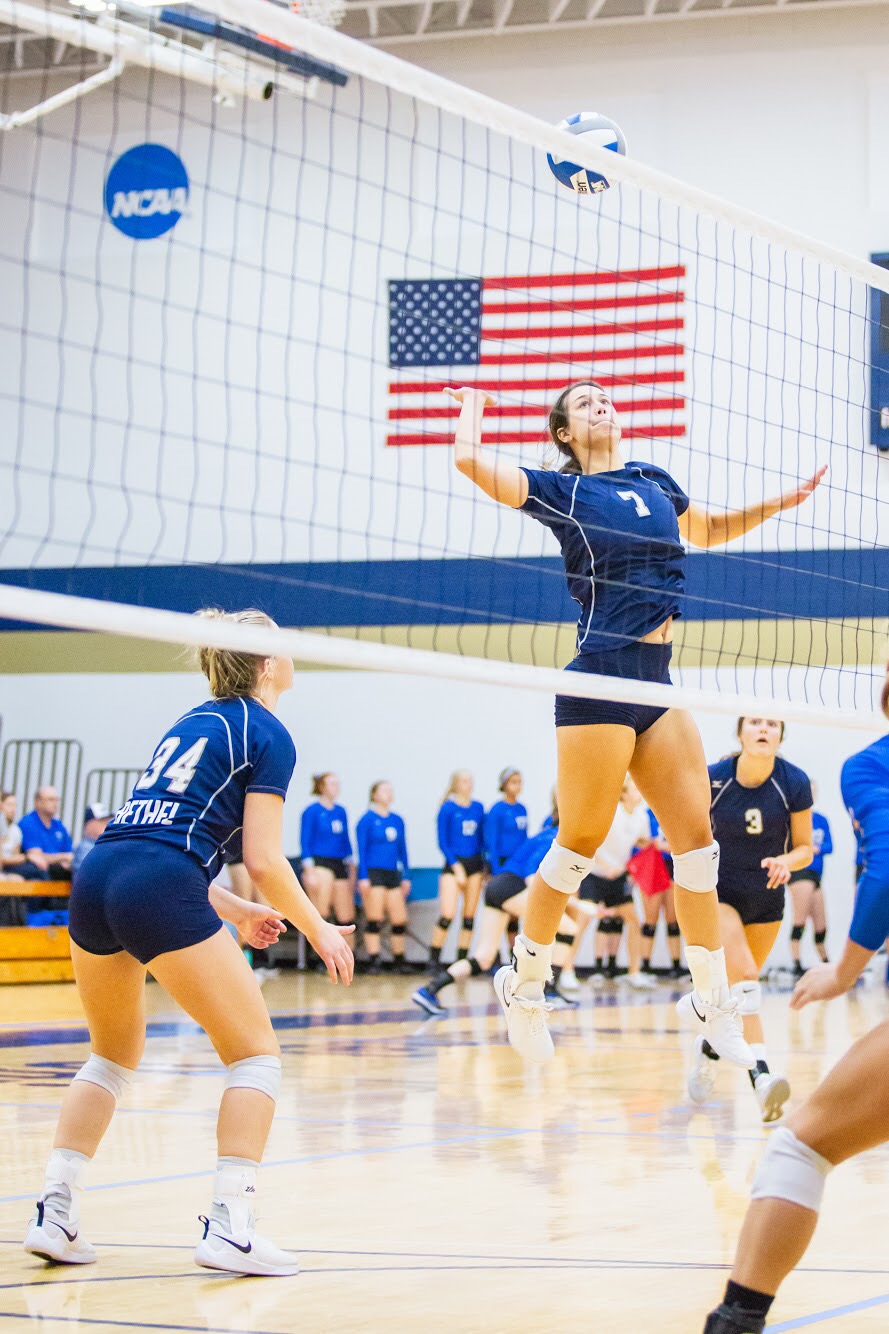 Balanced attack leads to success in match one

The Robertson Center was once again packed Saturday afternoon with a collection of teams and spectators coming to watch the Bethel Invitational. The first match of the afternoon began with the Bethel Royals taking on the Luther College Norse.

The match began with the Norse getting off to a 4-0 lead, but the Royals, as they have done often so far this season, responded by going on a 25-7 run and eventually running away with the first set by a score of 25-11. Senior middle blocker Karin Canakes had four of her team-high 10 kills in the first set, while sophomore right side hitter Macie Gavic was also a key contributor with four first set kills.

As dominant as the first set turned out to be, the second was quite the opposite. Just like the beginnings of the opening set, Luther got off to a 4-0 lead. However, this time the Norse did not roll over and give up the lead so easily. The momentum stuck with Luther and they used it to execute their game-plan well enough to get out in front 20-16 late in the set. But when the set was on the line, the Royals delivered once again. Sophomore middle blocker Maria Claflin had two crucial kills and a timely block in the final four points of the set, leading the Royals to a 25-23 come-from-behind set victory.

After surviving the second set, the Royals never looked back going into the third, winning the set 25-16. The combination of a stifling defense and timely kills and dumps proved to be the difference in the set, with Bethel holding on to all the momentum and seemingly never losing any control.

The Royals extended their winning streak to five games by defeating the University of Wisconsin-Stout Blue Devils in the second game of the afternoon doubleheader. But what is most impressive during this winning streak: they haven’t even dropped a single set. That continued against the Blue Devils.

In the first set, the Royals and Blue Devils went back and forth for the majority of the points, until two kills by Claflin, a clutch dump from freshman setter Hannah Wilhite and a set-winning kill from Canakes ended the Blue Devils’ hope of getting out to a lead in the match, winning the highly contested set 25-22.

Defense was the name of the game in the second set. Junior defensive specialist Dominique Dabu lived up to her title by diving on the court multiple times, with a team-high 17 digs, to extend rallies and set up her team with chances to go on the offensive attack. Hoppe eventually shut the door on Stout’s chance to get back in the set with two kills in the final three Bethel points of the set, won by a score of 25-18.

With the Royals one set away from an undefeated weekend at home, they once again relied on their experience and depth. As the set was hanging in the balance at 20-20, the seniors Hoppe and Canakes showed why experience matters so much at this level. Hoppe and Canakes combined for three kills in the final five Royals points, aided by the sophomore Gavic and her final, loud kill of the match that sealed the set, the match and the undefeated weekend for the team by a score of 25-22.

0 comments on “Royals Too Much for Norse, Blue Devils in Day Two of Volleyball Invitational”