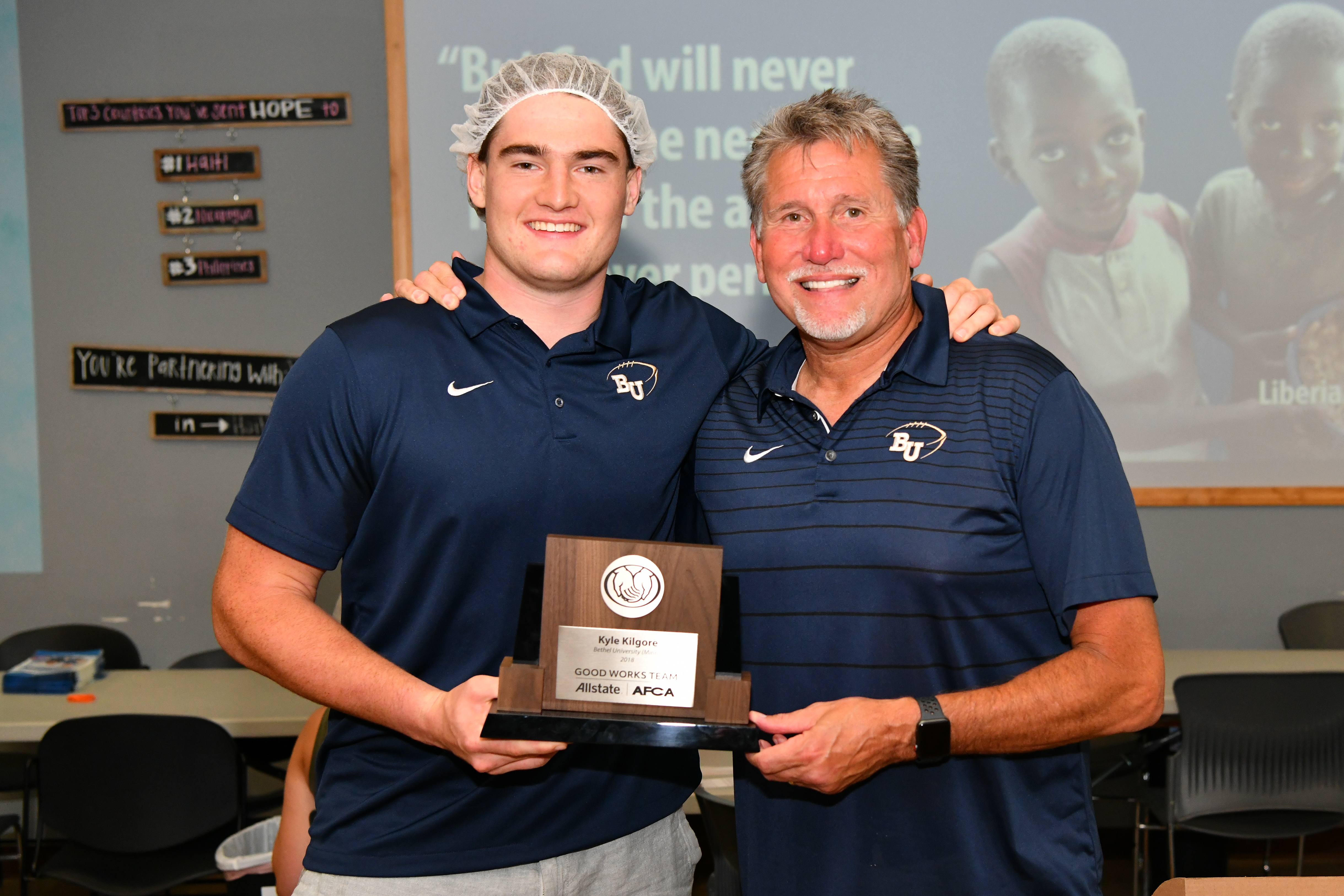 Senior defensive end Kyle Kilgore walked into Feed my Starving Children surprised to find his family, teammates and coaches congratulating him. Kilgore had just been named to the Allstate Good Works Team, an award given out by the American Football Coaching Association to 22 college football players who make a commitment to making an impact off the field. It is the sixth year in a row a Bethel football player has won the award.

“This is far more important to me than anything that happens on the football team,” Kilgore said. “And it speaks to what Bethel football is, which is more than just football.”

On the field, Kilgore has made his mark in MIAC. He was a one-time defensive player of the week and one of the leaders in sacks last year. Kilgore has quarterbacks across the MIAC shaking in their cleats when he lines up opposite of them.

His long hair flowing in the wind as he rushes the quarterback, Kilgore’s mane puts fear in opposing backfields. But last week at Feed my Starving Children the mane was put in a hair net, and instead of feasting on quarterbacks, Kilgore made sure children who are hungry could just eat.

“Feed my Starving Children does an awesome job of reaching out to communities who are missing their nutritions so they can learn better in school,” Kilgore said.

As a part of the award Kilgore was invited to go to New Orleans in January and attend the Allstate Sugar Bowl where he and the rest of the 22 members of the Good Works Team will be honored at halftime on the field.

Kilgore has been on multiple mission trips and has volunteered at numerous nonprofits and schools, all of which helped him win this award.

“He is just giving his heart away,” Bethel coach Steve Johnson said.

Kilgore is the type of guy who comes early and stays late for film, lifts and serving others. While his roomates are watching Netflix, Kilgore is watching film. As a teammate he helps the defense get off the field so the offense can go out and score.

“His impact as a defensive player to impact the offense is special,” senior offensive lineman Jake Wynia said. Wynia and Kilgore were roommates on the second floor of Edgren Hall freshman year. Now as seniors they live in the same house together off campus.

Whether he’s chasing down a ballcarrier in Royal Stadium or packing rice, soy, protein and veggies into meal bags at a warehouse, Kyle Kilgore does it with a servant heart. The Allstate Good Works Team award reflects that.