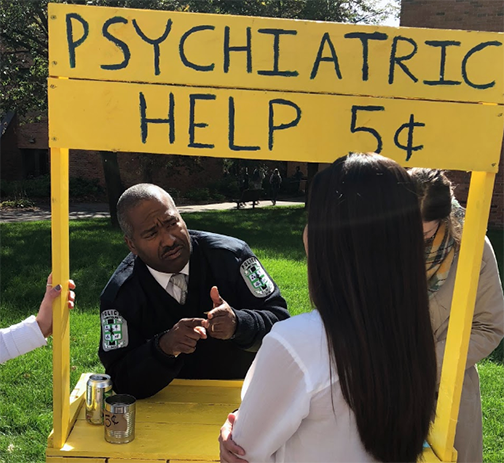 By Mackenzie Novak, for The Clarion

Dr. William Washington set up the bright yellow psychiatric help booth Tuesday, awaiting 11:30 a.m.. The aromas of a nearby food truck fill the air, calling students’ names, but it was quiet and chilly. As it gets closer to 11:30, more students begin to walk through the courtyard. They glance around, noticing the abnormal setup in Kresge Courtyard. Some keep their heads down as they rush to class while others walk through the strip with their eyes wide, drawn to Washington, the Vice President for Student Life at Bethel University, behind the  booth.

The jar for nickels sits there, waiting to be filled. Under the sign that reads, “Psychiatric Help, 5 Cents” stands Washington, smile wide across his face as students line up to approach him. If students don’t have a nickel, classmates lend one.

Washington sets up his psychiatric booth replica from Charles Schulz’ “Peanuts” comics multiple times a year, and those bold enough to ask him a question will leave the booth with a message filled with a God-directed answer.

Sophomore Makenna Pearson took the initiative to ask Dr. Washington a question concerning her major. She was given a definitive answer.

“God always will give you direction to your destiny,” said Washington, who earned a bachelor’s degree in history from Trinity College, a master’s from Trinity Evangelical Divinity School and a Ph.D. in higher education from Loyola University of Chicago. “Just look for him, and he will answer.”

Each time a student dropped a nickel in the jar, he took a step back, did a spin and waved his hands in the air. He yelled, “All right, all right!” and stepped back into position behind the booth, ready for the next student.

Washington regularly walks through Bethel hallways calling out to students by name.

“He walks through campus and gives everyone knucks and asks how each student is doing. He genuinely cares,” sophomore Makenna Pearson said.

He set up the booth partly because he wants to create a chance to interact with students outside of the office, all while making it fun. He’s also a huge fan of Charlie Brown.

“I cry like a baby whenever I watch (A) Charlie Brown Christmas,” he said.

0 comments on “What a nickel can buy”