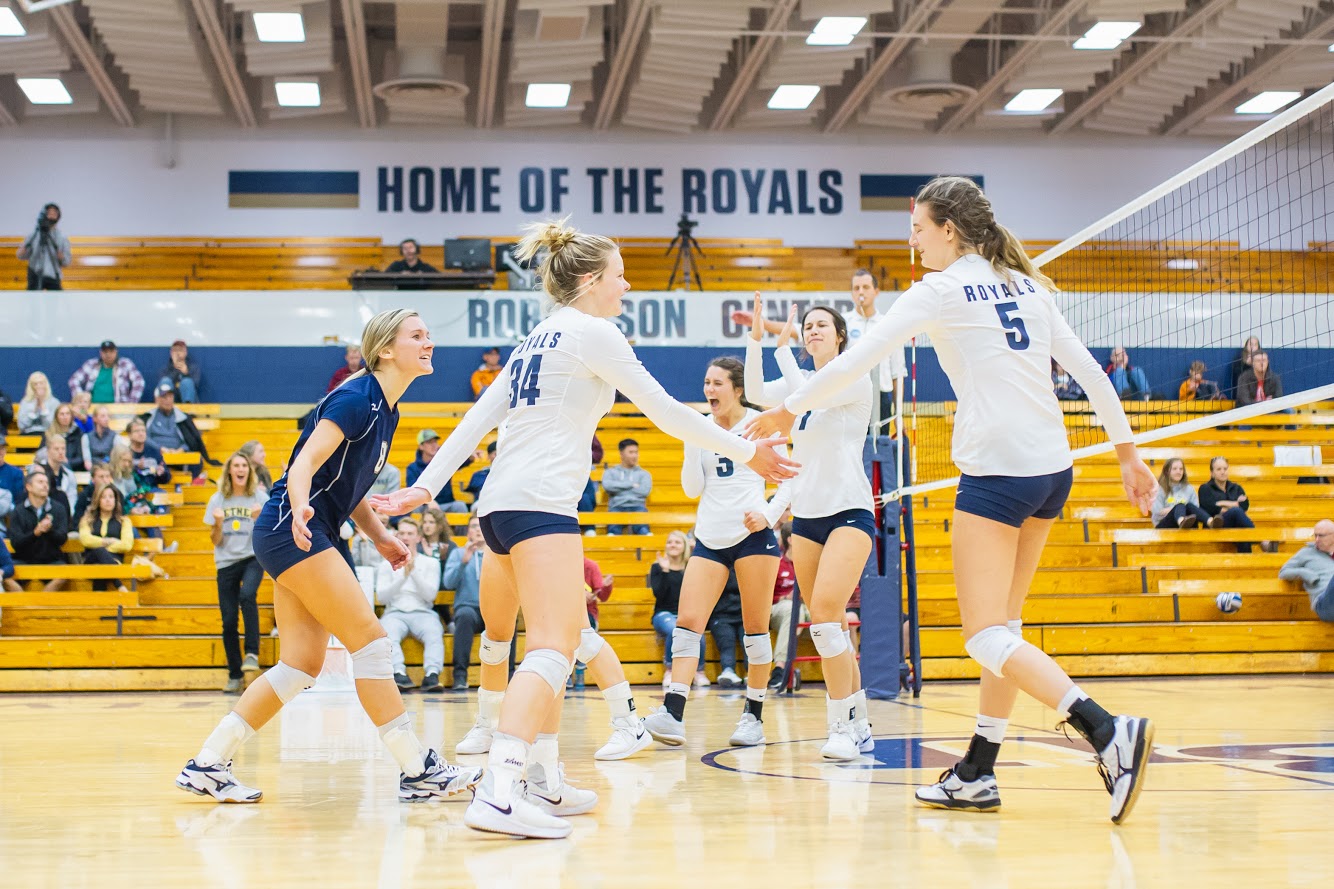 Bethel starts hot, but Augsburg rallies from two sets down to stun the Royals in round one of the MIAC playoffs.

In an electric atmosphere Tuesday night at the Robertson Center gym in Arden Hills, the fourth-ranked Bethel Royals volleyball team began its postseason taking on the fifth-ranked Augsburg Auggies.

From opening serve, the Royals supporters made their presence known, with thunderous applause and roaring cheers for their squad in what most likely would be their final home game of the year.

As the match commenced, the Royals wasted no time getting out to a quick lead.

Sophomore right side hitter Macie Gavic pounded two kills back-to-back to get the crowd fired up and bring energy to her teammates. Sophomore setter Ellie Hoyt also contributed to that momentum, landing two consecutive aces in the set. Freshman setter Hannah Wilhite provided three straight kills in the middle of the set, as well as 10 assists and three digs. Everything was rolling for the Royals in the opening frame, leading to a 25-20 set win.

The second set was the epitome of a back-and-forth stalemate, with no team having more than a three point lead in the entire frame. Senior outside hitter Brooke Olstad and sophomore middle blocker Maria Claflin both contributed five kills in the set, with fantastic team defense backing them up. Hoppe and Wilhite both tallied six digs in the frame, setting up long rallies and gritty defense.

As the set was nearing its conclusion, no team could take the two point lead and claim the victory. Bethel saved four set points in overtime, and finally, thanks to Olstad’s back-to-back kills, took the marathon set by a score of 30-28.

In the third set, the Royals were riding high to begin with, using the momentum from the previous dramatic set win. But, as points progressed in the set, Augsburg was gaining momentum of its own. Their newfound offense and attacking mindset led to several Royals mistakes and the Auggies feasted off of them. With their playoff lives on the line, Augsburg managed to survive the third set 25-21.

Now with some confidence and swagger of their own, the Auggies continued rolling in the fourth set. Using their revitalized energy to overwhelm the Royals, the Auggies fans were making some noise as they felt that their team had a chance to make this a match again. The once-solid front line of Bethel was showing holes and being outmatched by Augsburg, en route to a 25-19 Auggies set win, forcing a decisive fifth set.

As the stunned Royals fans took to their feet to begin the final frame, the Auggies did not let their foot off the gas. They roared out to a quick 7-2 lead, with violations and errors being Bethel’s demise. However, as was the trademark for the Royals all year, they were resilient. Hoppe brought the once-silent Royals crowd to their feet with a powerful kill and a fist pump to make it 8-4. Her block to trim the lead to 13-11 also caused the fans to erupt with screams and cheers as their comeback attempt seemed to be in full force.

However, the Royals were left heartbroken, when down 14-13, sophomore outside hitter Allie Fauth uncharacteristically served the ball into the net, ending the set, the match and the season for the Royals.

Fauth ended the match with 36 digs.

Hoppe had a match-high 19 kills in her final collegiate match, followed by Olstad’s 14 kills and team-high 21 digs in her final match as well. Wilhite provided 42 assists and 16 digs, while Claflin and Gavic added 13 and 12 kills, respectively.

But, after a gut-wrenching defeat, head coach Gretchen Hunt was impressed by their character of the entire season.

“We [the team] have been through a lot together,” Hunt said.

From the bus accident they were involved in to the close matches all throughout the season, she noticed a constant trait in every situation.

“The defining thing is their resilience, their ability to bounce back,” she said.

Congrats to the Royals volleyball team on a great season.

2 comments on “Auggies stun Royals with comeback in playoff opener”