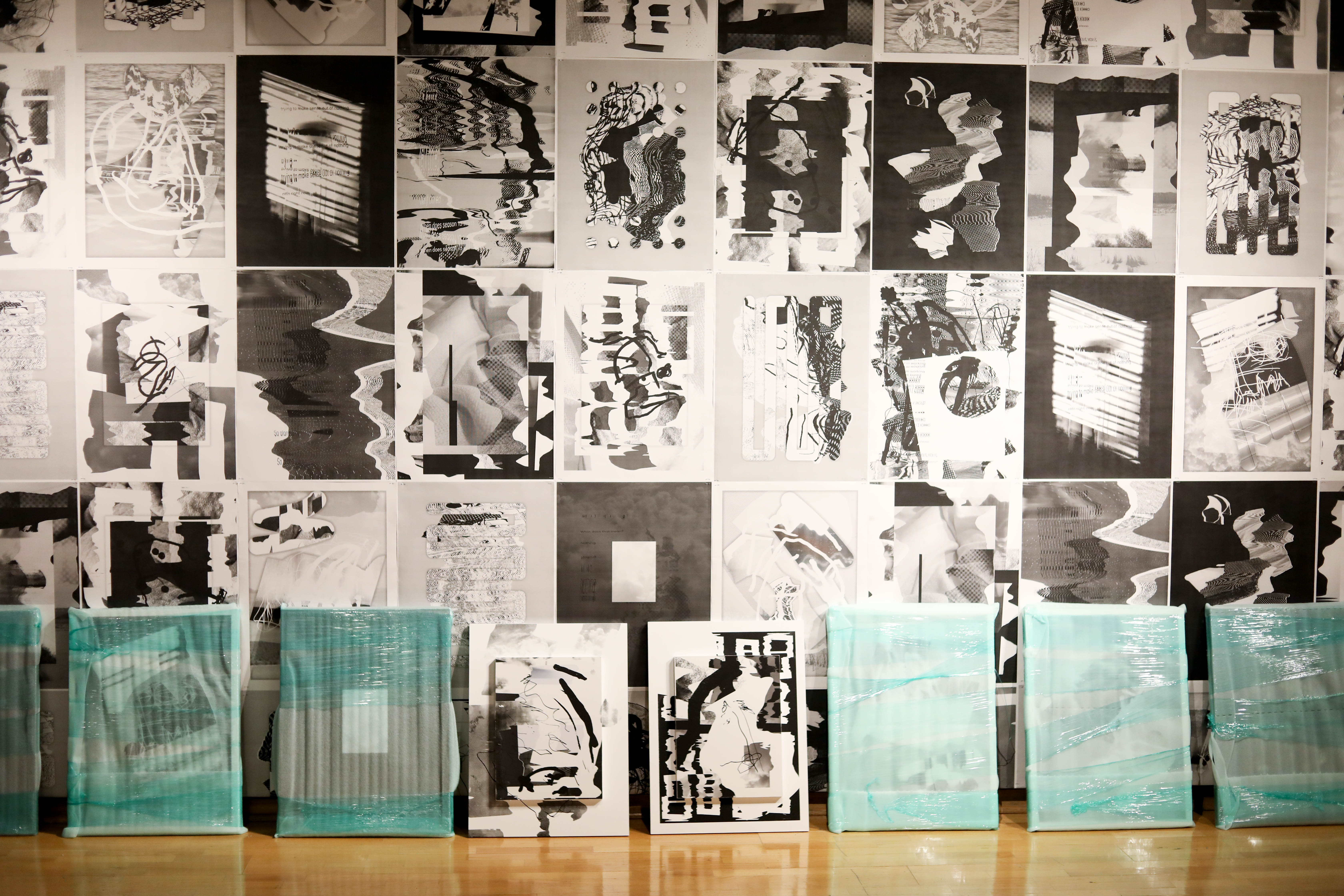 Family members, friends, students and faculty crowded into the wooden encased Eastlund Room Nov. 8. The original setup of 98 chairs was not enough for the endless line of supporters streaming through the double doors.

“Some of us when we go on sabbatical will rest, but Jess just made a lot of artwork,” gallery director Michelle Wingard said. “So much artwork that our entire gallery is Henderson-ified.”

With the help of faculty development and alumni grants, design professor Jessica Henderson was able to complete the Johnson gallery exhibit “uhhh, u there?” during her time off on sabbatical spring 2018. The collection explored the half-and-half nature of her exposure to technology: half of her life free from it and the other half absorbed and surrounded by it.

From her first Internet search for Mad Magazine to her recent iPhone search history of how to spell somebody, the amount of technological interaction has grown immensely during the second half of her life.

“There’s no turning back, so I feel like I have to ask if these tools are making me a better human or a worse one and if it’s the latter, what do we do with that,” Henderson said.

As a Bethel graduate and Minneapolis College of Art and Design (MCAD) alum, Henderson was captivated by philosophical drawings and diagrams, interested in the residue of thinking that they left behind.

In 2016, Henderson started exploring materials and experimenting with physical possibilities. The appearance of an object disrupting the surface and utilizing multiples or iterations of the same thing are both techniques that she liked the aesthetic and meaning of.

Art professor Amanda Hamilton shared studio space with Henderson while she was in the process of creating this work. Since Hamilton was still teaching during Henderson’s time off, she felt as though there was an entirely new collection of work created every time she walked into the space.

“Thinking through making rather than thinking through planning or sketching, which is the struggle we’re always talking with our students about as well,” Hamilton said. “I swear she made everything that came into her head. There was so much work.”

Seeing the progress of Henderson’s work through every small alteration helped Hamilton have a deeper appreciation for the minor changes that other viewers might not have even noticed.

“She really pushed the work and pushed herself,” Hamilton said. “I think just as objects they’re really beautiful, as well as having really compelling ideas.”

Many of the abstract line elements in Henderson’s pieces were drawn by her two boys, Walker and Davis. Even if her children never pursue an artistic career path, Henderson still wants to expose them to their natural ability to be creators.

“Actually, all of these are my favorite,” Walker said as he gazed up at his mom’s work hanging in the gallery.

During her semester off, Henderson had the boys help her scan papers and organize collages for more hands-on interaction with her work.

“My mom put some art pieces and then it takes pictures of it,” Davis said. “I think I made them look good.”

This fascination starts in childhood and often sticks with people as they move throughout life, resonating in different ways.

“I’m drawn to these marks as stand-ins for the mark maker, as evidence of thinking, wrestling, tracing, ordering: the human elements,” Henderson said.

She often aims to unpack indirect messages and sits with the bigger questions. Henderson encouraged students in the audience by saying that even distinguished artists are asking if art really does anything practical or if it’s just something nice to look at.

“These things don’t go away when you get better, they just change,” Henderson said. “Sometimes these things still puzzle me, but I do know that art allows me to consider what it feels like to be a human.”