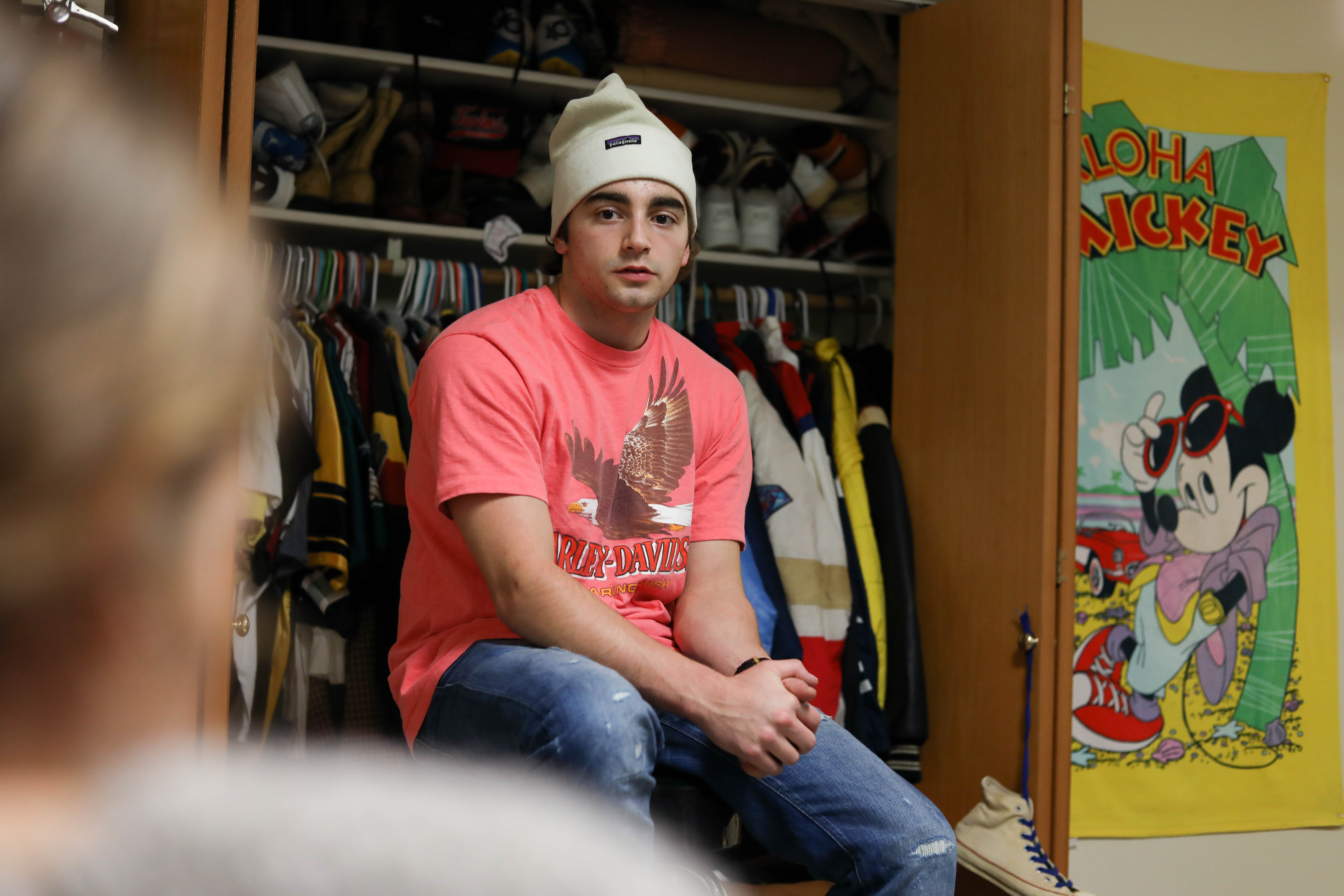 Sophomore Zach Fisk runs an Instagram Clothing account that will one day lead to a brick and mortar presence.

It was all about the hunt. For 5-year-old Zach Fisk, it was about the hunt for Fisher-Price Rescue Hero action figures that were no longer being made. His parents, Paul and Heather Fisk, started taking him around to different thrift stores to find these toys.

“It was a hunt. The joy of finding something,” Fisk’s mother, Heather, said.

Now at 19 years-old, sophomore business major with an entrepreneurial focus, Fisk has turned that hunt into an Instagram-run clothing store called Thrift-fil-a where he buys and sells used vintage clothing.

Fisk grew up in Bothell, Washington not far from Seattle. Besides starting to buy toys and electronics from thrift stores at a young age, Fisk had a natural knack for selling too.

“We had a garage sale and he loved it,” Heather said. Fisk would run down to the sidewalk and try to convince as many people to come as he could. He would bargain with people and tell them all about the product, not just his own toys, but anything that they were selling.

“We did a lot because we knew he liked it,” Heather said. However, with both his parents working full time they were unable to drive Fisk around every weekend like he wanted.

When Fisk was 12 years old, his mom opened up an eBay account to sell some items. She encouraged Zach to buy some toys at the thrift store that he could sell on there and she helped with it.

“I needed money when I was a preteen so I started selling my grandma’s old stuff,” Fisk said. He would also bike around to garage sales and continue to be taken to thrift stores to find old electronics and toys to sell. Anything that he thought could make him some money.

His mom said his business really started to take off when he was able to drive and could transport himself to the thrift stores.

His parents were, and still are, very supportive over his decisions to follow his dreams at such a young age. “It brings me joy that he is doing something that he enjoys,” Heather said.

Fisk found his way to Bethel because his dad came here and so he came here to play basketball. He dropped basketball after his first season to devote more time to school and his business.

Oct. 15, 2017 Fisk took his childhood business to the next level when he created his Instagram account, @thriftfila. Just over a year later, he has almost 12,000 followers and posts new products daily.

“It’s really easy. Honestly, anyone could do it,” Fisk explained. “I just took it to the next level.”

His key items to look for are old band tees, vintage levis and cool jackets.

“I am thankful that I can call myself a ‘90s baby,” Fisk said. “I was born in ‘99.” He found his niche in preserving the ‘90s.  “There is a whole culture around the ‘90s,” Fisk said. “They don’t make them like that anymore either.” Fisk also tries to buy things that were made in the United States.

Just like he has been doing since he was 12, Fisk is successful in his business by building on his investment.

Knowing the key items that his consumers want, Fisk goes out to Thriftstore, Garage sales, businesses, and other thrifters to find those items. He logs them all into a spreadsheet where he keeps track of his items.

He is constantly buying and selling clothing, shoes and other apparel, making sure to not hold onto anything for too long that would hold up his investment.

While Fisk is still early on in his education here at Bethel, he said he is learning how to better market his items to the consumer in his Principles of Marketing class.

Professor Maryann Harris of the Business and Economics Department teaches that class. Harris shared some of the draws to social media businesses in our generation.

“I think the generation he is marketing to, that generation you grew up on it. It’s how you consume life,” Harris said. “For an entrepreneur, it’s powerful stuff. You don’t have to be a big organization that has all these resources and capital and relationships already established. You can just get going.”

Harris said, “If you have something relevant that people are interested in and you’re a hustler, you make things happen, you can get people to come to you.”

And that is exactly what Fisk does. His clientele ranges from local college students to all across the world. He recently shipped a few hundred dollars worth of product to the United Kingdom and will be having Japanese buyers visiting soon.

Fisk’s goals go far beyond just having an online presence. “The end goal is going to be a shop with two other homies where we are just in there buying, selling, talking vintage clothes all day. It’s going to be fun.”