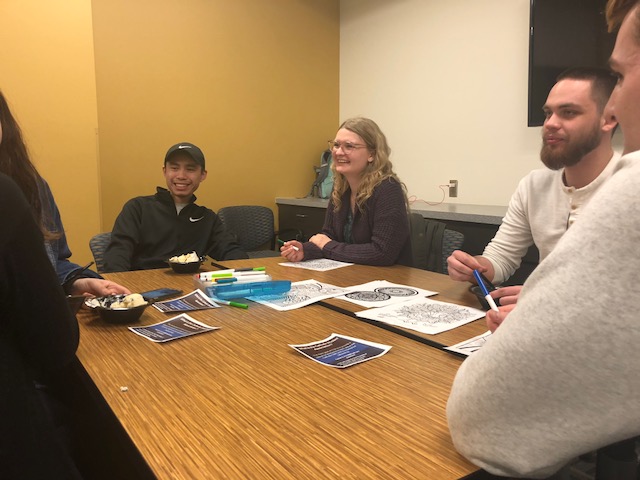 After months of organizing, a new Catholic-centered club on campus begins.

If you walked into The Loft on the fourth floor of the Brushaber Commons last night, you would not have heard silence. Sounds of laughter, worship music and tumbling Jenga blocks bounced off the three walls and garage door.

For a campus that prides itself on instilling Christian values, this is the first Catholic-centered club being offered to students.

Since the university doesn’t provide a designated shuttle to any mass service, junior elementary education student Grace Nichols wanted to make a group that reached out to Catholics on campus. When she came to Bethel as a freshman, Nichols found that she was not fitting in. As a Catholic, she felt marginalized.

She felt that in some courses taught at Bethel, the curriculum spoke negatively towards the Catholic church. In one instance, she was told that she was going to hell because she was Catholic.

This prompted her to initiate discussion around campus about starting a club. A club aiming to reach out to students in need of a space to belong.

Senior business and marketing analytics student Andrew Mattern voiced his appreciation for this new space where Catholics can gather and feel connected.

“I want this to be a place where people can come and grow in their faith and meet other people who are Catholic,” Mattern said.

Nichols said that the hope for CSA is that it will help spark conversations between students of all denominations on campus.

“The whole message [of the club] is that Catholics are Christians too,” Nichols said. “This is meant to be a space to ask questions and be open to discussion.”

0 comments on “Catholics in community”