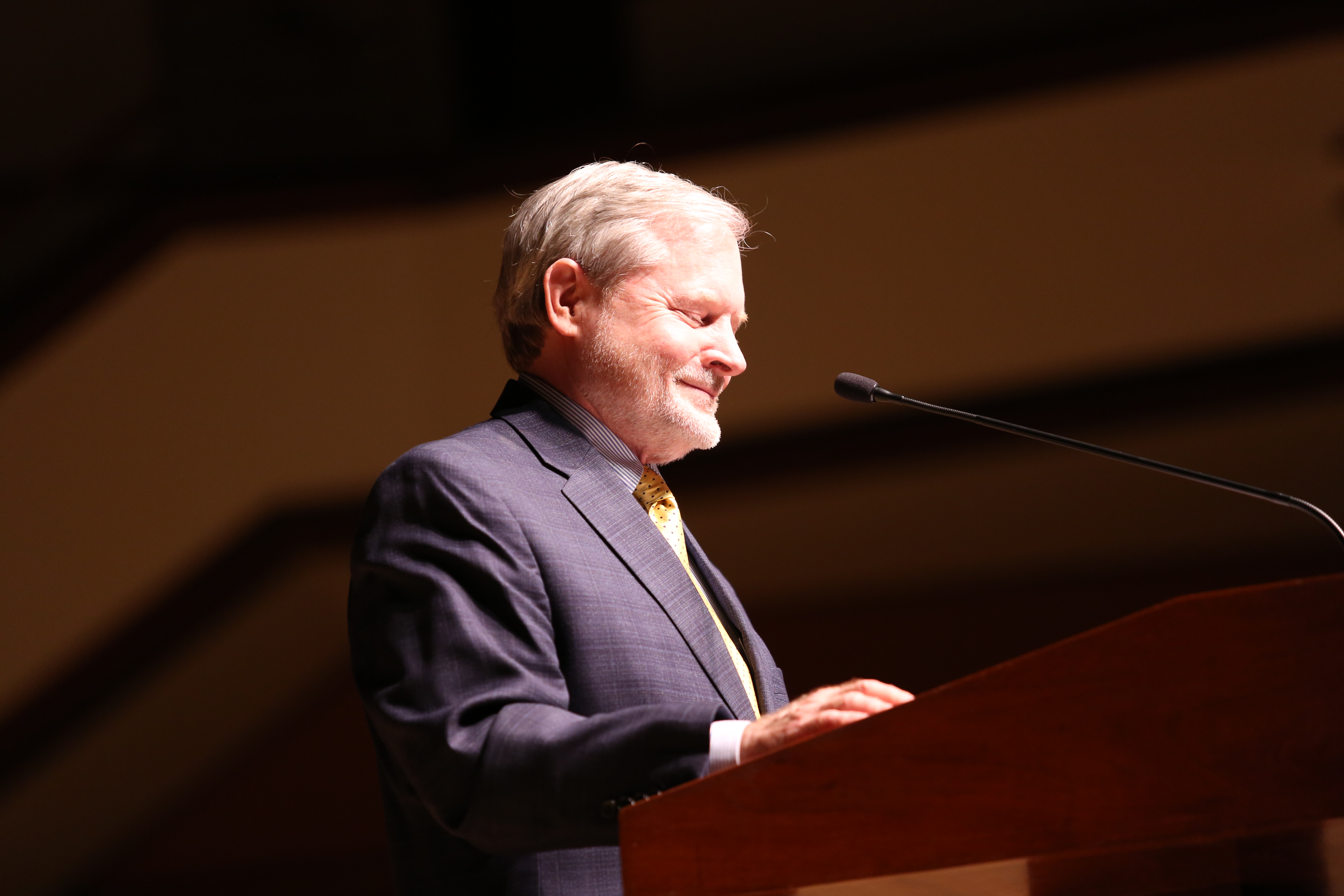 Jim Green, former board president and current board member, is heading the search committee for the next president.

Prior to the announcement, Benson Great Hall bustled with nervous excitement as faculty, staff, administration, board members and students gathered for an unusual event.

As Barnes took the stage, photos flashed across the screen of himself, evolving from a youthful provost to a bald, photoshopped version of himself.

March 5, a community gathering will discuss the next steps.

“I know that we have more financial decisions to make and I don’t want to leave those for my successor,” Barnes said.

“Serving Jesus is not about comfort,” Barnes said.

He used an analogy often spoken in commencement speeches, challenging the audience to continue looking higher. Barnes expressed that Bethel’s best days are ahead, so we should keep looking for ways to give honor and praise to Jesus through everything.

According to the Bethel University news release, Barnes said,  “As I reflect on my career, I am thankful to God that Barb has walked with me through the good times and the difficulties of life and work,” said Barnes. “It has been a blessing and one of my life’s greatest joys to serve and be a part of the Bethel community.”

The release also noted that as provost, Barnes led the educational team of three schools and helped to navigate the shift from Bethel College and Bethel Seminary to Bethel University in 2004, and he established the Edgren Scholars program that allows faculty and students to receive grant money for summer research projects.

Barnes received a standing ovation as he hugged Julie White, President of the Board of Trustees, and walked offstage.

Levi Broersma, a freshman business major, came to the chapel not knowing to what to expect.

“I knew something was happening… but I didn’t think he’d be retiring,” he said.

Broersma said even though there’s uncertainty about who will be the next president, he is confident that Bethel will still be in good hands.

“Obviously they [the search committee] is going to look for the best candidate to fill the job,” Broersma said. “Whatever they’re doing, they’re trying to pursue what is best for the students. I’m still looking forward to the future of Bethel.”

Lily Klenk, a sophomore political science and international relations double major, was not caught off guard when the news broke. “I wasn’t really surprised,” Klenk said. “I know there has been a lot of changes happening.”

“We’re crossing a line in 16 months that will only be possible with you,” Barnes said, calling all in attendance and across the university to come together amidst change.

Nancy Brule, chair of the communications department, felt a sense of contentment as she heard Barnes announcing his retirement.

“You could tell they had peace about it and they felt like they had done what God called them to do,” Brule said. “I was happy with them.”

Brule also mentioned how throughout Barnes’ time with Bethel, she has seen his Christ-like character shine.

“He [Barnes] has shown us what Jesus really looks like,” she said. “In the way he has led, in how he’s been compassionate…I see Jesus in him.”

Barnes said afterwards that he feels a sense of peace about his upcoming retirement.

“I am ready for this,” Barnes said. “I’m excited about ending well.”

He said too that the relationships created at Bethel are something he holds dear.

“Barb and I love this place and love our students.”

The special chapel was wrapped up with prayers over Jay and Barb, the Bethel community, future president and the transition that Bethel has ahead of them.

We’ve compiled a video of students and staff, who enjoyed sharing their favorite Jay Barnes memories, moments and interactions.