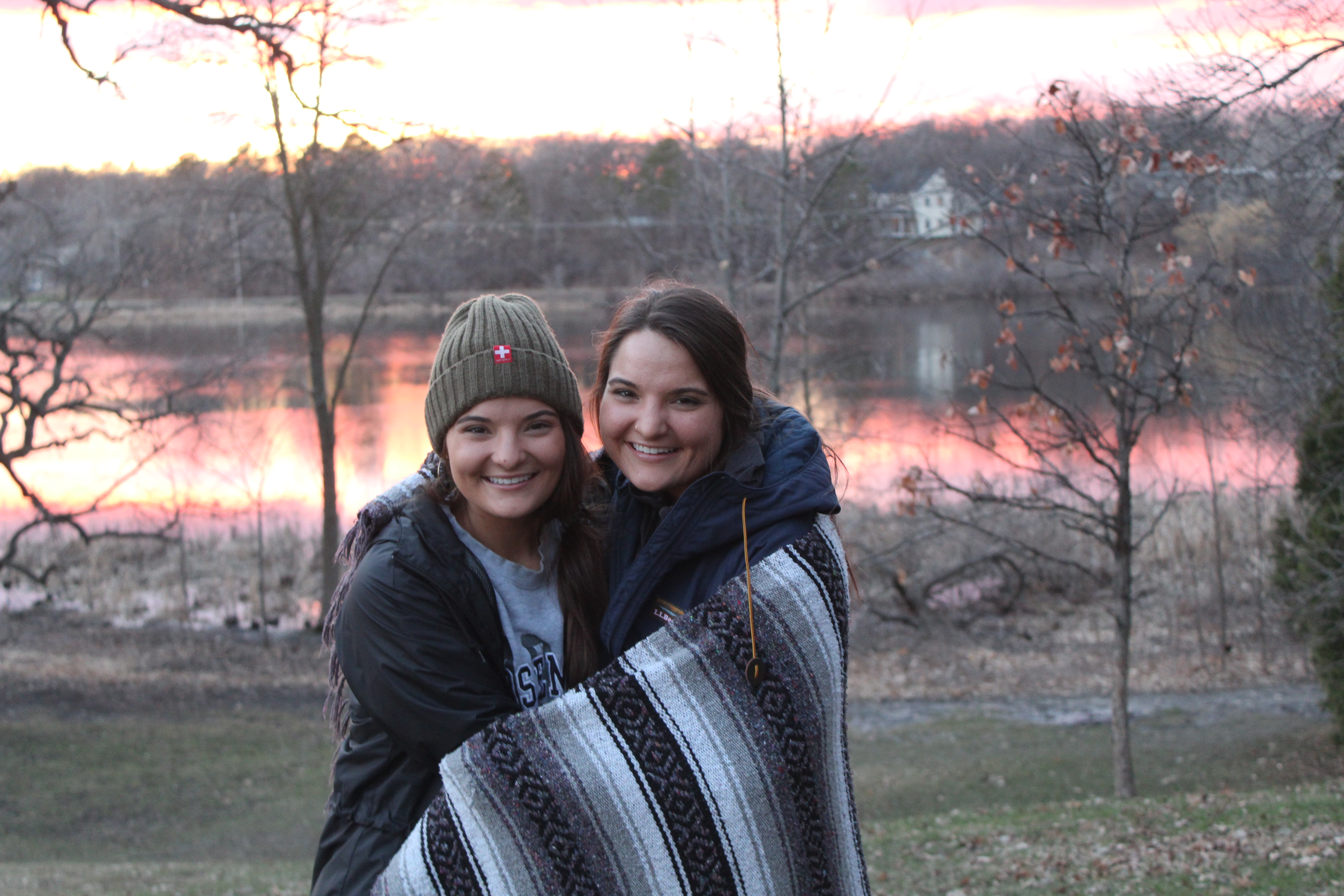 Interview and photo by Laura Osterlund

Halle: I am older by two minutes.

How are the two of you similar?

Hadley: We both did all the same sports growing up, and we both are passionate about art and science.

Hadley: We have similar friends, but we also have different friends.

Halle: I would like to say though, with all of this, I feel like we’re kind of equally similar and equally different. I feel like sometimes we’re so much alike, and we are identical and stuff, but we still definitely have our differences, and I think that balances us out a little.

Hadley: College has let us find our individuality.

Halle: I also think we’re similar just with certain things we like and similar styles, but not exactly the same. Like we still have our own individual clothes and sometimes we share, but yeah.

How are you different?

Halle: We do have different personalities.

Hadley: I am maybe more organized and I’m more structured I would say. I like more structure and we’re both pretty spontaneous, but I like to have a plan and get it done and execute it.

Halle: And I’m a little bit more laid back.

Halle: And that’s kind of how we balance each other out a little bit.

Are the two of you best friends?

Halle: We grew up calling each other our built-in best friends. We always did sports camps together, like, we’d go to colleges and do the overnight camps, and we’d always have a roommate for that or do things or social events.

Hadley: We’d always have someone to go with, and it’s always good.

Halle: We’ve become closer now that we’ve been out of state. Like, at school, we have different classes for the most part, but then when we do get see each other at the end of the day or at lunch or something that’s fun, cause we don’t see each other as much as we did.

Halle: We are roommates, but freshman year, we decided to live in the same building on the same floor with different direct roommates.

Hadley: We lived on first-floor Getsch, and we lived on opposite sides, which was good because then we could just go down the hall if we needed something, but we had our space.

Halle: Yeah, we’ve never been direct roommates at school, we did when we were really little, but not direct roommates. But we live in the same complex, and we’re going to live in a house together next year.

What is the longest time that you two have been apart?

Hadley: A month. But this summer it will be three months. Unless I go visit Halle, cause she’ll be in California.

How often do people mix the two of you up?
Hadley: On the daily. Every single day.

Halle: Don’t feel bad about it, it happens to everyone. It’s kind of funny.

Hadley: And since our names are so similar, like Halle and Hadley, you might know who I am but say the wrong name. So, it happens all the time, but we’re used to it and we answer to both names.

Halle: Yeah, we tell each other everything. I mean, maybe not unimportant things, but everything that actually matters. And we basically, unintentionally, we debrief each other of the day every single day. Like we just have conversation if we don’t see each other for the whole day.

Is there anything that the other twin doesn’t know?

Halle: Sometimes I use your stuff without asking.

Hadley: Same. I sprayed your perfume yesterday. I used your shampoo the other day.

Do you have any twin powers or twin connection? Such as, if one of you was in pain, would the other one feel it?

Hadley: I kind of feel like that, but I think it’s too empathy, like when Halle had to go get stitches, I didn’t go, but I was crying in class cause I felt bad.

Halle: When Hadley’s tense, I feel tense when I don’t know why, and when I’m just being really relaxed, but I’m tense too. But I think that’s just because you are.

Hadley: But actually today, we were in the car, listening to music, and Halle queued a song on Spotify and in my head, I’m like ‘I feel like she’s going to play that song’ and we hadn’t talked about the song in forever. Or sometimes, I’ll be singing a song in my head, and right where that song ends, Halle will just start singing out loud. But I feel like that happens to super close friends.

Halle: We did use to have our own language when we were babies. A lot of twins have that, and then they start talking later because they have each other to talk to and communicate with before they start speaking English.

Do you think you’ll always be close?

Hadley: For sure. Our hypothetical dream is to have a store together and be entrepreneurs together, and have kids at the same time… I want our kids to be friends.

What is the best part about being a twin?

Hadley: I think it’s such a close relationship because you have the same DNA, you’re in the womb together, you grew up together your whole life, you know, it’s just like having a best friend all the time.

Hadley: But we also know how to get on each other’s nerves.

Hadley: Sometimes we’ll be fighting, and I’ll be like ‘oh my gosh Hadley… I mean Halle’ it’s kind of funny.

Halle: I’ve totally called myself Hadley before, it just happens.

How can people tell you apart?

Hadley: I have a mole on my nose.

Halle: And I have a nose ring. Currently, our hair is the same length, so that makes it hard for people.

Hadley: I love being a twin. I hope I have twins.

Halle: I’ve totally faked being Hadley in the hallway if somebody says ‘hi’, I just go with it. I feel so bad about it. Sometimes you just have to, in the middle of the hallway, you can’t just totally be like ‘hey, sorry, wrong twin, see ya.’ You know what I mean?