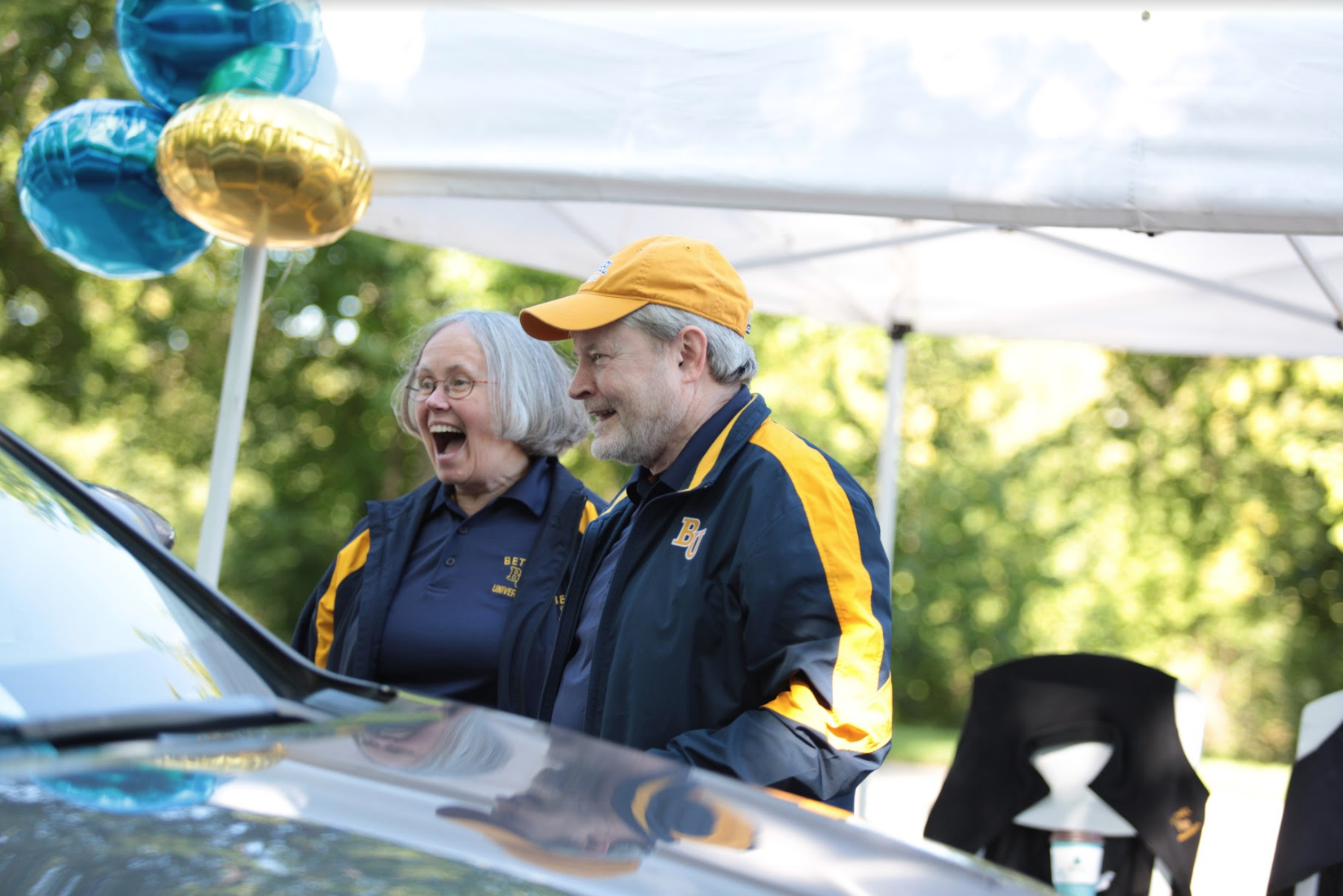 President Jay Barnes has been welcoming new freshmen as they drive onto campus for the past 11 years, but due to his upcoming retirement, this year marks the end of a tradition.

Jay Barnes welcomed the class of 2023 with a fist bump. One for every student, parent and sibling he could reach through the driver’s-side window.

He wore a blue and gold Bethel tracksuit and approached idling cars packed with futon mattresses, plastic shelves and crying moms. One arm reached toward his new friends and the other held his wife, Barb, who sported the same apparel and the same smile as her husband.

They stood on the front lines of Bethel’s annual Welcome Week, a celebration of new students packed with activities, orientations, and people to meet. Jay and Barb were the first of those people, a tradition they have upheld for the past 12 years. But with Barnes’ upcoming retirement, the final car Thursday afternoon marked the end.

“This sends a message that at all levels, Bethel welcomes people,” Barnes said.

Ted Harro brought his son, Duncan, a freshman physics major, to campus Thursday. The Harros were met by Barnes, who happened to be an old camp counselor of Ted’s. The two chatted about the days at Deerfoot Lodge in upstate New York while Duncan moved in.

Parents who attended the Barnes’ engaged couples seminar during their time at Bethel moved in a new generation of Royals. Other alumni stopped to bless Jay’s retirement and thank him for his years of service. And some parents were just excited to meet the president.

“The greeting shows how personal Bethel is,” Harro said. “The whole campus is people-oriented.”

Mixed in with cars carrying freshmen was a white Jeep Wrangler with the top down. Social work professor Eydie Shypulski waited in the new student line with a bouquet of pink and purple flowers in plastic wrap. She had met Jay and Barb many times before, but wanted to meet them again.

She presented the bouquet as tears began to swell in her eyes. A single drop fell down her cheek as she thanked President Barnes.

She told him how she remembers attending chapel during her two-day interview and watching him stand up and hug a BUILD student who was sitting alone.

“Out of all the students, you picked him,” she said. “The love and kindness you show to these students is amazing.”

As the Jeep accelerated past, Jay and Barb smiled and turned toward the oncoming line of cars and trucks and trailers. There were more fist bumps to give. More parents to comfort.

And even though it won’t be the Barnes’ residence for much longer, they knew there were more students to welcome home.

0 comments on “The final welcome”