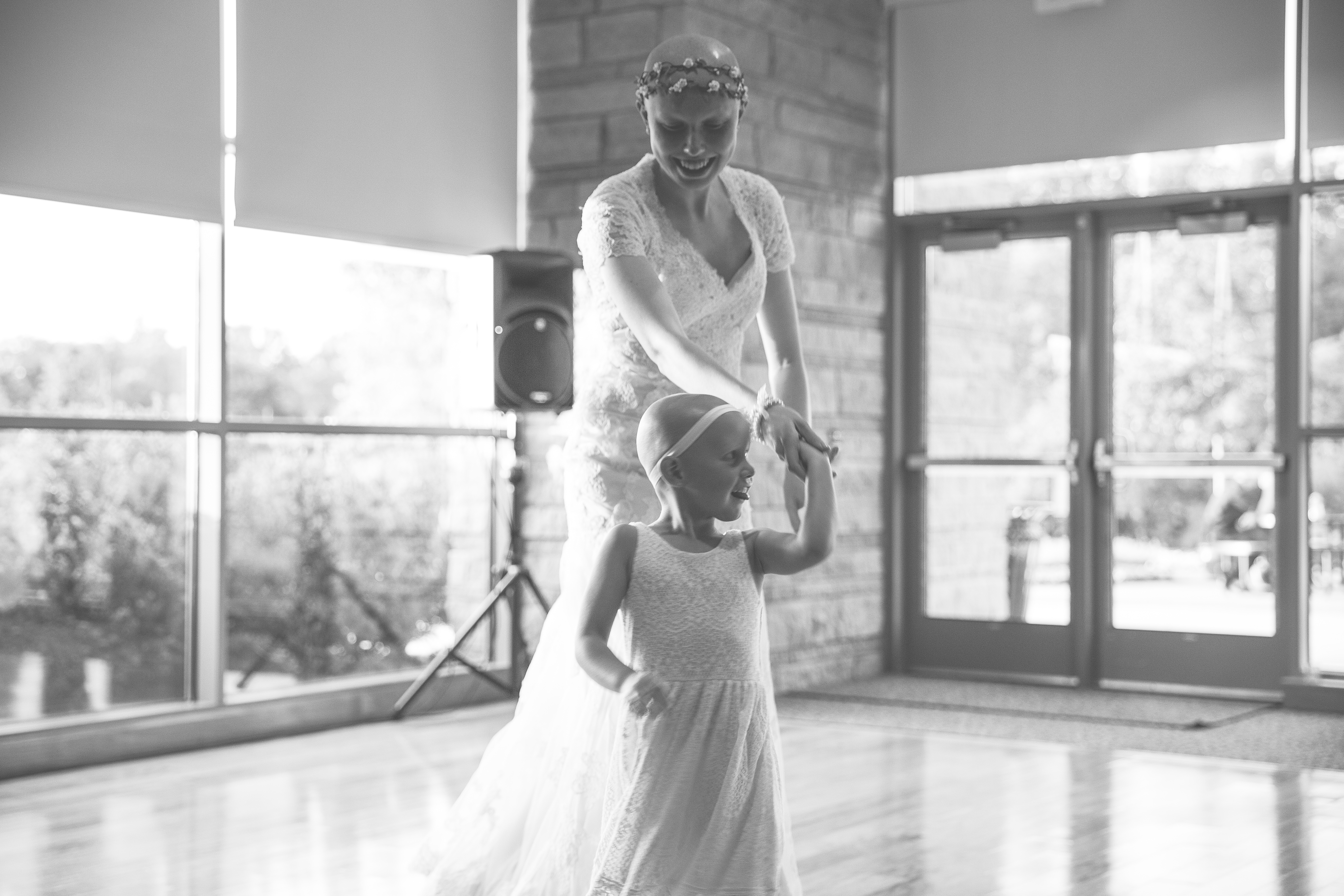 Alopecia, a hair loss disease, affects at least six students and faculty at Bethel University where, between physics majors and English professors, it has changed more than appearance.

Disclaimer: This story was originally written in the Spring semester of 2019, so student grade level will not align with current status.

Marah Smith got a free cookie whenever she went to Perkins because the manager thought she had cancer.

Another time, an employee at a Christmas-tree farm wrapped his arms around her and squeezed.

Then there was the lady who planted a kiss on her cheek in a grocery store aisle.

“I want you to keep fighting,” she said.

But there was nothing to fight.

Smith, a missional ministries and communication major at Bethel University, doesn’t have cancer. She has alopecia, a hair-loss disease that affects 2 percent of the American population. It causes bald patches that may lead to complete hair loss. The definite cause is unknown, and, aside from temporary treatment, there is no confirmed cure.

“It gives me a platform to share my story.”

Kyle Wahlberg, a physics student at Bethel, shaved his head on picture day. His fourth-grade classmates lined up wearing polos and khakis and clip-on ties. The popular boys had mohawks slick with gel. The girls had French braids. Kyle had a wave of hair that covered his ears. The last hairstyle he would ever have.

Laura Gilleland’s doctor told her she was too stressed. That’s why her hair was falling out. That’s why the drains were clogged and her pillow had to be cleared of strands every morning. Her mom thought it was the sun. A higher SPF would fix it.

Sixteen years later, it’s still not back. And she doesn’t want it to be.

“I enjoy being bald,” Gilleland, a marketing employee and former admissions counselor at Bethel, said. “It gives me a platform to share my story.”

Wahlberg’s hair was almost long enough for a flow. Brown and thick enough that he could run his hands through it during tests. During a spelling test in fourth grade, he concentrated on a word and lifted his hand to his scalp. When it returned, a ball of hair sat in his palm.

It kept coming out. The doctors diagnosed him with alopecia. The next day, picture day, his parents drove him to the hairdresser where a buzzing razor delivered his final cut.

A day after, he asked his teacher if he could stand at the front of the classroom and address the other students. Wide eyes stared just above his own. He explained his condition. He didn’t have cancer, and he wanted everyone to know.

“It was an overwhelming cushion,” Wahlberg said. “It took the pressure off me.”

Gilleland’s was brown, too. She grew it out to shoulder-length until the summer before sixth grade. Two months was all it took. And it took it all.

Grade-school classmates would ask why she got to wear hats and bandanas. It was against the rules. No fair. She lowered her head and hurried past, hiding behind the colored fabric. They couldn’t know. Only her parents and closest friends. The sleepover friends. The hair-braiding friends.

She graduated to wigs come high school. But the hair never felt real, the strands too plastic compared to the delicate brown wave she once knew. And the lining would scratch against her scalp, bouncing and rubbing as she bounded over rubber tracks and cross-country trails. Her hair blew in the wind, but she couldn’t feel it.

The wig came off in ninth grade. She stood in front of her track and cross-country teams, who she had run with for years, and explained her condition. Her head was bare.

“I was trying to fit the ‘beauty is XYZ’ mold,” Gilleland said. “Beauty doesn’t mean having hair.”

There are at least six students and faculty living with alopecia at Bethel, where bald heads flash among seas of brown and blonde. But a focus on chapel attendance and anatomy flashcards and vanilla lattes might get in the way of asking questions.

Questions about our differences. About why we have no eyebrows. Or why we cover our heads with bandanas and headbands and baseball caps. Or why we don’t look sick.

The six individuals say they’re happy to tell people they don’t have cancer, and that snapback hats are uncomfortable, or that it’s difficult to look in a mirror.

They’ll tell their stories. We just have to ask.

“Bethel people assume you have alopecia,” Wahlberg said. “It’s the first place where it’s been a norm.”

A former admissions counselor, Gilleland would greet students during Bethel’s Welcome Week with a wide smile. One of those students was Connor Malcolm.

Malcolm stood at the check-in desk and locked eyes with Gilleland, who handed him his room key. Their heads mirrored each other.

“Do you have alopecia?”

Their palms connected in a high-five before Malcolm moved into his new home. A home where he was surrounded by strangers but now knew someone just like him. A part of his new family.

Family to Malcolm was opposite the middle-school bully who would call him cancer patient on the playground. Opposite the doctor who accidentally prescribed 100 times the dose of a scalp cream and covered Malcolm’s head with blisters.

Family was Logan Pantila, his best friend who would play baseball and football on summer afternoons and Madden and NBA 2K at night. And who would never talk about the fact that his buddy was bald.

“He’s there for you no matter what,” Malcolm said. “He doesn’t care what you look like.”

Other kids thought Wahlberg looked like an alien. Someone from Star Trek. A cancer patient.

High-school classmates and teachers would make sure he was eating well. They wanted him to be happy. To laugh and live a good life while he still could. They knew cancer killed. Beyond hair follicles, alopecia doesn’t.

His condition gave the athletic crowd playing football during recess another reason to exclude him. They didn’t want the tall guy. The bald guy.

His mom would spread a cream on his scalp that did nothing more than extract all the moisture from his skin and make his head itch. He bought bandanas online until the site went down, then he had his aunt make them.

A substitute teacher once forced him to take his bandana off. He had signed the form. Cleared it with the school. After a few minutes of arguing, Wahlberg buckled. He pulled the cap from his head and exposed his insecurity.

Smith gave up treatment after four years of weekly steroid injections to her scalp. As the needle pierced her skin, she would add a tally to the running total she kept with her mom that diverted her attention away from the pain. After four years, it was more than 1000.

“I was so young,” Smith said. “I needed something to distract me from the injections.”

She went bald the summer before eighth grade. During the treatment, only patches of hair had fallen out. Patches that caused her teacher to insist she wear a Minnesota Gophers baseball cap with fuzzy yellow gopher ears on the sides.

Smith’s sister, Jordan, lost her hair to alopecia in the same summer. But it grew back. Now, six years later, Jordan has brown locks that stretch to her mid back. Marah has a headband.

“I’m not putting all my hope in that one scenario,” Smith said. “When I was [visiting] the doctor … they would say that alopecia is something that’s different for everybody.”

After Smith and her sister were diagnosed, their grandfather joined. At age 60, he lost patches of hair to alopecia. Still, there is no confirmed genetic cause.

Scott and Jake Winter both have it. And they’re father and son. Winter teaches journalism and English at Bethel and his son Jake is a senior psychology major.

“The best thing for Jake would have been for his hair to come back,” Scott said. “The second best thing would be for me to get it.”

When the two would go to Taco Bell, old men would see Jake’s bald head and give him quarters for the gumball machine. Kids in his class would touch his scalp because it was soft. He started wearing a baseball cap the next year.

Come fifth grade, Jake only wore hats outside of school. When he walked the halls, his Royals and Braves and Twins caps stayed home. He didn’t want to ask if he could break the no-hat rule.

“I couldn’t imagine what I looked like with hair,” Jake said.

Scott remembers what he looked like. A black mop that would cascade over his shoulders. He was the hippie professor at the University of Nebraska where he taught journalism. His wife jokes that his hair was one of the main reasons she dated him.

When he stood in front of the mirror in the upstairs bathroom, he couldn’t find the electric razor. He threw open drawers and chucked towels and straight razors against the wall. Then he found it.

Two minutes later, he was no longer the hippie professor.

He doesn’t remember the last time he looked in a mirror. When he washes his hands in a Bethel bathroom, he keeps his head down.

The two sat on a park bench under the L-train in the Woodlawn community of Chicago where Wahlberg was serving during a mission trip. The man wore a leather coat that was too big for him and stored his life in a clear plastic garbage bag that was propped against the bench.

Trip took place the summer after his freshman year of high school in Grayslake, Illinois, their mission that day being to find someone in need of a meal and a conversation. So the two ate and talked.

“He had quite the life story. Trial after trial after misfortune,” Wahlberg said. “But he was still calm … a very gracious guy. That really struck me.”

Wahlberg listened as the man finished his sandwich and his story. That night, back at the church, he broke into tears in front of 20 fellow students and leaders.

He realized the Star Trek comments and playground football rejections weren’t that bad. They hurt in the moment, but he was okay now.

“Compared to so many trials out there, alopecia is not terrible,” Wahlberg said. “It’s not killing me, and there’s so many things that could.”

There are no alopecia support groups at Bethel. No bake sales to raise money for treatment. No campus-wide march to find a cure. There are just people.

Wahlberg and Gilleland and Smith and Malcolm and the Winters walk the same halls. They see each other and others see them.

“We go to places where people are like us,” Gilleland said. “There is representation here on campus.”

The Minnesota Gophers hat with fuzzy yellow ears used to set Smith apart. For Scott Winter, it was a black shoulder-length hairstyle transformed into patches covered in fabric with a bill. For Gilleland, it was the wig that scratched her scalp as she ran the 800 meters.

“Everyone has their own nuances that make them unique.”

The group of six within 2,900 are connected by a condition but set apart by who they are. Musicians and professors and physicists and athletes. More than just bald kids.

Alopecia is the reason why Wahlberg’s fourth grade photo is unlike his classmates. Why Smith wore a Minnesota Gophers hat and got free cookies at Perkins. Why Gilleland didn’t have her hair braided at sleepovers. Why Malcolm got a high-five before moving into his dorm. Why Jake Winter never had to pay for a gumball. And why his dad never looks in the mirror.

“Everyone has their own nuances that make them unique,” Gilleland said. “That’s something that I think … makes people really beautiful.”

0 comments on “No hair, new normal”